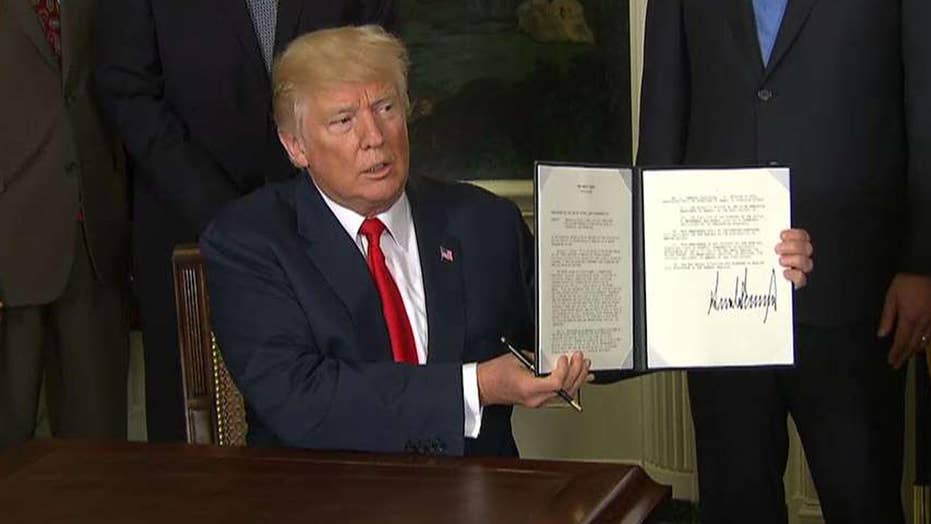 China seems to be not backing down from President Trump’s recent promise of a trade investigation of Beijing’s technology policies defiantly saying that they will “resolutely safeguard” their country’s interests.

Trade groups for technology companies welcomed Trump's order Monday but the Chinese Commerce Ministry said it violated the spirit of international trade and Washington's World Trade Organization commitments. The ministry said Beijing will take "all appropriate measures" if Chinese companies are hurt but gave no details.

Trump told U.S. trade officials to look into whether to launch a formal investigation into whether Beijing improperly requires foreign companies to hand over technology in exchange for market access.

"If the U.S. side disregards the fact it does not respect multilateral trade rules and takes action to damage the economic and trade relations between the two sides, then the Chinese side will never sit back and will take all appropriate measures to resolutely safeguard the legitimate rights and interests of the Chinese side," said a Commerce Ministry statement.

"We believe the U.S. side should strictly adhere to commitments and should not become the destroyer of multilateral rules," said the statement.

Beijing requires automakers and other foreign companies in China to work through joint ventures, usually with state-owned partners. They often are required to give technology to partners that might become competitors.

Over 20 companies that responded to a survey from industry group, the U.S.-China Business Council said that they were asked to transfer technology within the past three years as part of a condition for market access.

It was in April when Trump said he was setting aside trade disputes while Washington and Beijing worked together to persuade North Korea to give up nuclear weapons development. But American officials have resumed criticizing Chinese policy in recent weeks.

"The White House is right to make clear all options are on the table," said Robert D. Atkinson, president of the Information Technology and Innovation Foundation, an industry group in Washington, in a statement.