As the international community, including Chinese citizens, raises questions about the Chinese government's tally of coronavirus cases and the communist nation's mortality rate, new details are emerging about just how far off official government calculations have likely been, Fox News has learned.

Last week, the People's Republic of China increased their official count of fatalities inside Wuhan, the epicenter of the virus outbreak, by 50 percent in just one day, increasing the overall tally by 1,290 people.

Now, a Trump administration official tells Fox News they estimate the PRC has miscalculated and underreported the true tally nationwide by at least a factor of 50. “PRC numbers as reported today seem to be arithmetically impossible,” the official said.

“Again, we don’t know the real numbers today, but we do know the about 80,000 infections and 4,000 deaths as reported by the Chinese Communist Party propaganda are not even remotely close,” the person added.

Intelligence sources, asked about recent reports of funeral homes in Wuhan becoming overwhelmed by the volume of new corpses and plagued by a shortage of urns to hold virus victims' remains, declined to confirm the existence of classified satellite images. They did affirm, however, that the reporting is within the realm of possibility based on the evidentiary record. 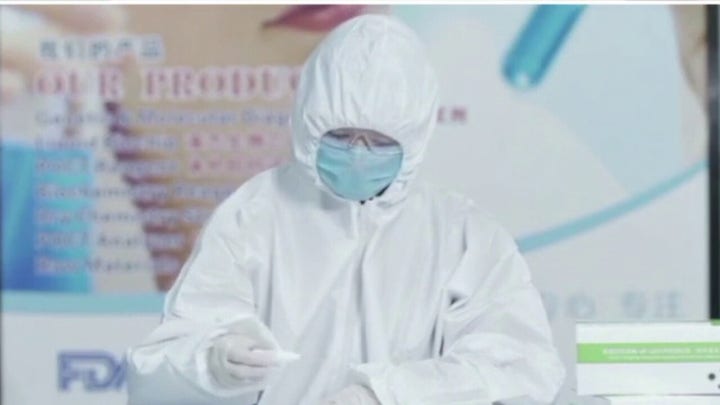 In support of this claim, officials point to the existence of seven funeral homes inside Wuhan city with a total incineration capacity of about 2,000 corpses per day. They also flag recent reporting that incinerators have been in near-constant use for 24 hours per day over the past several weeks. They note that, at this rate, the city's incineration capacity nears 60,000 corpses per month.

Sources also tell Fox News that between March 23 and April 4, the city-wide goal included the return of 500 urns to Wuhan families per day, or about one urn per minute of each day, in accordance with official social distancing recommendations. This goal was enacted in order to support the national Qing Ming festival, a day in which Chinese citizens traditionally honor deceased relatives. Based on this official guidance, sources arrive at a lower-end total tally of 45,500 corpses incinerated and returned to their families during this 13-day period.

Fox News first reported on April 15 that there is increasing confidence that the virus likely escaped from a Wuhan lab -- where it was being researched -- not as a bioweapon but as part of a Chinese effort to show that its efforts to identify and combat viruses are equal or greater than those of the U.S.

Sources point to the structure of the virus, in saying the genome mapping specifically shows it was not genetically altered. The sources believe the virus -- which was a naturally occurring strain that was being studied there -- was transmitted to a person and then went into the population in Wuhan.

Sources say the investigation of open source and classified data points to the work in the lab of Dr. Shi Zhengli, who was working on antivirals and immunizations for coronavirus, specifically with bats.

U.S. officials are 100 percent confident China went to great lengths to cover up after the virus was out, the sources said.

Additionally, the sources believe that the World Health Organization -- which the president paused funding to this week over its role in the crisis -- was either complicit in the coverup or looked the other way.