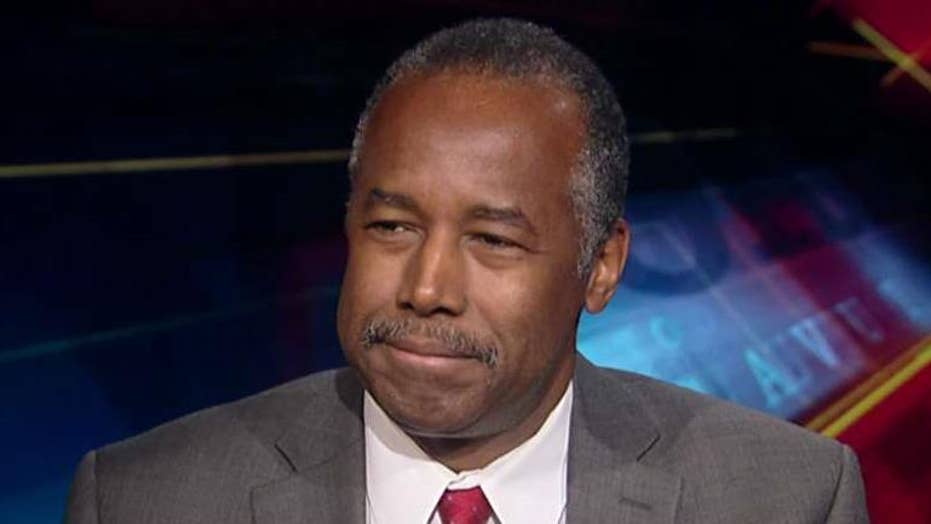 Former Republican presidential candidate weighs in on 'Your World'

It appears the doctor is in.

The source said Carson would consider Trump's offer over the Thanksgiving holiday before making a final decision.

On Tuesday, Carson told Fox News' "Your World with Neil Cavuto" that the HUD position was "one of the offers [from Trump] that is on the table."

Minutes after Carson left a meeting with Trump at Trump Tower Tuesday, the billionaire mogul tweeted: “I am seriously considering Dr. Ben Carson as the head of HUD. I’ve gotten to know him well—he’s a greatly talented person who loves people!”

BEN CARSON WOULD GIVE SERIOUS CONSIDERATION TO CABINET POST

On Sunday, Carson told “Fox Report Weekend” he was open to accepting a spot on Trump’s White House team.

“Basically, I’ve said my preference is to be outside and to act as an adviser, but if after going through the process they all conclude it would be much better to have me in the Cabinet, I would have to give that very serious consideration,” Carson said.

The walk-back followed Carson friend and business manager Armstrong Williams’ comments to The Hill on Nov. 15, during which he said Carson “feels he has no government experience, he’s never run a federal agency. The last thing he would want to do was take a position that could cripple the presidency.”

Later that day, Carson tried in a Facebook post to tamp down the embarrassing statement, noting his decision not to seek a Cabinet post “has nothing to do with the complexity of the job as is being reported by some news outlets.”

It’s previously been reported that Carson could be considered for a variety of department secretary jobs, including Education, Health and Human Services and Veterans Affairs.

The HUD position is at first blush a surprising fit for Carson. However, Carson has previously shown an interest in the department. In June 2015, Carson criticized HUD for “overreach” for forcing the city of Dubuque, Iowa to weigh housing voucher applications from Chicago the same as it did applications from Dubuque residents.

“This is just an example of what happens when we allow the government to infiltrate every part of our lives,” said Carson, then a Republican presidential primary contender and an adversary of Trump. “This is what you see in communist countries, where they have so many regulations encircling every aspect of your life that if you don’t agree with them, all they have to do is pull the noose.”

Carson also wrote an opinion piece for The Washington Times in July 2015 on HUD’s policies to “desegregate” housing.

“There are reasonable ways to use housing policy to enhance the opportunities available to lower-income citizens,” Carson wrote, “but based on the history of failed socialist experiments in this country, entrusting the government to get it right can prove downright dangerous.”