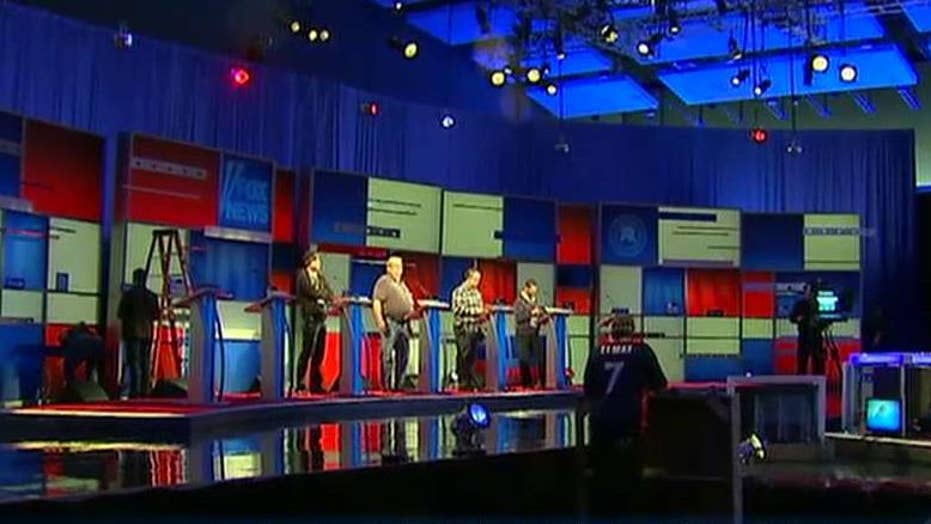 The seven Republican presidential candidates who've accepted the invitation to participate in Thursday night's Fox News/Google debate are trying to step into the spotlight Donald Trump vacated when he decided to boycott the Iowa showdown.

For the first time, Texas Sen. Ted Cruz will be center-stage at the prime-time event. He is fighting to regain lost ground over Trump in the Iowa polls, and is widely expected to train his attacks Thursday night on the missing front-runner.

“I think it's stunning Donald has refused to do it,” Cruz told Fox News.

But without the kind of Trump-Cruz war of words that dominated the last Republican debate, other candidates may have a better chance of breaking through at the showdown in Des Moines.

Democratic strategist Doug Schoen said Florida Sen. Marco Rubio, who is third in most Iowa polls, has a chance to go after Cruz Thursday night and emerge as a top debate finisher by Friday.

Indeed, Trump’s absence could make Cruz the focus of many other candidates’ attacks.

“By taking himself out of the action, [Trump] creates a dynamic where another candidate, whether it be Rubio, perhaps [Jeb] Bush or somebody else can emerge,” Schoen said.

Bush -- who has struggled at virtually every debate to land a knock-down blow against top rivals – is, like Cruz, still taking shots at Trump ahead of the face-off Thursday night.

If @realDonaldTrump can’t handle the @FoxNews debate, what else will he not be able to handle?

“It’ll give us more time to talk,” Christie told Fox News. “And that’ll be good for me and good for the other people on the stage.”

The debate marks a particular opportunity for Kentucky Sen. Rand Paul – who did not qualify for the recent Fox Business Network debate but will now return to the prime-time stage after making the cut this time.

Paul, though, continues to struggle with low poll numbers.

The seven candidates on the prime-time stage in Des Moines at 9 p.m. ET will be:

Santorum and Huckabee, after the evening debate, both plan to attend a veterans event that Trump is holding nearby in Des Moines.

The debate will be the candidates’ last before the Iowa caucuses on Monday.

The polls in the Hawkeye State show essentially a two-man race for first between Trump and Cruz. Rubio has been holding steady in third position, while Carson’s numbers have been on a downward course in recent weeks.

After Iowa, the candidates head to New Hampshire, where Trump also leads but several other candidates are jockeying for position behind him.

Cruz’ campaign is deploying a substantial ground operation in a bid to overtake Trump in Iowa, a state the campaign considers crucial.