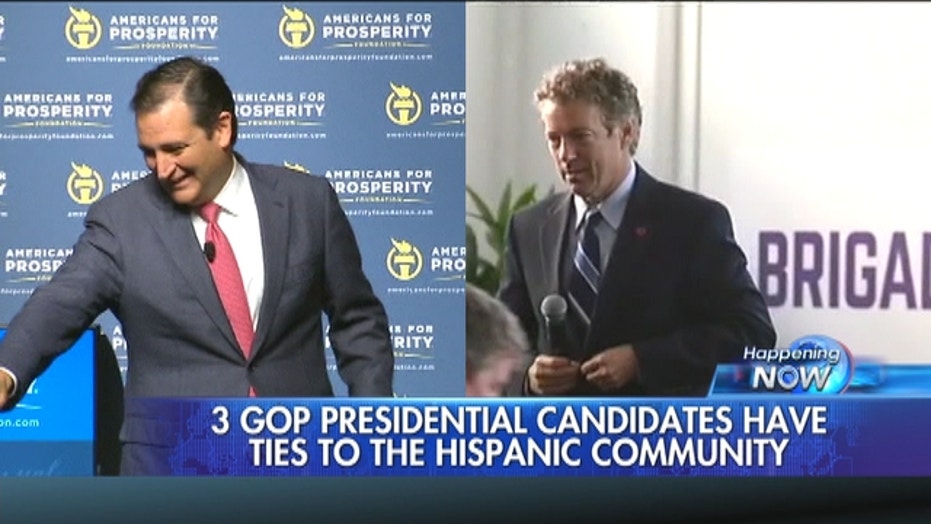 How can the GOP attract Hispanics?

From the party level to individual candidates, Republicans are attempting to recapture the Bush magic with Hispanics – determined not to repeat the mistakes of ’08 and ’12.

On Election Day 2012, early exit polls indicated a looming disaster for presidential candidate Mitt Romney.  His support among Hispanic voters was only in the mid-20’s – a decline even from the terrible 31 percent performance Senator John McCain put in four years earlier.

When all was said and done, Romney drew just 27 percent of Latino voters.  His collapse among this important voting group can be traced back to his comments at a debate January 23, 2012 in Tampa, in which he said his solution to the problem of undocumented immigrants in the United States was “self-deportation”.

“You know, saying self-deportation caused a lot of people who are Latino who were inclined to vote Republican, who were center-right to say ‘they don’t respect my community’,” Rove told Fox News.

Hispanics are the fastest-growing demographic in America.  According to 2013 census figures, 17 percent of the population is Hispanic.  In the next 40 years, that number is expected to rise to 25 percent nationwide.  In states like California, it will likely surpass 50 percent.

“It’s a trillion dollars in purchasing power,” says Hector Barreto – who ran the Small Business Administration under Bush 43.  “It’s a young and upwardly mobile community.  So, you ignore that community at your own peril.”

Barreto was part of the team that helped President Bush amass 44 percent of the Hispanic vote in 2004, an increase of almost 10 points from the 2000 election.  Bush did it, says Barreto, by dispatching Spanish-speaking surrogates across the country two years before the ’04 election to engage the Hispanic community.  And the President himself embraced Latino voters in a way few Republicans had before.

“He felt very comfortable in the Hispanic community, spoke a little bit of Spanish and people really liked him,”  Barreto told Fox News.  “They didn’t always agree with every position, but they liked him and they knew he liked them.”

From the party level to individual candidates, Republicans are attempting to recapture the Bush magic with Hispanics – determined not to repeat the mistakes of ’08 and ’12. The Republican National Committee launched a highly-publicized outreach campaign two years ago, hoping to convince Latinos that Republican policies are more in-step with their concerns than Democrats.

“I think it’s communicating the values that are important to the Hispanic community,” says George P. Bush, the son of Jeb Bush and the recently elected Texas Land Commissioner.  “The Hispanic agenda is the American agenda.  Hispanics want stronger schools, want more economic opportunities, are strong on family values and believe in a strong national defense. “

Those, says Bush, are “natural areas of consensus” between Latinos and the Republican Party, even though most Hispanics are registered as Democrats.  Republican South Carolina Senator Lindsey Graham agrees, saying the two should have a natural affinity for each other.

“[Latinos are] very much aligned with the Republican party,” Graham told Fox News.  “But I’m not going to vote for a party that I think’s going to deport my grandmother.”

Graham, who along with Senator Marco Rubio helped pass comprehensive immigration reform in the Senate says the Republican Party’s ‘tone’ on immigration threatens to keep Republicans out of the White House for the forseeable future.

“You think it’s an accident we’ve gone from 44 percent to 27 percent? Some of the debate around immigration has turned Hispanic voters off to Republicans,” Graham told Fox News.

With no ‘fix’ to the immigration issue on the horizon, the 2016 candidates are taking more nuanced positions as a way to repair relations with Latinos.

Rubio, who earned widespread criticism from conservatives for his role in the “Gang of 8” immigration bill has backed away from comprehensive reform, saying the U.S. needs to secure the border first.  And, he insists, Hispanic voters should have no quarrel with that.

Similarly, Jeb Bush is promoting the idea of border security, though he also insists there must be a path to status for the millions of people who crossed the border illegally.

Of all the 2016 candidates, Bush – who hasn’t yet officially declared – probably has the most robust Hispanic voter outreach operation.  He personally delivers messages to Latino voters in fluent Spanish.  He recently hired Jose Mallea as his campaign manager for Hispanic outreach.  Mallea was a big steal – he was Rubio’s campaign manager in 2010.  Bush also appointed Emily Benevides as communications director for Hispanic media.  He has made Latino-specific campaign stops, including a recent visit to a bodega in Denver, and last month went to Puerto Rico.

” A lot of politics is showing up,” says Karl Rove.  “For too many years we’ve had too few Republican candidates on a national stage who have shown up in the community.”

Senator Ted Cruz is also reaching out to Hispanic voters – appearing at a meeting of the U.S. Hispanic Chamber of Commerce to take questions.  While not fluent himself, Cruz released a Spanish-language announcement video when he declared for President.  He has a Spanish-speaking staff, and his Cuban-born father Rafael is campaigning on Cruz’s behalf.

Senator Rand Paul has made several appearances targeting Hispanic voters and is putting together a group of Spanish-speaking surrogates to travel the country, engaging with Latino communities.

Perhaps the most natural connection to Hispanic voters is the one Marco Rubio enjoys.  A first generation Hispanic-American, his parents emigrated from Cuba dirt poor, giving him a family story that resonates with millions of Latinos across the country.  Fully fluent, Rubio transitions easily between Anglo and Hispanic audiences.  He could be a breakthrough candidate as the first Hispanic presidential nominee.  But he says – even with that pedigree and promise for the future - he doesn’t get instant buy-in from Latino voters.

“You have to earn that,” Rubio told Fox News.  “Just because my last name ends in a vowel, doesn’t guarantee me the vote of anyone.”

Rubio says all of the Republican candidates need to articulate a clear vision to Hispanic voters if they hope to make the inroads necessary to win the White House.

“Will I be able to perhaps initially argue to them and get a hearing?  Sure, I think my story tracks the story of many people,” Rubio told Fox News.  “But after that, they’re going to want to know what you stand for and what kind of president you’ll be.”

Hillary Clinton is aggressively targeting Hispanic voters, promising that as president she would do all she can to create path to citizenship for undocumented immigrants.  Her message:  She will do more for Latinos than any Republican is willing to.

Whether that message wins the day will depend greatly on how effectively Republican candidates can connect on other issues.  Will Latino voters be willing to wait for action on immigration if they think Bush, Rubio, Paul, Cruz, Scott Walker, Carly Fiorina, Mike Huckabee, Ben Carson or someone else can better address issues of economy, education, opportunity and national security?

One thing is certain: Republican candidates cannot afford to wait, experts say.  Hector Barreto says they need to be out there now, engaging with the Hispanic community one-on-one on an ongoing basis.  Treating Latinos like an afterthought, he says, will lead to another 2012-style disaster.

But he has high hopes for the Republican field.

“We’ve got a good bench this time,” Barreto told Fox News.  “We’ve got a number of candidates that get it, that understand it.  Some of them speak fluent Spanish.  And I think they’re going to do a lot better than people think this time around.”