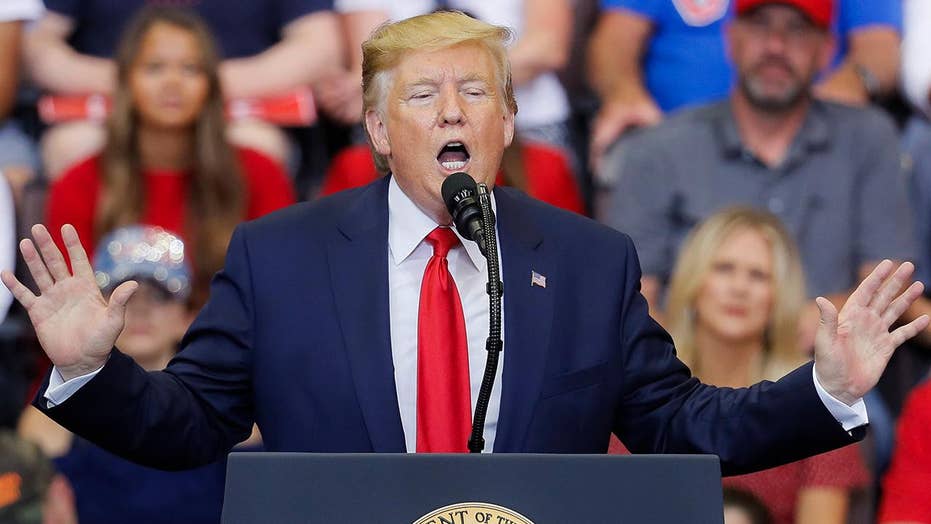 Podcast Host Dr. Drew Pinsky weighs in on the homeless crisis and the president's comments.

Four voters in California, along with the conservative transparency group Judicial Watch, announced Monday they have filed a federal lawsuit against the left-wing state, alleging its new law aimed at strong-arming President Trump into releasing his income tax returns is patently unconstitutional.

Democratic Gov. Gavin Newsom signed the law known as the "Presidential Tax Transparency and Accountability Act" last week. Its provisions would require Trump and other presidential primary candidates to file their tax returns for the most recent five years to the California secretary of state by November 26 or be excluded from the March 3, 2020 presidential primary ballot.

The law does not apply to the general election, so Trump would still appear on the November 2020 California presidential ballot if he secured the national Republican Party nomination.

The measure sailed through the state's Democratic-led legislature. Former California Gov. Jerry Brown had vetoed a similar version of the law last year, noting that it "may not be constitutional" and sets a "slippery slope precedent" that could lead the state to demand all kinds of documents from candidates.

"Today we require tax returns, but what would be next?" Brown asked. "Five years of health records? A certified birth certificate? High school report cards? And will these requirements vary depending on which political party is in power."

But Newsom, a frequent Trump critic who declared in June that the GOP is "finished" and will devolve into a third party, disregarded those concerns.

The four plaintiffs are two Republicans, one Democrat and one independent.

In their federal complaint, the plaintiffs call the law an unprecedented attempt by a state to add additional qualifications for the presidency.

In a statement, Judicial Watch President Tom Fitton said: "This is a nonpartisan concern about the state running roughshod and attempting to amend the Constitution on its own."

“California politicians, in their zeal to attack President Trump, passed a law that also unconstitutionally victimizes California voters," Fitton added. "It is an obvious legal issue that a state can’t amend the U.S. Constitution by adding qualifications in order to run for president. The courts can’t stop this abusive law fast enough.”

Attorneys for Judicial Watch argue California's law effectively alters the Constitution by adding a new requirement for tax returns, something they say state governments don't have the authority to do.

But Judicial Watch argues that rationale could lead states to demand things like medical and mental health records and eventually things like Amazon purchases, Google search histories and Facebook friends. Conservatives, who recognize that Trump stands no chance of winning California's electoral votes regardless of the outcome of this dispute, have similarly sounded the alarm about where these restrictions might go in the future.

Judicial Watch also argues that by limiting the law to primary elections, it does not apply to independent candidates. Judicial Watch also says the law violates voters' constitutional rights to associate with presidential candidates and the voters who support them, rights it says are guaranteed under the First and 14th amendments.

The lawsuit names Secretary of State Alex Padilla as the defendant because his office is in charge of enforcing the law. Representatives for Padilla and Newsom declined to comment on Monday, saying they have not been officially notified of the lawsuit.

When he signed the law last week, Newsom released statements from three lawyers, including the dean of the University of California, Berkeley law school, saying the law is constitutional.

"SB 27, which requires that presidential candidates disclose tax returns, is constitutional. It does not keep any candidate from being on the ballot so long as he or she complies with a simple requirement that is meant to provide California voters crucial information," Berkeley dean Erwin Chemerinsky said. "This is the state acting to make sure that its voters have information that might be very important to them when they cast their ballots as to who they want to be President of the United States."

President Trump has said he will not release his tax returns as long as they are under audit. (AP Photo/Evan Vucci, File)

"If the federal government is not going to act, California needs to act. We've always done that," Newsom said in a video posted to his Twitter account.

Citizens have had to pay federal income taxes since 1913, but it wasn't until 1973 when a U.S. president made his personal tax returns public. Republican Richard Nixon released his tax returns publicly while he was being audited by the IRS, after an IRS employee leaked a portion of his returns to the media.

Ever since, U.S. presidents have released at least a summary of their personal income taxes. That includes most major candidates for president, with some exceptions. Former California Democratic Gov. Jerry Brown did not release his tax returns when he ran for president in 1992.

In their lawsuit against California, the plaintiffs noted that  "one study found that 7 of 34 'major' candidates for president since 1976, or about 20 percent, refused to produce their tax returns."

The complaint specifically alleges violations of the Qualifications Clause of the Constitution, as well as the plaintiff's First Amendment rights to express their political preferences. Additionally, because the law only applies to party-affiliated candidates (non-party candidates do not participate in primaries), the suit also alleges a violation of the Constitution's Equal Protection Clause and a federal equal protection statute.

Trump has refused to release his tax returns, saying they are being audited by the IRS.