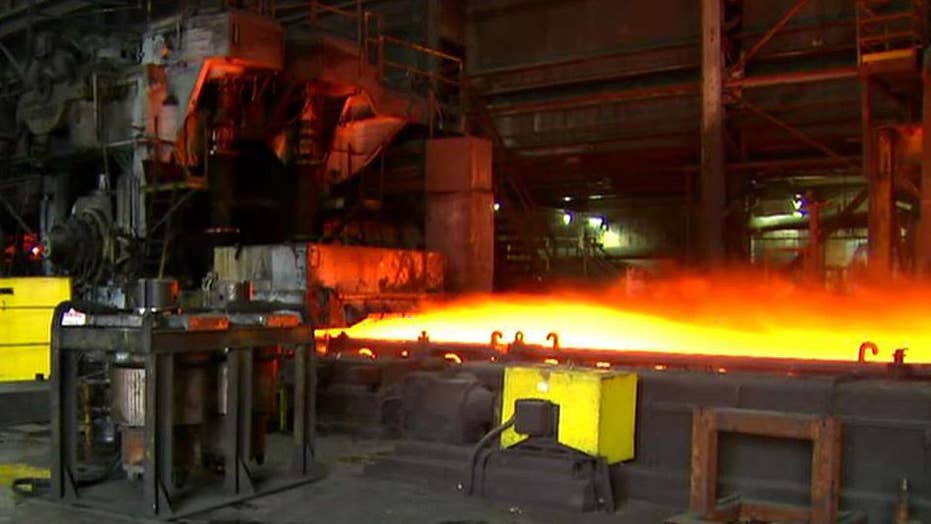 Some US steel companies warn of negative impact from tariffs

President Trump set to announce tariffs on steel and aluminum imports, But some U.S. producers say the 25 percent tariff will hurt them as well; William La Jeunesse reports from Fontana, California.

As President Trump moves to save steel workers on the East Coast, critics say his new 25 percent tariff could kill steel jobs in the West.

“A lot of us are looking to retire from this company and right now it is big concern because we don’t know what is going to happen,” said Howard Taylor, a steelworker here for 21 years.

California Steel is the largest steel plant on the West Coast. It took over when giant Kaiser Steel, the WW2 shipbuilder, went bankrupt 34 years ago. A consortium of steel companies from Brazil and Japan bought the plant and invested $1 billion to upgrade the process. Today, it’s model is different. Unlike integrated Rust Belt plants that mine their own iron ore, California Steel imports massive, unfinished steel slabs, turning them into coils, plates and pipelines it sells to more than 200 customers.

“If they impose tariffs on our slabs it will hurt our business,” said CEO Marcelo Rodrigues. “We are talking about saving American jobs right? We are American jobs.”

Rodrigues said there are two problems with the blanket tariff proposed by Trump.

One, Eastern Mills, could not or would not sell steel slabs to competitors fighting for the same market.

Secondly, transportation costs. Importing slabs from Mexico and Brazil by ship costs $20 a ton, he said, moving them by rail from the Midwest costs more than $100 a ton.

Each slab weighs 2 tons, making California Steel the largest costumer of the Port of Los Angeles.

The main driver behind the President’s tariff is dumping by China. The steel industry claims China, beset by overcapacity because of a slowing economy, has been shipping finished steel coils to the U.S. for as little as $200 a ton, when the going market rate today is closer to $500 a ton. China is shipping first to Vietnam, Turkey and South Korea, trying to hide the steels' country of origin.

“We just want fairness because we have not been treated fairly by these countries,” Trump said Thursday.

West of the Rockies there are only two steel plants. Both use imported slabs as feedstock. California Steel imports about 1.5 million tons of slab a year. At $500 a ton, a 25 percent tariff, adds $188 million of cost per year, passed on to their customers in oil and gas, heating and air conditioning and steel frame construction.

“The cost is the biggest thing that is going to hurt us as a company if this goes through,” said Taylor.

The company fears as prices rise, customers and clients will cut back, revenues will fall, leaving no money to invest in or grow the business, creating death spiral that leaves it where Kaiser Steel used to be.