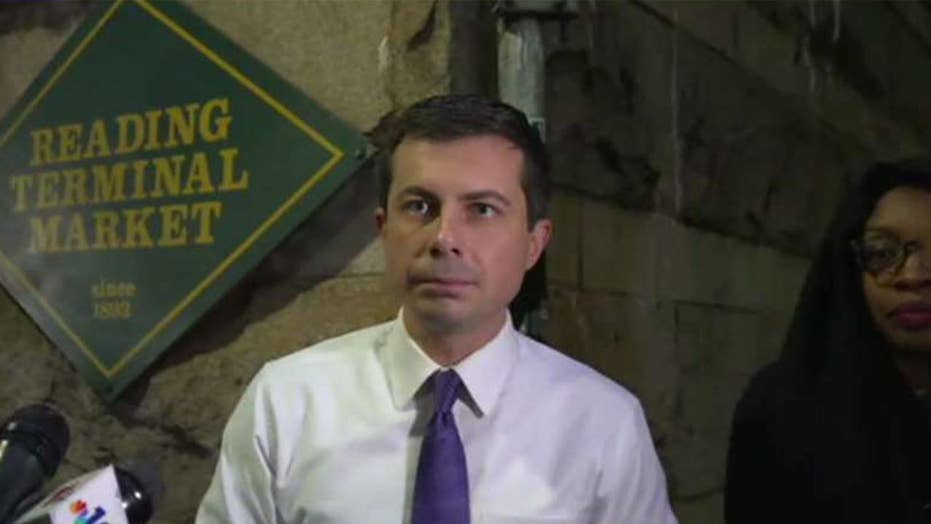 Mayor Pete concedes to smoking weed a 'handful' of times; the Democrat establishment is reportedly anxious about the current field of candidates.

Buttigieg, who grabbed headlines at this month's presidential debate for challenging Warren over how she’ll pay for her plan to implement a single-payer health care system, expanded on those concerns Wednesday.

NH PRIMARY GETS REAL AS FILING PERIOD GETS UNDERWAY

“I certainly think we all have a responsibility to explain how our plans are going to be paid for, and my concern about the plan she’s putting forward is not just the multi-trillion-dollar hole but also the fact that most Americans would prefer not to be told that they have to abandon their private plan,” Buttigieg said in an interview with Fox News and New Hampshire’s Concord Monitor newspaper.

"I want to create this public plan and then if it’s the right plan for everybody, everybody will want it," Buttigieg added. "If it’s not the right plan for some people, then some people will keep what they’ve got. I think that’s the best policy. It’s definitely what most voters, including what most Democratic voters, believe. And I believe those voters are not wrong.”

Warren supports 2020 rival Bernie Sanders’ Medicare-for-all plan. Sanders has repeatedly acknowledged that taxes for most Americans would rise to pay for the program but has claimed that most people would save money in the long run due to the elimination of premiums, co-payments and deductibles. Yet at this month's debate, Warren wouldn’t say if middle-class taxes would rise to pay for her Medicare-for-all system and pledged to unveil her plan for paying for it soon.

Warren also returned fire at Buttigieg on the debate stage, criticizing his health care plan as “Medicare for all who can afford it.”

Warren repeated her debate pledge while campaigning in New Hampshire Tuesday night, telling reporters: “I’ll have a plan out soon that shows both how much Medicare-for-all costs and how it is we’re going to pay for it. It’s coming out soon.”

Speaking with reporters Wednesday after filing at the New Hampshire State House, Buttigieg painted clear contrasts between himself and Warren and Sanders, the two populist standard-bearers in the large field of Democratic White House hopefuls.

“If as a voter you’ve decided you want the most ideologically left candidate possible, then of course you’ve already got your choice,” he said, taking an indirect jab at both Warren and Sanders. “But I think a lot of others are looking for real progressive solutions that can be achieved and that can command the support of a strong American majority. I think that’s where most Democratic voters are.”

And he vowed that if he won the White House, “I would be the most progressive president in my lifetime but I also would build out majorities to do these things in a way that can actually unify rather than further polarize the American people.”

Buttigieg arrived in the Granite State one day after a new poll from the University of New Hampshire for CNN put the one-time long-shot for the nomination in fourth place among likely Democratic primary voters, at 10 percent. Ahead of him were Sanders, I-Vt., at 21 percent, Warren at 18 percent, and former Vice President Joe Biden at 15 percent.

The 37-year old candidate, the youngest in the Democratic field, appeared to question Biden’s readiness.

“In order to win, we need to put forward a candidate who can demonstrate the readiness to lead this country forward. We’re going to have to turn the page. And it’s not as simple as going back to normal. We’ve really got to build up a new normal,” Buttigieg told Fox News.

“I’ll also say when it comes to electability, every single time my party has won the presidency in the last 50 years, it’s been with a candidate who’s new on the national scene, hadn’t spent a lot of time in Washington and represented a new generation of leadership. By contrast, every single time in the last 50 years we have put forward the most Washington-orientated candidate, we have come up short in November,” he added.

Hours before Buttigieg arrived in Concord, a new poll from Politico and Morning Consult suggested that 37 percent of registered voters said they were either definitely or probably not ready for a president who is gay.

And he emphasized that “serving up” answers for such pocketbook concerns, “I think is how we can get past a lot of old prejudices as America has time and time again proven itself capable of moving forward and not back on these issues.”

Buttigieg has already gone up with TV ads in Iowa, which votes first in the presidential primary and caucus nominating calendar. When asked if he’ll go up on the airwaves in the Granite State, Buttigieg pledged that “you’ll be seeing a lot of us here in New Hampshire, both in terms of our commitments with investments, our large and growing ground game, and the use of my time. Because I think New Hampshire is the state that will really catapult me towards success in the nomination.”

Asked where he needs to finish in New Hampshire, the candidate said: “I’m not going to set up the goalposts just yet.”

Pointing to Warren and Sanders, who hail from the neighboring states of Massachusetts and Vermont respectively, Buttigieg noted that “obviously there’s some competitors with a neighborhood advantage, but I do think that we can do well here and when we do, that that’ll be a key part of our path to the nomination.”