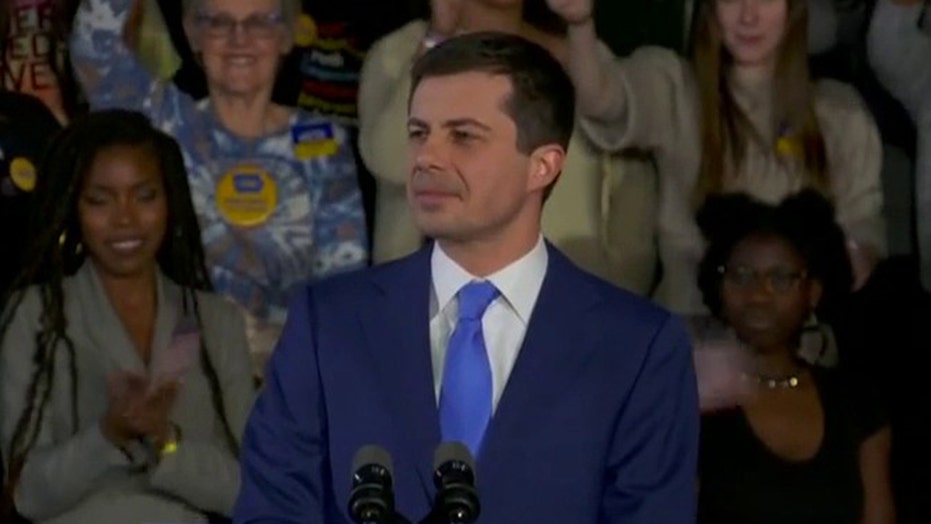 Pete Buttigieg was the first candidate to hit the ground running in New Hampshire Tuesday morning.

The former South Bend, Indiana mayor – coming out of what appeared to be a strong finish in Monday night’s Iowa Democratic presidential caucuses though no official results have yet been released – arrived in the state that holds the first primary in the race for the White House with apparent momentum.

After landing in the Granite State, Buttigieg was endorsed by longtime Nashua Mayor Jim Donchess at an early-morning campaign stop at a well-known café in the southern New Hampshire city.

It was the first of eight stops in New Hampshire on the day after the Iowa caucuses -- far more than any of his 2020 nomination rivals.

Still up in the air – the results from caucuses, which kick off the presidential nominating calendar.

The morning after a technical meltdown delayed the reporting of the results – causing chaos in the political world -- the Iowa Democratic Party blamed the debacle on a “coding issue” in its reporting app and pledged to release the caucus results starting late Tuesday afternoon.

Buttigieg needed a strong finish in Iowa. And a lack of official results didn’t prevent Buttigieg from pre-emptively claiming victory.

“So we don't know the results. But we know, by the time it's all said and done, you have shocked the nation,” the candidate told his supporters Monday night in Iowa. “Because, by all indications, we are going on to New Hampshire victorious.”

But Buttigieg tempered his language the next day.

In Nashua, N.H., Tuesday morning, he said “everything we know is extremely encouraging.“

But later in the morning, at a campaign event in Manchester – New Hampshire’s largest city – Buttigieg emphasized that “we quieted those voices who said we shouldn’t be there in the first place. Now it’s up to famously independent New Hampshire.”