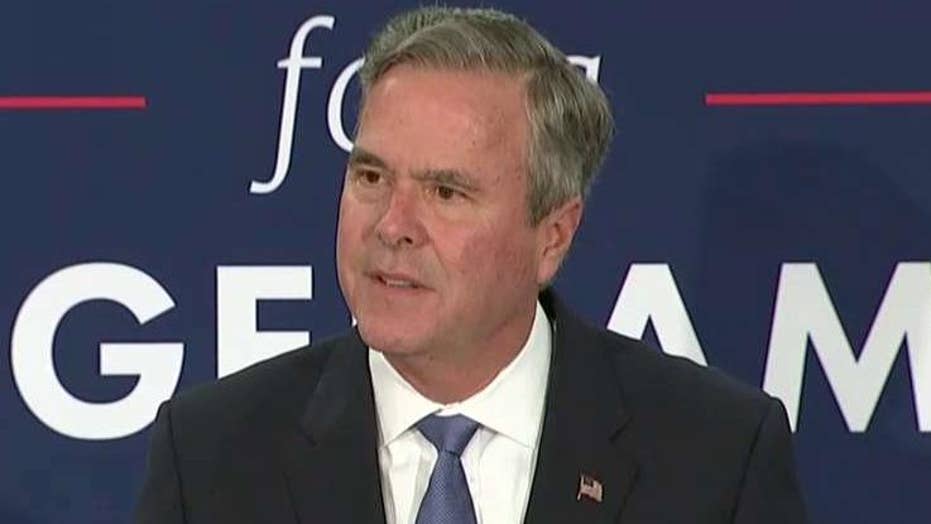 Following a disappointing showing at the South Carolina primary, the former Florida governor drops out of race for the White House

Republican presidential hopeful Jeb Bush suspended his once front-running campaign for the White House on Saturday, following a poor showing in the South Carolina primary.

“I’m proud of the campaign that we have run to unify our country,” Bush said. “But the people of Iowa and New Hampshire and South Carolina have spoken, and I really respect their decision. So tonight I am suspending my campaign.”

Bush was mired in single digits in South Carolina returns and had failed to place in the top three in any of the early contests. Bush, the former Florida governor, entered the 2016 presidential race as an early favorite, but steadily fell in the polls, despite having had a couple strong debate performances in recent weeks.

He added that he firmly believed "the American people must entrust this office to someone who understands that whoever holds it is a servant, not the master."

But Bush’s campaign seemed to struggle out of the gate. He first promised to run as his “own man” and distanced himself from his family but later relied on the Bush family name on the campaign trail.

The son of George H. W. Bush and brother of George W. Bush entered the race to huge expectations in June, and quickly fueled them with fundraising. Working with a super PAC that has supported his candidacy, Bush and allies raised more than $150 million by the end of 2015 -- far more than any of his GOP rivals.

However, Bush's presence in the race and fundraising potential wasn't enough to dissuade more than a dozen other Republicans from entering the race, including fellow Floridian, Sen. Marco Rubio.

His big-money super PAC raised just $379,000 in January, and most of that was from a single donor who'd also given the same amount to rival Marco Rubio. The group, Right to Rise, had blown through more than $85 million over the past nine months, largely on TV ads, bashing other candidates, most notably Rubio.

Meanwhile, Bush's official campaign -- which provided basic funding for his travel and political staff -- had less than $3 million in available cash as the month began. He had only been able to raise $1.6 million in January, despite a once-sprawling donor network.

Bush's failure to ignite was not simply a factor of the size of the GOP field. Bush, like others, was caught off-guard by the durable popularity of political outsiders -- particularly Trump.

The final stage of Bush's campaign became an all-out bout with the outspoken real estate mogul -- the two frequently referring to each other as a "loser." Bush took shots at Trump's lack of experience while Trump attacked Bush's family legacy, particularly the unpopular Iraq war waged by his brother George W. Bush.

Bush, meanwhile, offered himself as an experienced public executive and potential world statesman informed in part by his father's and brother's wartime presidencies. But it wasn't a case strong enough to translate into votes.

There were other problems as well. The policy-oriented Bush was overshadowed in early debates by Trump and Rubio, which dramatically slowed his early autumn fundraising.

Bush went on to finish sixth in the Iowa caucuses, but barely squeezed ahead of Rubio in New Hampshire for a fourth place finish. South Carolina was viewed as a last early voting state for Bush to make a mark.

While the South Carolina primary claimed Bush, neurosurgeon Ben Carson, who returns indicate will finish either last or second-to-last, has vowed to stay in the race.