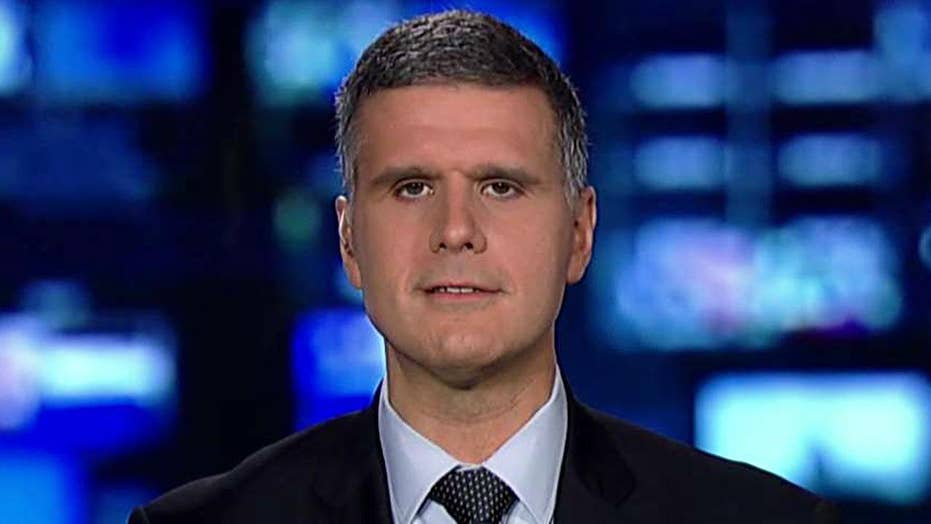 David Avella on the craziest laws taking effect in 2018

'Fox & Friends': Republican strategist weighs in as hundreds of new laws take effect at the start of the year.

From buying bullets to casting ballots, states across the country are ushering in a wave of new laws in 2018.

California’s recreational cannabis market will open its doors to residents beginning Monday at 6 a.m. Buyers 21 years or older will be legally allowed to purchase up to an ounce of marijuana and up to 8 grams of concentrates.

The Golden State joins two others – Maine and Massachusetts – that will legalize recreational pot use next year- bringing the total number of states to eight. But unlike California, residents in Maine will have to wait until July to legally light up.

The new year will also bring a boost in the minimum wage in several states.

The minimum wage jumps by 50 cents in California. Employees at companies with 26 or more workers will be paid at least $11 per hour. Businesses with less than 25 employees will be paid $10.50 per hour.

Changes to gun laws are also on the horizon.

California’s 6 million gun owners won’t be able to buy bullets online and have them shipped to their homes. A new rule requires purchasers to pick up their orders in person from a licensed vendor. The state is also clamping down on gifting assault weapons. Another new state law also prohibits people convicted of a hate crime from possessing a gun for 10 years.

In Tennessee, members of the U.S. military will be allowed to forgo the firing-range portion of the training requirement to obtain a handgun carry permit if he or she can prove they passed small-arms or combat-pistol training while serving.

New Jersey is carving out an income tax credit to mental health professionals who donate hours of counseling to members of Gold Star families.

The state will also provide Gold Star family members free or reduced-price admission to state beaches, parks, museums and forests. Fees will also be waived by the state’s professional and occupational licensing boards. Families will also be eligible for admission to Department of Military and Veterans Affairs homes and hospitals.

Texas and West Virginia will see new election laws in 2018.

Voters in the Lone Star State will be able to cast a ballot without a photo ID if they can show they have a “reasonable impediment” to getting one. In West Virginia, there will be more options on the types of IDs accepted at polling stations. Voters will be able to show traditional forms like drivers’ licenses and passports but will also be able to use non-photo IDs like bank debit cards, utility bills and concealed carry permits.

The new year will offer more protection to workers in New York who go on sick or family leave.

In New York, workers will be eligible for paid family leave to take care of a sick relative or to take care of a newborn, foster or adopted child. The law allows full-time employees eight weeks of time off. The leave period increases to 12 weeks in 2021.

Employers in Washington state will be required to provide paid sick leave to all employees. Under the new law, employees will earn one hour of sick leave for every 40 hours they work.

Kids caught sexting in Colorado will be subjected to a range of punishments including lengthy lectures and courses on the consequences of sharing nude pics online to being charged with a misdemeanor. In severe circumstances, they could be charged with sexual exploitation.

Domestic violence victims in Illinois will soon be able to break their cell phone contracts. The new law also lets survivors keep their phone numbers and save money on related costs for a new account when they leave their abusers.

If the cops catch someone using a handheld cell phone in a school zone in Tennessee, they will be charged with a class C misdemeanor and fined $50.

In 2018, pets will be elevated in status in Illinois. Dogs, cats and other four-legged fur babies will be fair game in custody battles. Judges will be instructed to take into consideration what is best for the animal during divorce proceedings.

The state is also banning elephants from circuses and traveling exhibits.

Oregon is looking to cash in on bike riders in 2018. Bicycle buyers will have to pay a flat $15 fee for each bike they buy that costs more than $200. Businesses will collect the cash during the sale of the bike and turn it over to the state every quarter. Oregon will also bump up its gas tax by four cents per gallon in January. Vehicle registration fees will jump by $13.

And finally, there may be a little more equality coming to women in Illinois in the new year. All dry cleaners, tailors and hair salons in the state will have to present a price list for services if anyone requests it.

“We all know that, historically, women have paid more for dry cleaning, haircuts and tailoring. So this law is really about transparency, and making sure women know what they’re paying for the same services men are receiving,” the bill’s sponsor, state Sen. Melinda Bush said.