Republican Senate candidate Josh Hawley says the Democrat should 'quit hiding' and stand up to her party on the Supreme Court nominee.

Judge Brett Kavanaugh goes before the Senate Judiciary Committee on Tuesday for confirmation hearings with what supporters call the longest paper trail – practically a superhighway – of any federal judicial nominee, a testament to his enviable insider status in public and private corridors of Washington power.

That impressive resume has created both political opportunity and peril, as Senate Democrats have demanded a go-slow approach so that Kavanaugh's records as a federal judge, White House staffer and lawyer for Independent Counsel Kenneth Starr can be thoroughly scoured.

But Republicans are confident the 53-year-old judge will be on the bench when the Supreme Court begins its new term Oct. 1.

"Watching this confirmation unfold is like watching the tortured last moments of a blowout basketball game," said Sen. Orrin Hatch, R-Utah. "Democrats are down thirty with ten seconds left, but they keep fouling to stop the shot clock in an attempt to avoid their inevitable defeat."

"Democrats are down thirty with ten seconds left, but they keep fouling to stop the shot clock in an attempt to avoid their inevitable defeat."

An extensive Fox News analysis of Kavanaugh's record on and off the bench — more than a million pages of speeches, memos, and rulings — reveals a solid, predictable conservative record. 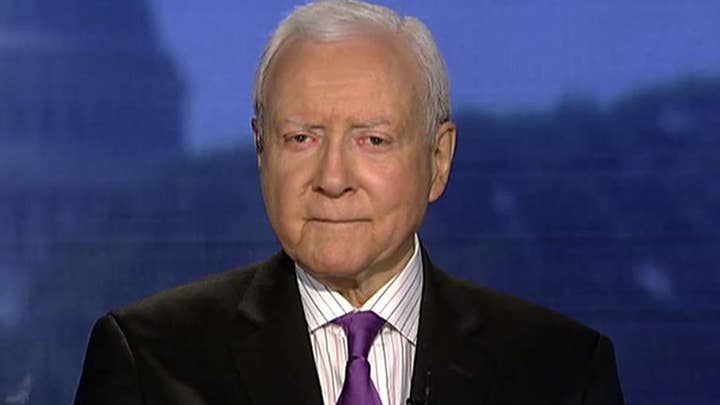 The National Archives, working with the George W. Bush Presidential Library, began releasing tens of thousands of pages of Kavanaugh's past record every few days this month. But officials admit they will not be able to produce all the documentation until late October, weeks after the nominee's Senate hearings, floor vote and potential swearing-in as the 114th justice.

Some Senate progressives had initially declared a boycott -- refusing to meet personally with the nominee before the hearings -- as a protest over access to his papers. But that solidarity collapsed, and Senate Minority Leader Charles Schumer has shifted strategy, warning, "We stand ready to sue the National Archives for Judge Kavanaugh’s full records if necessary."

Republicans say the judge's views are being distorted and his record has earned bipartisan praise.

But it is a long, dense record, including:

"There has been quite an extensive record," said Jennifer Mascott, Kavanaugh's first law clerk hire and now a professor at George Mason University's Antonin Scalia Law School. "But if someone is really looking for what will give us the best sense of how Judge Kavanaugh will rule were he to be confirmed, it would be looking at his opinions.”

Despite clerking for his mentor, Justice Anthony Kennedy, Kavanaugh sees his five years as a White House aide to President George W. Bush from 2001-2006, as the ideal training ground for his judicial job.

Much of that time he was staff secretary, the person who manages the daily paper and policy flow to the president, including documents circulated among senior staff for comment. It is a crucial, if largely thankless, job.

"It was important that I maintain strict neutrality and impartiality in that role, so that the president and his policy staff would have confidence that their concern would be presented to the president fairly," he has said, adding that the experience "helped make me a better student of the administrative process, a better interpreter of statutes."

He was in that role for a range of major events and debates, from Hurricane Katrina to moves to expand Medicare.

Most controversial, at least for Kavanaugh's future endeavors, was the internal debate over the administration’s initial endorsement of "enhanced interrogation" of suspected terrorists held overseas.

"I was not involved and am not involved in the questions about the rules governing detention of combatants," he testified at his 2006 confirmation hearing for his current seat on the D.C.-based U.S. Court of Appeals.

But newly released emails from his White House service include a Nov. 19, 2001 memo, cryptically suggesting he would be "happy to help" prepare then-Attorney General John Ashcroft explain post-9/11 policy allowing secret surveillance of contacts between some terrorist suspects and their defense lawyers, without any court order.

Democrats will want to know the extent of Kavanaugh's involvement in, or understanding of, the administration's evolving anti-terror policies. But his backers note this particular email came before the detention policies at Guantanamo were imposed.

Before his job as staff secretary, Kavanaugh was associate counsel in the Office of the Independent Counsel during the Clinton probe, and Starr told Fox News his protégé served as a trusted adviser.

At the time, the investigation had advanced far beyond its initial look at Arkansas real estate deals. But Kavanaugh recognized that the president, in his view, had broken the law by committing perjury.

An August 1998 email titled "Slack for the President?" was written just two days before Clinton would give grand jury testimony about his relationship with Monica Lewinsky.

"The president has disgraced his Office, the legal system, and the American people by having sex with a 22-year-old intern and turning her life into a shambles," he wrote, accusing the White House of "a sustained propaganda campaign that would make [former president] Nixon blush."

The then 33-year-old lawyer said while he respected the office of the president and tried to be fair, he could offer no defense for Clinton’s public and private behavior, and now "the Congress can decide whether the interests of the Presidency would be best served by having a new President."

Less than a month after that memo, the "Starr report" would form the investigative basis of the GOP-controlled House of Representatives' impeachment of the president, a national drama that ended with the Senate's acquittal.

The episode is likely to be revisited at the confirmation hearings, but the nominee has long defended his then-boss, and the investigation itself.

But a 2008 lecture, which he wrote while a judge, suggested -- as a policy, not legal matter -- sitting presidents should be immune from congressional investigations and prosecution while in office and "should be excused from some of the burdens of ordinary citizenship while serving in office." He added, "A President who is concerned about an ongoing criminal investigation is almost inevitably going to do a worse job as President."

Some Hillary Clinton supporters have privately lamented the irony: a lawyer who helped aggressively investigate her husband two decades ago is now poised to sit on the Supreme Court, a nomination she would have made if the 2016 election had turned out differently.

In an isolated area of the Eisenhower Executive Office Building in the White House complex, Kavanaugh has spent the past few days being put through the rhetorical ringer. For hours on end, he sits alone at a table, peppered with questions about his personal and professional record, all in an effort to see if he will crack under the pressure.

The informal, but intrusive prep sessions are known as "murder boards," for their intensity, designed to simulate what the 53-year-old nominee to the Supreme Court will face this week in his Senate confirmation hearings. Democrats hope any public mistakes can pay political dividends in coming weeks.

"If you’re in the Democrats' position, you have no ammunition except obstruction," said Edward Whelan, president of the conservative Ethics and Public Policy Center. "Maybe they hope they win control of the Senate in November, and are able to keep things from happening until January. From their perspective, obstruction is all upside."

"If you’re in the Democrats' position, you have no ammunition except obstruction. Maybe they hope they win control of the Senate in November, and are able to keep things from happening until January. From their perspective, obstruction is all upside."

Sources say the mock questions have focused equally on his work in the judicial and executive branches.

The stakes are enormous, not only for the nominee but also for the man who selected him from an evolving list of 25 possibles first announced during the presidential campaign. Aides say President Trump hopes a successful confirmation will build momentum for his separate midterm political agenda, and bring a measure of stability and public confidence to what has been a challenging 20 months in office.

In the broader realm, filling the seat left by the retirement of Kennedy would solidify the high court's current, shaky right-leaning majority. Having that fifth reliable conservative vote would help guide the administration as it makes strategic decisions about which high-profile issues to pursue in court -- like immigration, the environment, transgender rights and expanded executive authority.

"It's important Democrats and Republicans not roll over on this pick," said Elizabeth Wydra, president of the left-leaning Constitutional Accountability Center. "The American people want their justices to be an independent check even to the president nominating you, to follow the Constitution, not their own political values."

But liberal advocacy groups have all but abandoned efforts to defeat Kavanaugh through public opinion, with scant paid issue advertising. Many progressives lament Democratic senators have been distracted by other ideological fights as the midterm election approaches, with most of the rhetorical fire aimed at Trump himself.

But the hearings could still be dramatic.

Senate sources say Democrats will focus much of their attention on seeking Kavanaugh's views on presidential power, with the possibility he could decide any challenges to the ongoing special counsel probe of Russian interference in the 2016 election.

"Look, it is not a done deal," said Sen. Elizabeth Warren, D-Mass., vowing to continue opposing Kavanaugh. "Donald Trump has made his nomination. And he picks somebody off a list that has been prescreened, prescreened by not one but two right-wing extremist groups."

Along with his courtesy visits to 65 senators of the Senate who will decide his fate, Kavanaugh has prepared for the spotlight by reviewing his own record, and enduring those closely guarded mock hearings.

The private rehearsals are coordinated by the White House Counsel's Office and include more than a dozen participants -- government lawyers, conservative academics, some of his former law clerks, even four senators. The goal is to anticipate every possible line of questioning and danger zone -- to give measured answers but not reveal too much.

Sources say Kavanaugh has settled in being himself, avoiding unscripted responses that might provide the televised "soundbite" to derail what has so far been a flawless confirmation journey. Administration officials are privately confident he will shine in the hearings.

Supporters point to his smooth handling in the face of withering Democratic opposition when he was nominated for his current seat on the Washington-based federal appeals court.