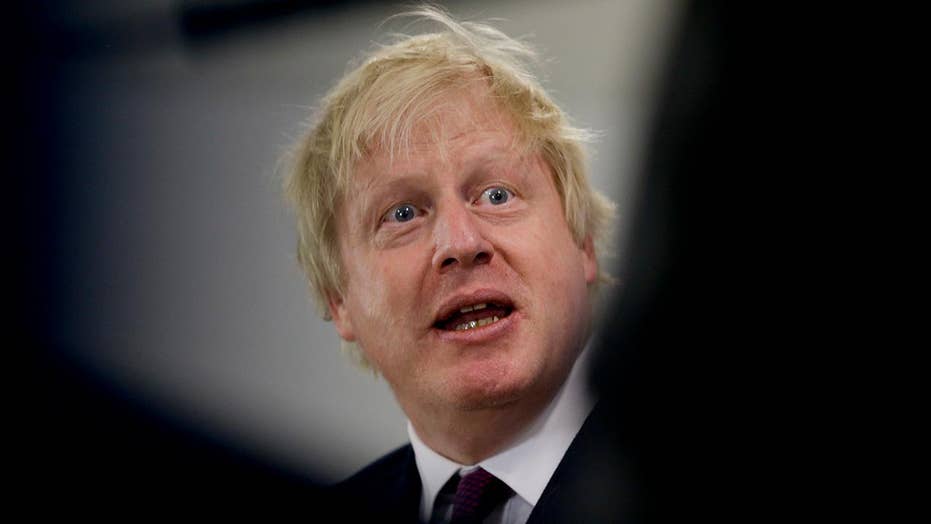 Johnson, who was one of the lead campaigners for “Vote Leave,” resigned less than 24 hours after Brexit Secretary David Davis and junior Brexit minister Steve Baker quit their posts in protest of how the government is handling Brexit.

"This afternoon, the Prime Minister accepted the resignation of Boris Johnson as Foreign Secretary, His replacement will be announced shortly,” said a statement from No. 10 Downing St. “The Prime Minister thanks Boris for his work."

Shortly after Johnson's announcement, May paid tribute to both Johnson and Davis in Parliament for their work in government.

"We do not agree on the best way to deliver our shared commitments to honour the result of the referendum," she added, to laughs and heckles from the opposition benches.

May could face a challenge, as her stance on Brexit talks has come under criticism

Davis had quickly been replaced by MP Dominic Raab, who campaigned for the “Leave” campaign in 2016. But Johnson’s resignation marked a much more critical blow to May’s leadership.

In his resignation letter, Johnson warned Britain was "headed for the status of a colony" with its current outlook on Brexit, and suggested that May was surrendering to the E.U. in negotiations.

"It is as though we are sending our vanguard into battle with the white flags fluttering above them," he wrote.

Those pushing for a so-called “hard Brexit” have been increasingly vocal in their concerns about how May, who supported the campaign to remain in the E.U. in 2016, is approaching negotiations.

At a Cabinet meeting on Friday, May demanded members support a plan for Brexit that it would include Britain partly remaining in the single market and signing up to a "common rulebook" for goods.

"As I said at Cabinet, the 'common rule book' policy hands control of large swathes of our economy to the E.U. and is certainly not returning control of our laws in any real sense," Davis said in his resignation letter.

Johnson’s resignation also comes ahead of a NATO summit in Brussels, and just days away from President Trump’s much-anticipated visit to the country -- where he is scheduled to meet with May on Friday. Johnson has defended Trump's visit in the face of left-wing critics, and had even suggested Trump would be better than May at handling Brexit talks.

But that visit could be complicated as May’s position as prime minister looks increasingly tenuous. Trump has been vocal in his support of Brexit and is more likely to sympathize with Johnson and Davis than he is with May.

Trump's visit already reportedly has government officials on edge, who have reportedly told the White House that he cannot meet with Brexit architect and May critic Nigel Farage while he is in the country.

In response to questions about the working visit in the wake of Johnson's resignation, White House Press Secretary Sarah Sanders confirmed the visit was still on.

“The President continues to look forward to his working visit with the Prime Minister on July 13, and further strengthening the U.S.-U.K. special relationship," she said in a statement.

With the resignation of multiple high-profile pro-Brexit officials, May’s position is seriously weakened, and she is likely to have to scramble to head off a leadership challenge in the coming weeks.

Yet, her position could potentially could be strengthened in the long term if she holds on to her party's support and emerges from the firestorm without Johnson and Davis -- who have been thorns in her side since she entered 10 Downing Street in 2016.

Some "Brexiteers" welcomed Johnson's resignation in the hope that it would be the beginning of the end for May and her plans for a "soft Brexit." Farage praised Johnson for stepping down.

"Now can we please get rid of the appalling @theresa_may and get Brexit back on track," Farage, a Fox News contributor, tweeted.

European Union officials, meanwhile, reacted in delight to the resignations of top Brexit officials, who had been pushing for Britain to take a tougher line in its negotiations with Brussels.

“Politicians come and go but the problems they have created for people remain,” European Council President Donald Tusk tweeted.” I can only regret that the idea of #Brexit has not left with Davis and Johnson. But...who knows?

May faces a tense meeting with Tory parliament members later on Monday as she fights to hang on.

Forty-eight Conservative members of Parliament would be required to launch a challenge to May's leadership of the Conservative Party.