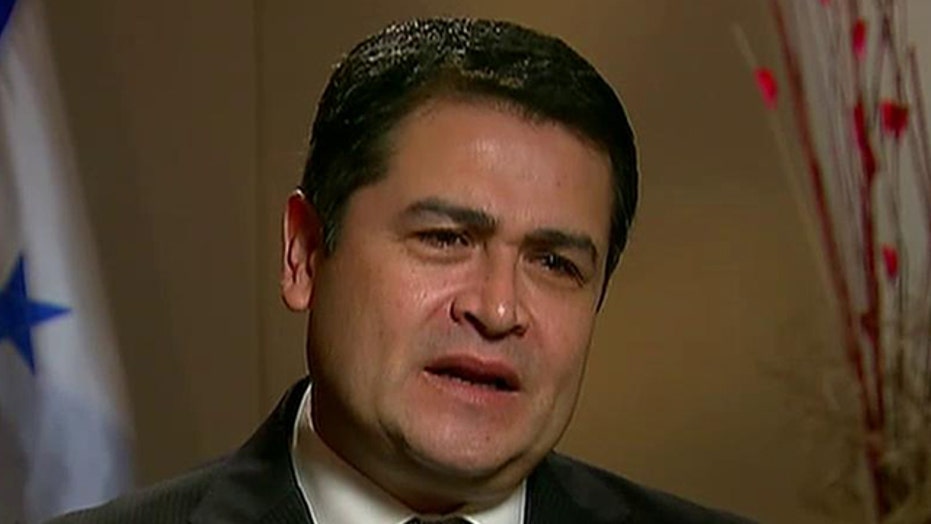 Honduras president's take: Why his country's kids flee to US

Exclusive: Honduran President Juan Orlando Hernandez on why his nation's young children are fleeing to the US, the dangers they face and his meeting with Pres. Obama about the illegal immigration crisis in America

WASHINGTON – The Obama administration is weighing giving refugee status to young people from Honduras as part of a plan to slow the influx of unaccompanied minors arriving at the U.S.-Mexico border, White House officials said Thursday.

The plan would involve screening youths in Honduras, one of the world's most violent nations, to determine whether they qualify for refugee status. Similar in-country screening programs were set up in East Asia after the Vietnam War and in Haiti in the 1990s.

The officials cautioned that no final decision on the matter has been made and said the proposal is among a range of ideas the White House is considering. The officials briefed reporters ahead of President Barack Obama's meeting Friday with Central American leaders on the condition they not be identified by name.

The United Nations has been pushing the U.S. to treat children arriving at the southern border from Honduras, Guatemala and El Salvador as refugees displaced by armed conflict. The trio of nations has become one of the most violent regions in the world in recent years, with swathes of all three countries under the control of drug traffickers and street gangs who rob, rape and extort ordinary citizens with impunity.

Since last fall, the U.S. has seen a dramatic increase in the number of migrants from these three countries arriving at the southern border, particularly children traveling without any adult guardian.

Since Oct. 1, more than 16,000 unaccompanied children from Honduras have been caught crossing the Mexican border illegally. At the same time, more than 30,300 Hondurans traveling as families have also been arrested.

The U.S. has resisted calling the situation a refugee crisis, though Obama and top officials have called it a "humanitarian crisis."

The refugee proposal was floated as Congress looked to be deadlocked on reaching any solution of its own on the border crisis with a five-week recess beginning at the end of next week.

Obama's $3.7 billion emergency spending request looked to be going nowhere amid an impasse over whether to change a 2008 anti-trafficking law to make it easier to return the Central American kids back home. Democrats reject such changes; Republicans insist on them. House Republicans were to meet on the issue Friday morning.

"I think it needs to be resolved. That's why we're continuing to talk to our members about how to resolve it," House Speaker John Boehner said. "But as I said before, the White House needs to get its act together or it's not going to get resolved."

Boehner complained that the White House initially pushed for changes in the 2008 law but, after a backlash from immigration advocacy groups, backed off its support. Advocates say changes to the law would be a violation of the migrant youths' due process.

Sen. Dianne Feinstein, D-Calif., who authored the original provisions in the 2008 law to give additional protections to unaccompanied minors, said the administration now believes it needs more flexibility and has given her legislative language to consider. She said she is still reviewing it and hasn't made any decisions.

Kevin Appleby, director of migration policy for the U.S. Conference of Catholic Bishops, said the refugee proposal would be welcomed by the advocacy community as long as there was no attempt by the administration to pair it to changes to the trafficking law.

"It cannot substitute for providing full asylum rights for kids who have arrived in the United States," he said. "There is no quid pro quo."

It is unclear what would happen to children and families who have already made the dangerous trek to the United States if the refugee plan is implemented. Homeland Security Secretary Jeh Johnson has repeatedly said that there is no free pass for immigrants who come to the United States illegally and that those who are caught crossing the border would be sent home.

The administration would also have to outline what the refugee proposal would mean for Honduran immigrants already in the United States. In 1999, the U.S. government granted Temporary Protective Status to Hondurans living in the country illegally in the wake of Hurricane Mitch. The status has been renewed several times since then, and according to U.S. Citizenship and Immigration Services about 60,000 Honduran living in the United States have received the protective status.

Immigrants from El Salvador received the protection in 2001 and USCIS says about 202,000 Salvadorans remain the U.S. under TPS.

Newly arriving immigrants from countries granted TPS are not eligible for the protection from deportation. TPS is used from time to time by the government to stop deportations to specific countries when authorities deem it is unsafe to return immigrants.

The New York Times first reported that the White House was considering the refugee program for young people in Honduras.