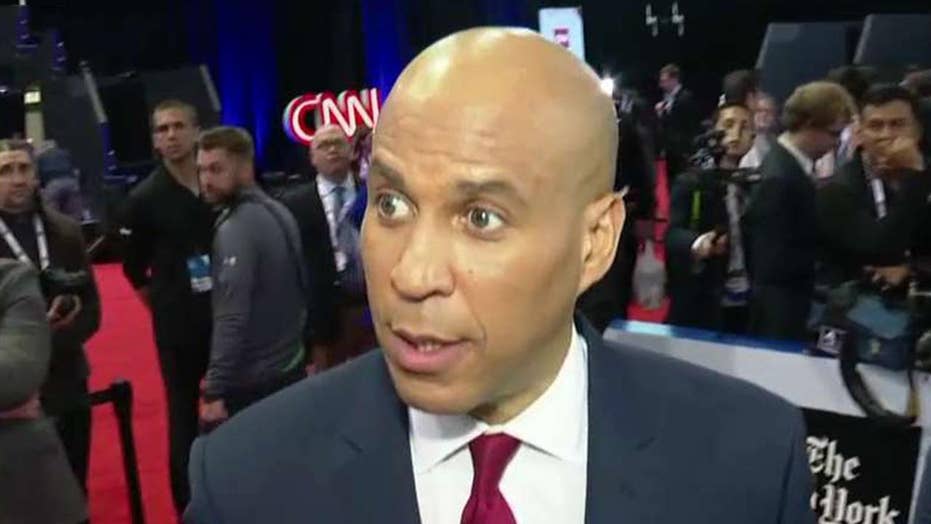 This would be the first primary debate that Booker, who made the stage at the first five debates, won't make. But the senator from New Jersey, in an email to supporters on Thursday morning, still vowed “I’m in this race to win it, and our path forward is clear.”

While he’s reached the fundraising donor threshold for the Dec. 19 showdown, he remains far short of reaching the polling criteria by the end of Thursday's qualifying deadline.

Seven candidates have qualified for the debate, which will be held in Los Angeles. They are former Vice President Joe Biden; Sens. Bernie Sanders of Vermont, Elizabeth Warren of Massachusetts, and Amy Klobuchar of Minnesota; South Bend Mayor Pete Buttigieg; billionaire environmental and progressive advocate Tom Steyer; and tech entrepreneur Andrew Yang. Sen. Kamala Harris of California had qualified for the debate, but she dropped out of the presidential race last week.

Booker emphasized in his email that “I may not be on the debate stage next Thursday, but thanks to the outpouring of support from this community over the past few weeks, we know there’s a path to victory and we no longer need the December debate stage to get there.”

Booker, an energetic and often-affable candidate in the still-large field of Democratic White House hopefuls, has built up campaign staffs in Iowa, New Hampshire, Nevada and South Carolina -- the first four states that hold contests in the primary and caucus presidential nominating calendar. And the senator’s spent plenty of time in those early voting states, connecting directly with voters through retail campaigning.

But Booker’s efforts have failed to resonate in national and early voting state polling, as he hovers in the low single digits.

Booker returns to New Hampshire on Friday, and Demissie said the candidate would spend time in Iowa and Nevada the rest of the month, including kicking off a multi-day bus tour in Iowa next Thursday, hours before the next debate takes place. And he announced that the campaign would be spending a half-million dollars to go up with TV commercials on Iowa airwaves.

Banking on late-deciding voters in the first caucus and first primary state, Demissie said, “I think Iowa voters and New Hampshire voters could deliver a surprise for us.”

“We’re in this thing, and we’ll fight to the last breath," he vowed.