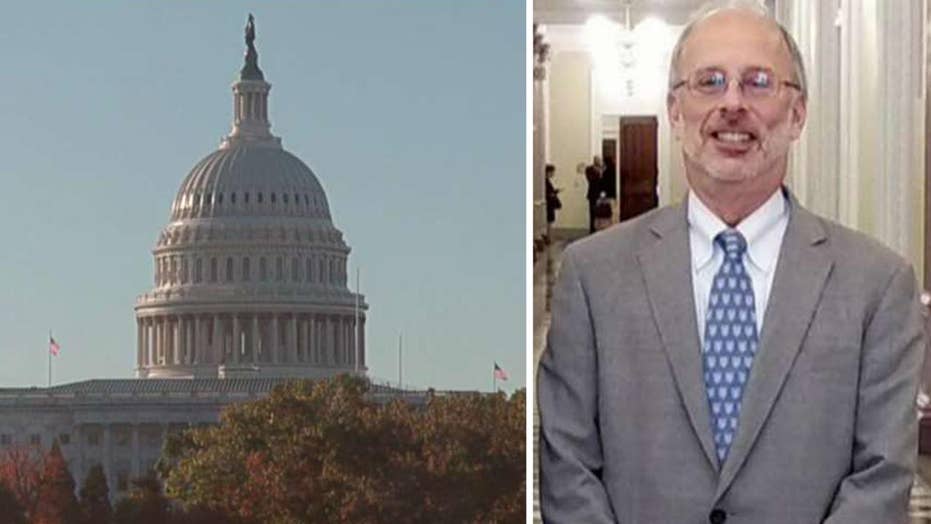 Charles Kupperman, a former deputy to ex-National Security Adviser John Bolton, is looking to the courts to resolve a new standoff in the impeachment inquiry, as Democrats threaten him with contempt for defying a subpoena at the direction of the White House.

The subpoena had ordered Kupperman to appear for a deposition Monday morning. He did not. Kupperman released a statement later Monday, saying: “Given the issue of separation of powers in this matter, it would be reasonable and appropriate to expect that all parties would want judicial clarity.”

In response to a tough letter from House Democratic leaders, Kupperman's attorney Charles Cooper suggested his client is willing to comply with their requests eventually — provided a judge tells him to do so.

"We want to assure your clients, again, that it is not Dr. Kupperman who contests your clients' constitutional claim," Cooper said. "It is President Trump, and every President before him for at least the last half century, who have asserted testimonial immunity for their closest confidential advisors."

He continued: "If your clients' position on the merits of this issue is correct, it will prevail in court, and Dr. Kupperman, I assure you again, will comply with the Court's judgment."

His attorney has claimed Kupperman is facing "irreconcilable commands" by the legislative and executive branches that the courts must resolve.

The Sunday letter came in response to a stern warning issued Saturday from House Intelligence Committee Chairman Rep. Adam Schiff, D-Calif., House Foreign Affairs Committee Chairman Eliot Engel, D-N.Y., and House Oversight Committee acting Chairwoman Carolyn Maloney, D-N.Y. The Democrats claimed that the issue of whether Kupperman should comply with a congressional subpoena or White House instructions “cannot be decided by a court,” and accused the Trump administration of having a hand in the lawsuit as a tactic for impeding the investigation.

After he was subpoenaed, Kupperman filed a lawsuit in federal court on Friday asking a court whether he should accede to House demands for his testimony or to assert "immunity from congressional process" as directed by President Trump.

In the lawsuit, Kupperman said he "cannot satisfy the competing demands of both the legislative and executive branches." Without the court's help, he said, he would have to make the decision himself — one that could "inflict grave constitutional injury" on either Congress or the presidency.

The Democratic leaders claimed that Kupperman's argument was invalid, as well as part of an obstruction effort by the president.

“Dr. Kupperman’s lawsuit – lacking in legal merit and apparently coordinated with the White House – is an obvious and desperate tactic by the President to delay and obstruct the lawful constitutional functions of Congress and conceal evidence about his conduct from the impeachment inquiry,” their letter said.

They also threatened that with no appearance on Monday, “his absence will constitute evidence that may be used against him in a contempt proceeding.” Schiff reiterated this Monday morning after Kupperman failed to show up, claiming this was evidence of the White House trying to hide something.

"If this witness had something to say that would be helpful to the White House, they would want him to come and testify," Schiff said. "They plainly don't."

The committee chairs said that Kupperman’s testimony could corroborate evidence that Trump abused the power of his office by attempting to pressure Ukraine to investigate political opponents, and warned that Kupperman’s “defiance of a congressional subpoena” could “cause the Committees to draw an adverse inference against the President.”

Kupperman is one of several former and current National Security Council officials called by the Democrat-led committees to testify behind closed doors this week, as they attempt to get a better look at what went on in the White House as Trump requested Ukrainian President Volodymyr Zelensky to help with investigations of Democrats' activities during the 2016 election and the business dealings of Hunter Biden, son of former vice president and 2020 Democratic hopeful Joe Biden.

Schiff told ABC's "This Week" that he would like Bolton to testify, calling him "a very important witness," but expected the Trump administration would try to block his appearance as well.

In a surprise appearance, meanwhile, U.S. Ambassador to the E.U. Gordon Sondland showed up on Capitol Hill Monday, apparently to review the transcript of his prior testimony -- amid some questions about possible discrepancies with other accounts.

Republicans have criticized Schiff for conducting interviews and deposition behind closed doors, where GOP lawmakers not on the relevant committees do not have access. Schiff said that public hearings are planned, "and I think we'll be doing them soon."