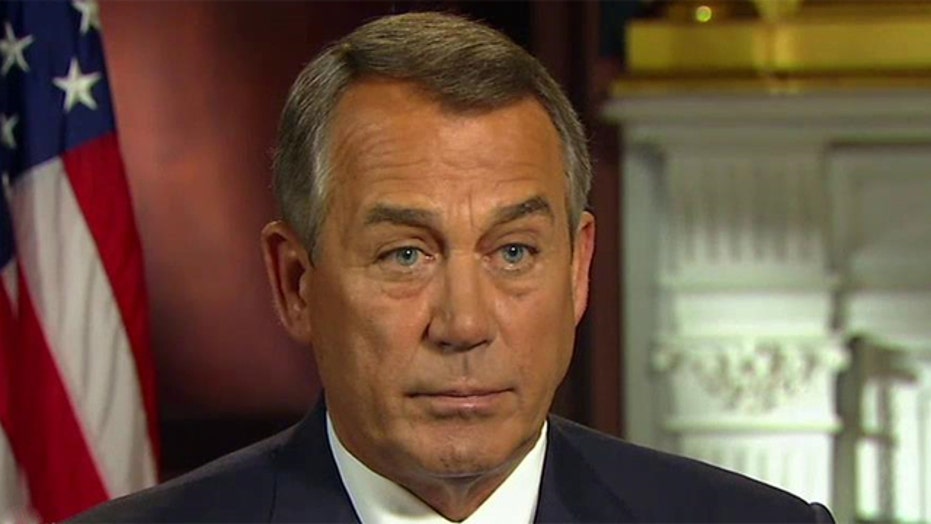 Exclusive interview with the speaker of the House

House Speaker John Boehner is giving little ground to President Obama and his fellow Democrats on Capitol Hill on key issues, blaming Senate Democrats if the Homeland Security Department runs out of money and criticizing the president’s proposal to fight The Islamic State.

Boehner said on “Fox News Sunday,” in an interview taped on Friday, that Senate Democrats are blocking votes on a House-passed bill that funds the agency after Feb. 27 but also rolls back Obama’s executive actions on immigration.

And the House won’t send the Senate a new bill that Senate Democrats would accept, the Ohio Republican said.

“One more time: The House has done its job under the Constitution. It's time for the Senate to do their job,” said Boehner, who has stated his position several times since Senate Majority Leader Mitch McConnell raised a flag Tuesday.

However, he also defended McConnell, R-Ky., saying he has “done a great job” since taking control of the upper chamber in January, in part by offering Democrats numerous opportunities to offer amendments on bills.

The office of House Minority Leader Nancy Pelosi responded to Boehner’s remarks just minutes after the interview was aired.

"With only four legislative days left until the Republican Homeland Security Shutdown, Speaker Boehner made it clear that he has no plan to avoid a government shutdown,” said Pelosi spokesman Drew Hammill. “The speaker's reliance on talking points and finger-pointing was a sad reflection of the fact that the Tea Party continues to hold the gavel as they insist on their futile anti-immigrant grandstanding.”

Boehner also said the request for military force against the Islamic State militant group that Obama recently submitted to Congress is too restrictive and that he doesn’t know whether it will get congressional approval.

“The president is asking for less authority than he has today under previous authorizations,” Boehner told Fox News. “I don't think that's smart.

“We need a robust strategy to take on ISIL. No one has seen one from this White House yet. In addition to a robust strategy, I think we need to have a robust authorization. And I don't believe what the president sent here gives him the flexibility, or the authority, to take on this enemy and to win.”

Boehner said Obama’s request was just the beginning of the authorization process and that the House will have “exhaustive” hearings on the issue and that bipartisan support is needed for passage.

“How that turns out I think it's too early to predict,” he said.