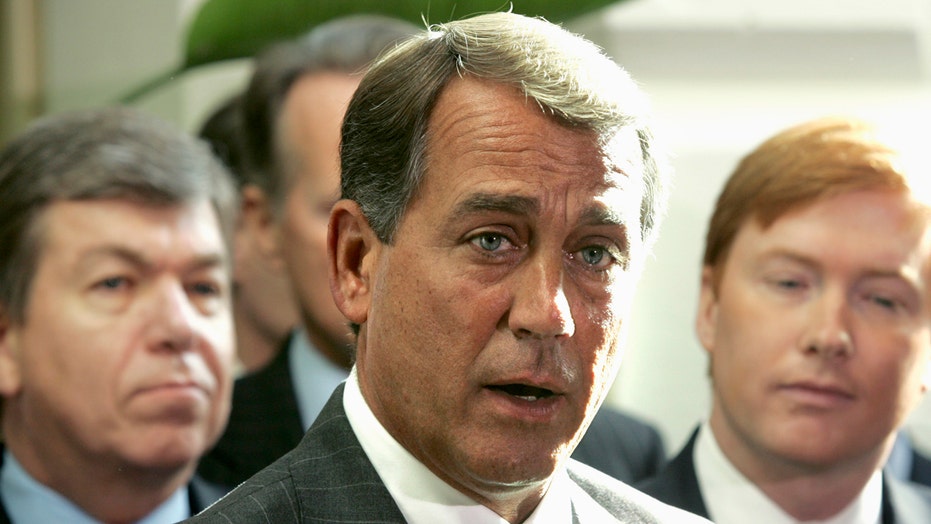 Is Boehner bitter or finally free to speak his mind?

House Speaker John Boehner on Sunday struck a defiant tone after announcing his resignation two days earlier, saying he would have had enough votes to survive a potential recall effort and that House conservatives won’t get a government shutdown.

“Winning that vote was never an issue,” Boehner told CBS’ “Face the Nation.” “I was going to get the overwhelming numbers of [votes]. I would have gotten 400 votes probably.”

Had Boehner submitted to such a vote, he would have needed at least 218 of them from the House’s 435 members.

However, the Ohio lawmaker said he didn’t want fellow House Republicans to “walk a plank” to keep him in charge of the GOP-controlled chamber.

“They're going to get criticized at home by some who think that we ought to be more aggressive,” Boehner said.

The vote to replace Boehner could come as early as this week. House Majority Leader Kevin McCarthy, No. 2 in Boehner's leadership team, reportedly has enough votes to become speaker. However, it's unclear whether the chamber's conservative caucus will field a candidate or even have enough votes to challenge a more moderate candidate or force multiple rounds of balloting.

Boehner also said Sunday “no” to the possibility that the federal government will partially shut down Wednesday because Congress will indeed pass a stop-gap spending bill without funding for Planned Parenthood -- a measure President Obama has vowed to veto.

The effort to defund Planned Parenthood was essentially led by the same small-but-powerful group on conservative House members who were trying to ouster Boehner.

Boehner said Sunday that the GOP-led Senate is expected next week to pass a continuing resolution, or temporary spending measure, and that the House will take up the Senate bill.

Boehner will now almost certainly have enough votes, with support from Democrats, to pass the legislation without fear of retaliation from conservatives.

“I expect my Democrat colleagues want to keep the government open as much as I do,” he said.

Boehner said he will vacate his leadership post and House seat by October 30 and that he plans until then to try to pass “conservative legislation.”

However, he was not specific about such key, looming issues as passing a comprehensive transportation bill and a measure to keep open the government’s Import-Export bank.

“I expect that might have a little more cooperation from some around town to try to get as much finished as possible,” Boehner said. “I don't want to leave my successor a dirty barn. I want to clean the barn up a little bit before the next person gets there.”