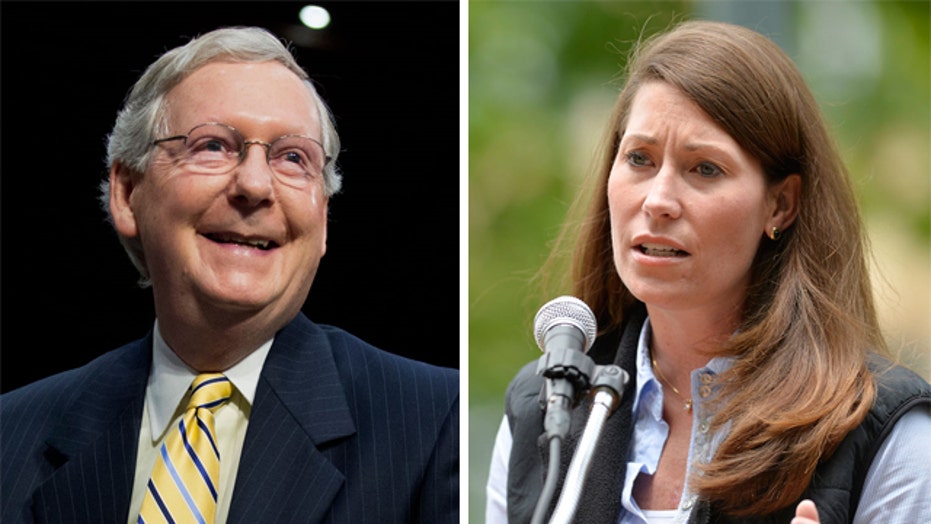 A look inside the Kentucky Senate race

LEXINGTON, Ky. – In a campaign season where Democrats are fighting to hold on to their Senate majority, perhaps no race is as important or symbolic as the brawl shaping up in Kentucky between Senate Republican Leader Mitch McConnell and Democratic rival Alison Lundergan Grimes.

Labor Day is the unofficial kickoff of the midterm campaign season, but Democrats have been working long and hard to knock off McConnell -- and prevent him from becoming majority leader.

By the time Election Day arrives, Kentucky could become the most expensive Senate race ever, surpassing the 2012 Massachusetts contest between Elizabeth Warren and Scott Brown. That race saw a record $82 million spent. In Kentucky, that number, by some estimates, could reach $100 million.

Grimes, the Kentucky secretary of state, is running on a message that McConnell has become a Washington insider who has lost touch with his constituents.

"He promises further gridlock," said Grimes, while attending a Louisville Labor Day union picnic on Monday. "He has gone Washington [and] left the people of Kentucky ... especially Kentuckians -- behind."

McConnell refutes that, and in a speech to the Pulaski County Chamber of Commerce in Somerset on Tuesday, urged the crowd to "change the majority of the Senate and put a Kentuckian in charge."

At first blush, Grimes would appear to have an opening. Despite recent polling showing McConnell with a small and slowly growing lead in the polls over Grimes, Kentucky voters aren't enamored with the five-term senator.

McConnell's approval ratings in the state hover in the low-to-mid-thirties. But it hasn't destroyed his general election poll numbers, in large part because President Obama is just as unpopular.

The Republican Senate leader consistently has fought the president's agenda and told Fox News if he runs the Senate, that won't change.

"We're going to use the power of the purse to challenge [President Obama]," McConnell said. "Now he has a veto, but at least we'll get something on to his desk that makes him uncomfortable. That hasn't happened in six years."

Grimes has distanced herself from Obama from the start, but has been toeing the party line on charging that Republicans' social policy is a war on women.

"I think Mitch McConnell's failed record when it comes to women speaks for itself. Voting against the Violence Against Women Act, Paycheck Fairness Act, Lilly Ledbetter Act," Grimes said. "We don't have a senator who is strong enough to stand up for the women in this state."

However, polls show McConnell and Grimes running almost even among women.

One of the struggles for Grimes has been local media reports on how she has not denounced a now-former state Democratic lawmaker accused of sexual harassment by three former legislative aides.

Another issue concerns her father Jerry, a former two-term chairman of the state's Democratic Party. He owns a restaurant in Lexington called Hugh Jass Burgers. As of Monday, the menu included Abby's Hugh Jass Burger, named after daughter Abigail; Charlotte's Rack, in reference to his wife; and the Tiny Tush burger. However, the restaurant has since updated its website. It changed the names of the first two entrees to The Baby Ray and Rack o-Ribs.

The two Senate candidates have also been hammering each other over recent campaign distractions. Grimes has been hitting McConnell hard on the resignation of his campaign manager, Jesse Benton, who left the campaign after his name surfaced in an investigation of Ron Paul's 2012 presidential campaign in Iowa allegedly paying a politician for support.

McConnell has been airing ads attacking Grimes on her campaign bus leased by a company owned by her father. Reports suggest that the campaign paid less than market rate for leasing the bus, which would be considered an illegal campaign contribution.

Both candidates have routinely dodged the controversies when asked by the press. McConnell just made his first comments on Benton on Tuesday, but only said the campaign was "moving on."

Similarly, Grimes has refused to address specific questions about the bus, only calling the allegations "baseless."