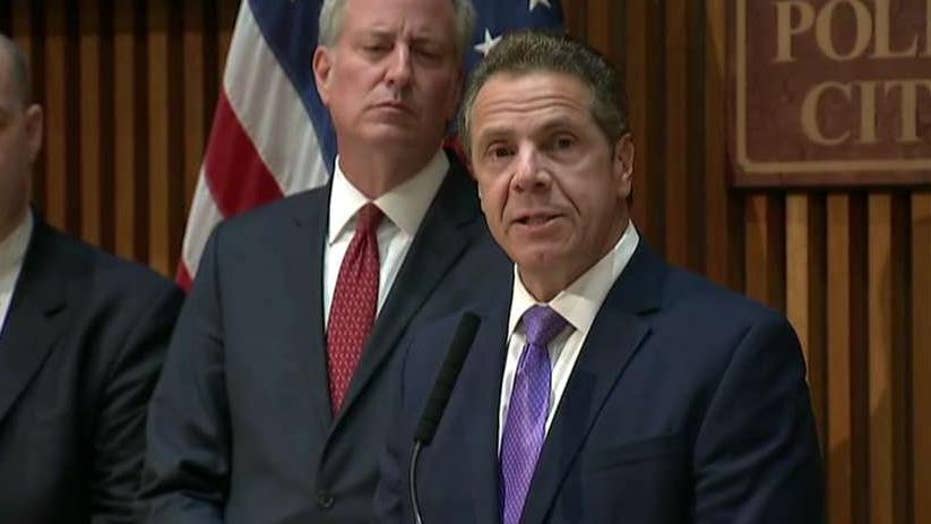 The Fiscal Times’ Liz Peek says the proposed tax hikes by New York Gov. Andrew Cuomo are driving people and eventually businesses away from the financial capital of the world.

The Republican tax plan touted as the signature legislative accomplishment of President Trump’s first year in office already is running into efforts by high-tax blue states to “evade” a key provision meant to help offset the law’s rate cuts.

Whether those plans will work is an open question, as the courts have come down on both sides of the debate.

But as tax season gets underway, state officials are floating two general ideas to blunt the impact of the Tax Cuts and Jobs Act’s $10,000 cap on state and local tax (SALT) deductions.

New York Gov. Andrew Cuomo, a likely 2020 Democratic presidential contender, wants to largely end the personal income tax, instead imposing an employer-side payroll tax that's deductible on federal taxes. This would ease the impact of the SALT cap for employees, though companies would likely adjust wages – which could be offset with a credit.

California state Senate President Pro Tem Kevin de Leon, a 2018 Democratic candidate for U.S. Senate, proposed a separate bill to allow residents to donate to the California Excellence Fund—which would go to the state budget—and in return get a dollar-for-dollar state tax credit on the full amount of the contribution. California taxpayers would then be able to deduct that ‘charitable’ contribution from their federal taxes, making up for any loss from the SALT cap.

'I never thought I would see the day when state governments would be teaching people how to cheat the federal tax system.'

Fresh off his inauguration, New Jersey Gov. Phil Murphy supports a concept similar to the California proposal. Connecticut seems to be warming to the New York plan, while Illinois and Maryland are considering their own variations.

Advocates cite case law in pushing these proposals – but courts have mixed verdicts on whether a tax benefit could count as income or even as a quid pro quo.

Treasury Secretary Steven Mnuchin recently told reporters at the White House: “I hope that the states are more focused on cutting their budgets and giving tax cuts to their people in their states than they are on trying to evade the law.”

Treasury Secretary Steven Mnuchin is concerned about state efforts to get around the tax law. (AP)

With regard to state-run charities, a 2011 IRS memo found that contributions to state-run organizations could be fully deductible, but with some parameters.

“If the benefits expected to be received by a donor are substantial (that is, greater than those incidental benefits that inure to the general public from transfers for charitable purposes), then the transferor has received a quid pro quo,” the memo says.

In criticizing the state-run charity proposal, among the cases a Tax Foundation report cites are two from the U.S. Supreme Court.

The high court held in the 1986 case of United States v. American Bar Endowment, that “a taxpayer must at a minimum demonstrate that he purposely contributed money or property in excess of the value of any benefit he received in return.”

In the 1989 case of Hernandez v. Commission, the Supreme Court said “payments made to such recipients with some expectation of a quid pro quo in terms of goods or services” cannot be deducted.

However, eight law professors penned a legal analysis referring to a 2011 Supreme Court ruling in Arizona Christian School Tuition Organization v. Winn, which held a donation to a state fund is completely voluntary even if the gift generates a 100 percent tax credit for the donor.

The professors argue tax credits are common across many states to encourage contributions to state-run funds for natural resources, private school vouchers and more. So, if the Trump administration’s IRS seeks to crack down on blue states, it would first have to address similar tax credit programs in red states, said Kirk Stark, a law professor at the University of California Los Angeles and one of the co-authors.

How the removal of SALT deductions will affect New York, California

“Keep in mind that if the IRS wanted to litigate this issue, it could do so with existing programs - it wouldn’t have to wait until some new program is enacted in New York, New Jersey, California, etc.,” Stark told Fox News.

But Jared Walczak, senior policy analyst for the Tax Foundation, said the plans being floated now are different.

“There is no question states can credit general charitable contributions,” Walczak told Fox News. “This would be dramatically different. The donation would have to benefit the recipient. Under California’s proposal, the donor would be better off.”

Last week, the New York State Department of Taxation and Finance released a report examining options that included the charitable donations idea. However, the state seems to be leaning toward the employer-side payroll tax.

Gov. Andrew Cuomo is floating a plan to blunt the impact of the tax law's deduction cap. (AP)

“How does any New Yorker lose? Let's say my employer previously paid me $100 and now it cuts my wage to $95,” Daniel Hemel, a law professor at the University of Chicago, who has been advising several states on SALT, told Fox News. “So at the end of the year I get a refundable credit of $5 for a total of $100, which is exactly where I would have been otherwise.”

Hemel also is one of the eight co-authors of the report arguing for the legality of a state-run charitable tax deduction, and said the two plans are not mutually exclusive.

Walczak said the payroll tax proposal is on firmer legal ground than the charity bill, but could still face questions because of the Supreme Court’s 1929 ruling in the case of Old Colony Trust v. Commissioner that determined any amount a third party spends paying someone else’s tax liability would actually be taxable income for the beneficiary.

Hemel argued a more applicable case would be the 1986 Supreme Court case of Randall v. Loftsgaarden, that “clearly addresses—and clearly dismisses—the possibility that the amount of a credit should be includible in income” to be taxed.

“I’m not so sure that Republicans want to see employer-side payroll taxes included in employee gross income,” Hemel also noted. “That would result in an immediate 7.65 percent rise in every employee's gross income on account of FICA.”

There’s an easier and more beneficial way help residents and businesses in many of these states, argues Alfredo Ortiz, CEO of Job Creators Network, a pro-business advocacy group.