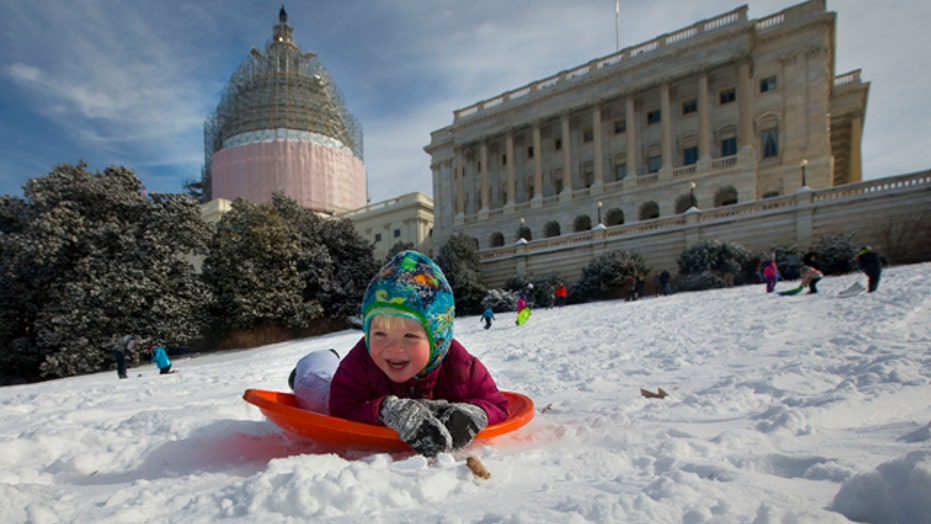 It's rough sledding on Capitol Hill.

Two major storms coated metropolitan Washington in mid-February with close to a foot of snow. The squalls canceled schools and shuttered the federal government. Those are the perfect ingredients to dispatch a blizzard of children and parents to Capitol Hill -- armed with Flexible Flyers, snow tubes and inflatable toboggans. All were determined to turn the 85-foot high knoll -- which Washington planner Pierre L'Enfant described as a "pedestal awaiting a monument" -- into a congressional version of the luge track at Lake Placid.

That was until the U.S. Capitol Police (USCP) showed up. Officers (politely) put the winter merriment on ice, telling the sledders to get off "America's Lawn."

This wasn't just a capricious order by USCP officers. It's in the rules, signed off by members of Congress to harden security around the Capitol following 9/11. USCP regulations feature an entire section outlining "Winter Activities" on the U.S. Capitol grounds. The rules prohibit snowmobiling and most skiing.

"No person shall coast or slide a sled within Capitol Grounds," reads the provision.

There you go kids. A rule right there to melt your day of fun.

During the epic Snowmageddons of 2010, then-Sen. Chris Dodd, D-Conn., helped ice the USCP guideline over President's Day weekend. The exemption permitted sledders to toboggan down Capitol Hill, sealed in two-plus feet of snow.

But the recent February prohibition frosted Washington's non-voting representative in Congress, Del. Eleanor Holmes Norton, D-D.C. The delegate dashed off a letter to Senate Sergeant at Arms Frank Larkin, who chairs the U.S. Capitol Police Board. In her missive, Norton acknowledged that the USCP banned sledding years ago. But she didn't understand "why the U.S. Capitol Police have recently decided to enforce this Scrooge-like ban."

Norton continued: "Left to enforce the ban for no good reason, some U.S. Capitol Police turned away families invoking security. ... I understand that there may be reasonable limits placed on sledding, but an absolute ban on sledding in the little snow the District has on the grounds of the People's House and the Senate is unseemly and unnecessary."

Norton requested a review of the policy and Larkin agreed to evaluate the decrees.

Meteorologists forecast a major snowfall of perhaps 10 inches for Thursday. That formed a political cornice over Capitol Hill Wednesday. It prompted a flurry of back-and-forths between Norton and Larkin. Norton told Larkin her office received calls from families "because they do not want to be turned away once again from sledding on U.S. Capitol Grounds." Knowing deliberations about the rule could work at a glacial pace, Norton proposed an alternative. She asked the sergeant at arms for a one-time sledding waiver through March 8. She declared the locale "one of the best hills in D.C. for sledding."

Norton closed her communiqué with a direct appeal to Larkin.

But in a statement, Larkin rebuffed her, quoting U.S. Code, 2 USC from 1963. "It states 'It shall be the duty of the Capitol police on and after April 29, 1876, to prevent any portion of the Capitol Grounds and terraces from being used as playgrounds or otherwise, so far as may be necessary to protect the public property, turf and grass from destruction or injury,'" said Larkin. He then cited estimates of up to 20,000 sledding injuries each year in the U.S. and said there was a liability issue.

"Unfortunately, the Board cannot grant exceptions to the Traffic Regulations for the United States Capitol Grounds or 2 USC § 1963," Larkin said.

However, Larkin did say the board would continue to review the policy.

Norton got Larkin's drift. But she wasn't happy about it. The delegate responded she was "deeply disappointed" and mentioned a "spontaneous outpouring from residents, and even my colleagues in Congress, in favor of the waiver."

Norton asked the USCP Board to reply to her with their review of the policy by late March. But change may come too late for this season.

"This could be the last snowstorm the D.C. area gets this winter," said Norton.

Some are even calling for slippery civil disobedience, urging a protest "sled-in" Thursday afternoon outside the Capitol.

"Children sledding on the grounds pose no security threat," said Rep. Gerry Connolly, D-Va. He represents suburban Washington residents who may be lured to Capitol Hill for sledding by the deep snowfall. "It's not like you're going to interfere with anything going on here."

For the most part, Connolly is right.

The Capitol is expected to be nearly deserted Thursday. With the threat of a major storm, both the House and Senate slashed their schedules by a day, canceling virtually all activity in the halls of Congress.

The Senate Energy and Natural Resources Committee, chaired by Sen. Lisa Murkowski, R-Alaska, did forge ahead with plans for a hearing "to examine opportunities for the United States in the Arctic." A hearing on the Arctic is appropriate enough, considering the forecast. Committee spokesman Robert Dillon told reporters "yes, it is still on."

Dillon also suggested reporters could have an opportunity to frolic in the snow after the hearing.

"We only hope that [the snow] might stay around long enough so that we can build a snowman tomorrow after work," said Dillon.

And for the record, USCP regulations governing "Winter Activities" are silent when it comes to building snowmen on the Capitol grounds.