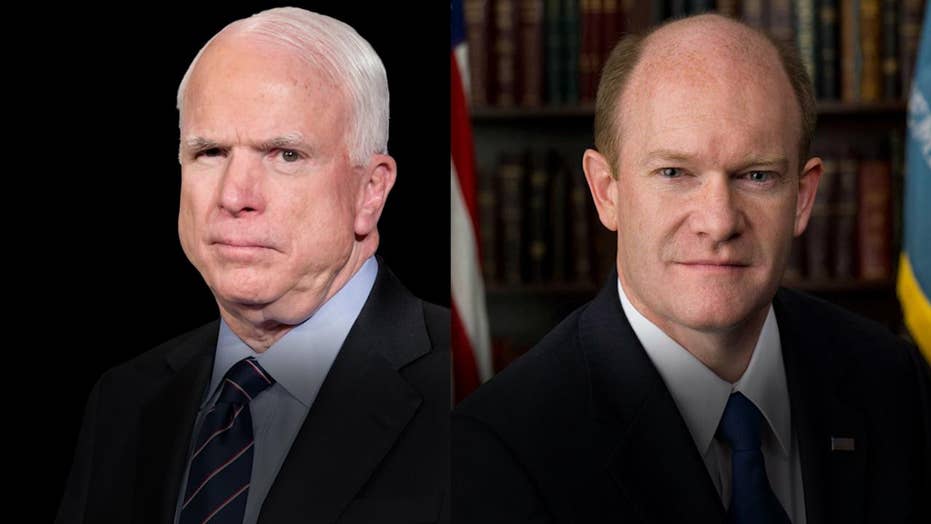 A bipartisan immigration proposal has surfaced in the Senate, only to be quickly knocked down by President Donald Trump via Twitter on Monday.

Republican Sen. John McCain and Democratic Sen. Chris Coons planned to propose legislation Monday that would shield from deportation immigrants who entered the U.S. illegally as children, known as "Dreamers" helped by the Deferred Action for Childhood Arrivals program, or DACA. The bill also would strengthen border security, but it wouldn't provide the $25 billion Trump wants for a U.S.-Mexico border wall.

But before the Senate had a chance to consider the narrow plan, Trump seemed to reject it on Twitter.

What's next move for Democrats on immigration?

"Any deal on DACA that does not include STRONG border security and the desperately needed WALL is a total waste of time. March 5th is rapidly approaching and the Dems seem not to care about DACA. Make a deal!" Trump tweeted.

McCain, R-Ariz., and Coons, D-Del., said in a statement that their bill was designed to focus on two "pressing" border issues -- the "Dreamers" and border security -- so lawmakers could focus on completing a long-overdue budget deal.

The McCain-Coons plan is a more modest approach than Trump has sought for protecting the estimated 1.8 million young immigrants. The measure lacks Trump's demands for limiting the relatives that "Dreamers" can sponsor for citizenship, and ending a visa lottery aimed at admitting more immigrants from diverse places including Africa.

The senators' plan would create a road to legal status for "Dreamers" who arrived in the U.S. by the end of 2013 and meet other criteria, including no convictions for serious crimes. Once they've become lawful permanent residents, they can follow existing procedures to apply for citizenship.

Democrats and some Republicans want to give "Dreamers" a pathway to citizenship, but oppose cuts Trump would make in the number of legal immigrants allowed to enter the U.S. Conservatives oppose letting "Dreamers" become citizens. That stalemate has led many to believe the likeliest outcome is a narrowly focused bill or even no legislation at all.

The senators' proposal is similar to a bipartisan House package by Reps. Will Hurd, R-Texas, and Pete Aguilar, D-Calif.