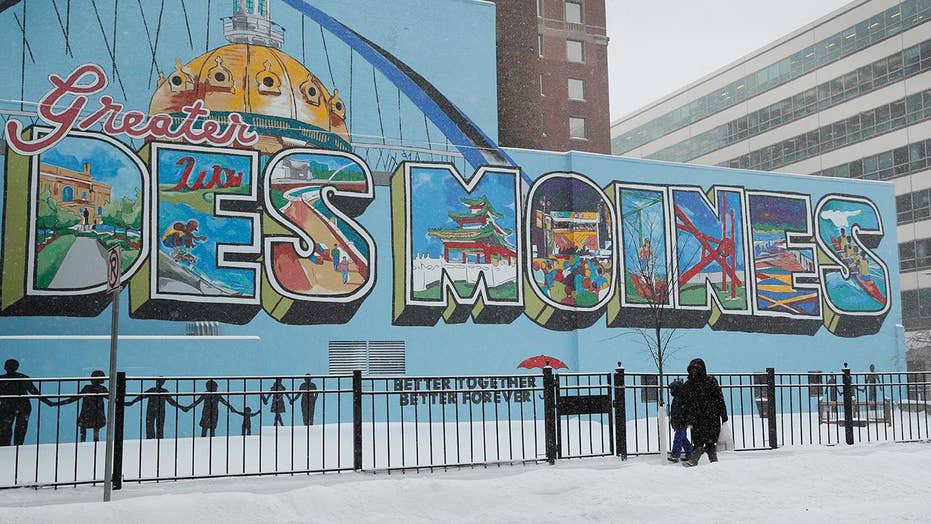 BIG CHANGES, BIG GAMBLE FOR IOWA CAUCUSES
The good news is that the Iowa Democratic Party is introducing all kinds of new practices for their presidential caucuses to address old problems with the system and how results are reported.

The bad news is that they may have introduced new problems — and nobody, not even Iowa Democratic insiders, seems confident that they know how it’s all going to turn out.

Longtime observers know that confusion has been prevalent in both parties since the caucuses became essential a generation ago. We’ve seen contradictory results, multiple candidates claiming victory, shifting delegate counts and allegations of impropriety.

The stakes are high for the Hawkeye State Democrats who run the contest. Not only are they expecting huge turnout for the 41 delegates up for grabs on Feb.3 – even bigger than the nearly quarter-million voter record set in 2008 – but also because the caucuses are in danger of losing their spot at the head of the line.

Iowa has become much less important for Republicans than Democrats. GOP caucus goers haven’t chosen the party’s eventual nominee for an open seat in 20 years. For Democrats, though, the Hawkeye State is crucial. Every Democratic nominee since 1996 has started out with an Iowa win.

But this cycle, Iowa has been under sustained attack from Democratic activists on multiple fronts.

Those primarily focused on racial and ethnic identity have been harshly critical of the fact that about 90 percent of the state’s Democratic electorate is white. Several 2020 candidates, particularly former housing Secretary Julian Castro, expressed their grievances over what they say is an unfair starting place for a party that is less than 60 percent white nationally.

But even candidates who are quite happy with the makeup of Iowa’s Democratic electorate – older, whiter and more reliably liberal than much of the country – still have their complaints.

On caucus night four years ago, Sen. Bernie Sanders came up short by just two tenths of a point against former Secretary of State Hillary Clinton. Or did he? State party officials announced that Clinton had won 700.47 “state delegate equivalents” to Sanders’ 696.92, the thinnest margin in history. But how does one win .47 of a delegate? And what the heck is a “delegate equivalent” anyway?

On caucus night 2016, the party announced the projected distribution of delegates at the state convention, but wouldn’t or couldn’t provide the data on which the projections were based. And that’s when thing got dicey.

Sanders’ supporters alleged that irregularities in individual caucus locations and in the way delegates were awarded may have cost their man the win. Team Bernie also complained that college students, a key constituency for the Vermont socialist, who were away from their home precincts were shut out of the process.

State officials vowed to make the process more inclusive and transparent this time around and are betting their coveted spot as the first in the nation on their ability to deliver.

In the past, caucus goers would turn up at their designated locations and gather with others supporting the same candidate. After officials had counted everyone there, candidates without at least 15 percent of the total voters at the caucus location were deemed not viable.

Voters then had a chance to re-align themselves. For example, if candidates X and Y were both under the line, their supporters could team up and pool their support behind one candidate to stay in the race. Or maybe one side could talk enough supporters of viable candidates into joining their team that their candidate could stay alive.

For the sake of transparency and simplicity, it will be more streamlined this time.

When they arrive at their caucus location, voters will get a card to indicate their presidential preference. If their candidate falls short of the 15 percent threshold on the first count, there’s only one hope: They have 15 minutes to team up with supporters of other candidates below the viability line to unite behind one candidate who can complete. But unlike years past, they can’t woo supporters from the more successful campaigns. Voters who pick a viable candidate can’t switch. They are locked in.

Those who find themselves without a viable candidate have to turn in their cards and either select a new choice from the campaigns that remain or simply declare themselves uncommitted and call it a night.

The goal here is to be able to have a clear accounting of votes and to make the tabulation process faster and more easily understandable. State officials promise for the first time that they will be able to provide raw voter totals from the initial preferences and from the final distribution along with the projected number of delegates to the state convention.

The “first alignment” will show the number of voters initially caucusing for each candidate and the “final alignment” will be the basis on which the delegate estimates will be drawn. Instead of just giving the answer, party officials will be showing their work.

And for the sake of clarity, all three set of numbers – the first, final and delegate estimate – are supposed to be revealed together on a rolling basis as caucuses conclude.

What we don’t know here is quite a lot. How well will caucus goers and local Democratic officials at more than 1,600 locations adapt to the new procedure? Will the campaigns accept the formula for forecasting delegates from raw votes or will we have, yet again, competing claims of victory?

After all, in the event of a very close contest, it’s technically possible that a different candidate will “win” each of the three metrics. That’s part of the reason why the state party itself isn’t going to declare an official winner on Feb. 3, leaving that to the media and campaign spin-meisters to hash out themselves.

The other big change on tap this year is something like the caucus version of absentee voting. As a sop to Sanders and other who complained about ease of access for college students, workers with night jobs and those living abroad, the party has introduced what it calls the “satellite caucus.”

At 71 sites in Iowa voters can gather at places including nursing homes, service centers for non-English speakers or the disabled and factories to participate, in some cases at earlier times of the day. There are 25 places in other states, with a heavy emphasis on college campuses, and three international locations, the Republic of Georgia, Scotland and France.

Registered Iowa votes can participate under roughly the same rules as the folks at the regular caucus locations.

There are questions here, too. Some worry about the reliability of the process without officials on hand while others have expressed confusion about how the results will be counted into the delegate estimates at the end.

Party officials promise a seamless system for the new more accessible, more transparent system. They had better be right for their own sakes. The stakes on Feb. 3 are nearly as high for Iowa Democrats and their privileged place at the start of the process as they are for the candidates themselves.

If the state party can’t satisfy the demands on the process itself it may prove impossible to continue to deflect complaints about the ethnic makeup of the state’s electorate at the same time.