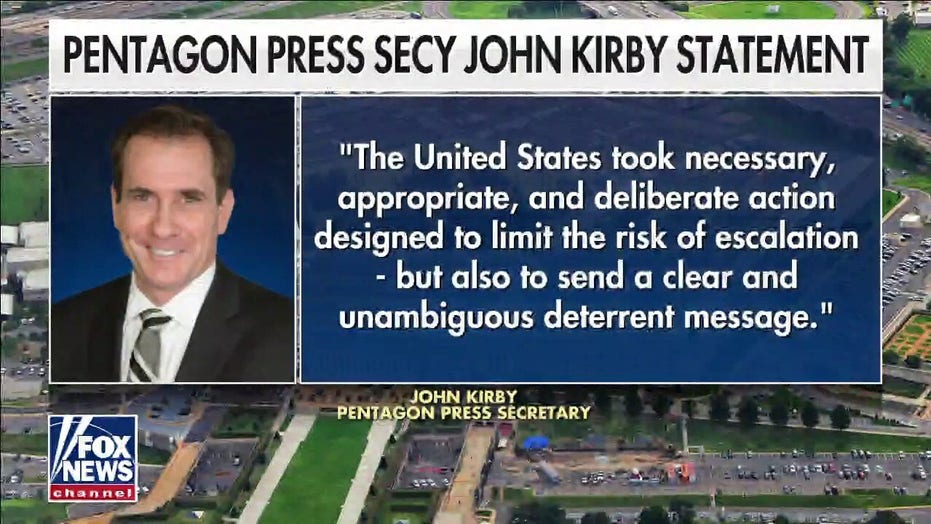 US carries out airstrikes on Iran-backed militia groups in Iraq, Syria

President Biden’s decision to order airstrikes targeting facilities near the Iraq-Syria border that have been used by Iran-backed militia groups was a clear warning to Tehran while the administration continues to negotiate to revive the 2015 nuclear deal.

Lawrence J. Korb, the senior fellow at American Progress Action Fund and a former assistant secretary of defense, said in an interview that the airstrikes – carried out by fighter-bombers – were essentially Biden "serving notice" to Tehran.

"The first time he used military force was about a month after he was inaugurated," Korb told Al Jazeera. "I think it was no accident that he did it then to send that signal to Iran. The fact that he’s doing it now while they are about to undergo the seventh round of talks on the JCPOA [Joint Comprehensive Plan of Action] is him saying: ‘Just because we are there, it doesn’t mean we are going to ignore [these other problems].'"

John Kirby, the Pentagon press secretary, said Sunday that the airstrikes targeted facilities used by Iran-backed militia groups as staging grounds to launch attacks on U.S. troops in Iraq. He called the strikes "necessary, appropriate, and deliberate action designed to limit the risk of escalation."

He said the strikes did send an "unambiguous deterrent message."

The Iraqi government condemned the airstrikes on paramilitary groups’ positions and called them "a blatant and unacceptable violation of Iraqi sovereignty," according to a statement.

A U.S. defense official with knowledge of the strikes told Fox News that U.S. Air Force F-15s and F-16s were used in the operation. The strikes took place at approximately 6 p.m. Eastern Time, or 1 a.m. local time.

House Speaker Nancy Pelosi, D-Calif., said in a statement that the strikes seemed to be a "targeted and proportional response to a serious and specific threat." Reports said these militias were becoming more sophisticated and capable of carrying out large-scale attacks with remote-controlled drones on U.S. troops in Iraq.

The BBC, citing the U.K.-based Syrian Observatory for Human Rights, reported that five militia fighters were killed in the strikes. The Wall Street Journal, citing a news agency in Iraq that supports the Iranian-allied militias, reported that four of those killed were members of paramilitaries. Sana, the Syrian state news agency, reported that a child was also killed and three other people were injured.

Sen. Chris Murphy, D.-Conn., said in a statement late Sunday that he hopes to be briefed on the Biden-approved airstrikes against three facilities that were conducted without the approval of Congress.

Murphy, who also voiced concern about the February strikes in the region, said the president has the ability to defend forces abroad, but his concern is that "the pace of activity directed at U.S forces and the repeated retaliatory strikes against Iranian proxy forces are starting to look like what would qualify as a pattern of hostilities under the War Powers Act."

The airstrikes are the latest operation carried out against Iranian-backed military groups, following Biden's first known military action in February, when an airstrike targeted a compound in Syria operated by Kait’ib Hezbollah and Kait’ib Sayyid al Shuhada.

The Associated Press reported earlier this month that incoming Iranian President Ebrahim Raisi flatly rejected a key Biden goal of expanding on the nuclear deal and is expected to raise Tehran’s demands for sanction relief in return for compliance.

Karim Sadjapour, a senior fellow at the Carnegie Endowment for International Peace who has advised multiple U.S. administrations on Iran, told the AP that he does not "envy the Biden team."

"I think the administration now has a heightened sense of urgency to revise the deal before Raisi and a new hard-line team is inaugurated," he said.

Raisi, Iran's top judge with ultra-conservative views – who has already been sanctioned by the U.S. – will be inaugurated in August.

Fox News' Lucas Y. Tomlinson and the Associated Press contributed to this report