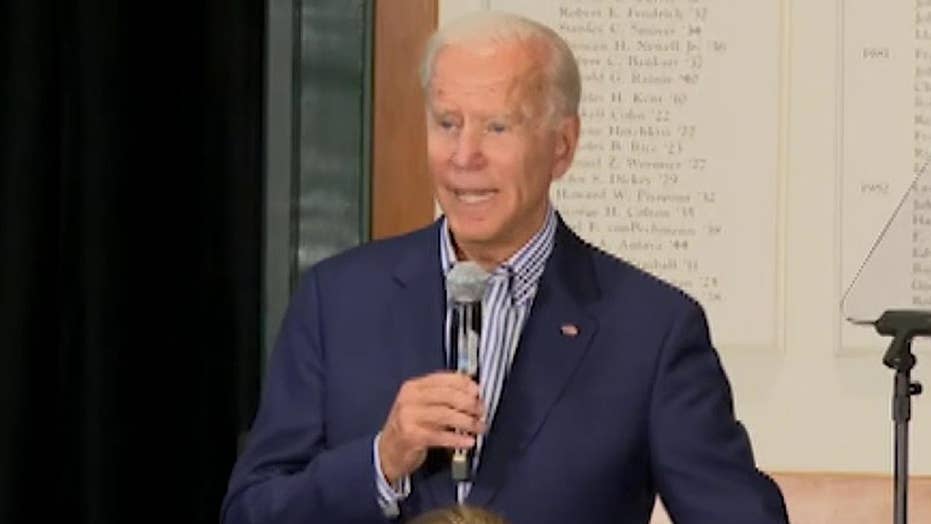 The former vice president asked the audience what would have happened if his former boss had been assassinated.

Toward the end of the town hall at Dartmouth College, Biden - as he often does on the campiagn trail - spotlighted two of his political heroes, Martin Luther King Jr. and Sen. Robert F. Kennedy – who were both murdered five decades ago.

The event was held on the 11th anniversary of Obama choosing then-Sen. Biden of Delaware as his running mate in the 2008 election.

"He was putting into perspective, for young folks in the room, about how traumatic the assassinations of RFK and MLK were for the country," she wrote.

Biden kicked off the event in Hanover criticizing the current president, not his predecessor. He took aim at the Republican president, speaking as President Trump prepared to head off to the G-7 summit of the world’s top economic powers.

“As long as this man is president, and this is no hyperbole, we are in trouble,” Biden said.

Reacting to Trump’s comments during a news conference this week – when he said “I am the chosen one” – Biden imitated the president, saying, “I am the savior.”

The front-runner in the race for the Democratic presidential nomination then said, “If anybody took this administration so far and made a movie about it – it would never happen – do you think anybody would believe it?”

At a later campaign stop in Croydon, N.H., Biden accused the president of continuing “his irrational and self-defeating campaign to make America less respected around the world.”

“We wake up wondering what tweet the president is going to unleash. He’s insulted and denigrated Denmark, a culture that has repeatedly fought side-by-side with us, sacrificing men and women along with our troops including in Afghanistan and he calls the Danish prime minister in a misogynistic way ‘nasty woman.’”

Biden's comments came as he spoke and took questions for over an hour at a town hall focused on health care, a top issue among Democratic presidential primary voters.

He once again highlighted the Affordable Care Act, better known as ObamaCare, the signature domestic achievement during Biden’s eight years in the Obama administration.

"We made significant progress. We have to finish the job,” he argued.

Biden, the only top-tier candidate in the Democratic field who doesn’t support a government-run, single-payer "Medicare-for-all" plan, noted that for him, "building on ObamaCare with a public option is the way to go. We should not walk away.”

“There’s a lot of people running in our party, good people, who want to get rid of ObamaCare, starting over with something new. I’m not for that," he said. "My health care plan sets out in detail how we can protect and build on ObamaCare to make sure every American has affordable, quality, health care options, while at lowest possible health care costs.”

BIDEN JABS AT SANDERS AND WARREN OVER MEDICARE-FOR-ALL

That’s the price tag – at a minimum – that Sanders has acknowledged his "Medicare-for-all" plan would cost. Biden has used the line since last month’s second round of Democratic primary debates.

Pushing his public option, Biden explained, “We’ll build a new public health option like Medicare within the Affordable Care Act. Only everyone will have a chance to buy in if they wish to. If you have plans already working, if you have a generous union-backed insurance plan and you’re giving up wages to get it, you are in fact entitled to keep it as long as it exists.”

Former Vice President Joe Biden makes a point as he speaks with voters after holding a town hall at Dartmouth College in Hanover, N.H., on Aug. 23, 2019.

Earlier in the week, Sanders campaign made a tweak to its "Medicare-for-all" plan to address concerns from unions that under a single-payer system they would be giving up their hard-fought health care benefits and getting nothing in return.

Biden also vowed to take on the pharmaceutical giants over the high costs of prescription drugs, saying “We’re going to throw the book quite frankly at the pharmaceutical companies that have abused the power to make outrageous profits off the backs of Americans.”

Biden’s stop in Hanover, the first in a two-day swing in the first-in-the-nation presidential primary state, comes as his campaign touted their candidate’s standing as the Democratic White House hopeful with the best chance of beating Trump in next year’s general election.

In Biden’s first TV commercial of his 2020 campaign – which started running on Iowa airwaves Tuesday – the announcer in the ad says, “We have to beat Donald Trump and all the polls agree Joe Biden is the strongest Democrat to do the job. No one is more qualified.”

As the announcer speaks, graphics pop up on the screen showing a series of polls where Biden’s beating the Republican president in hypothetical 2020 matchups.

The ad started playing on Iowa a day after another obvious appeal to electability by the Biden campaign.

On Monday the candidate’s wife, Jill Biden, said at a Granite State campaign event in Manchester: “I want you to think about your candidate, his or her electability, and who's going to win this race."

“Your candidate might be better on, I don't know, health care, than Joe is, but you've got to look at who's going to win this election. And maybe you have to swallow a little bit and say, 'OK, I personally like so-and-so better,' but your bottom line has to be that we have to beat Trump,” she stressed.

Democratic voter Karen Summer said as she entered the event on Friday that beating Trump’s “not all that matters but that’s the number one [issue]. Absolutely without a question.”

She added  she came to see Biden to gauge whether he has the fire in his belly to defeat Trump in next year’s election.

“One of the reasons I’m here is I want to see if he actually has any kind of spark or vigor,” she said.

Dartmouth business school student Hailey Durno – who like Summer is undecided on who she’ll support in the primaries – explained that for her "it’s a little bit of both."

"I think you need someone who’s not only going to beat Trump but someone who’s also going to be the right candidate for the job," Durno said. "You don’t want to select someone out of default because you think that they have the potential to win.”