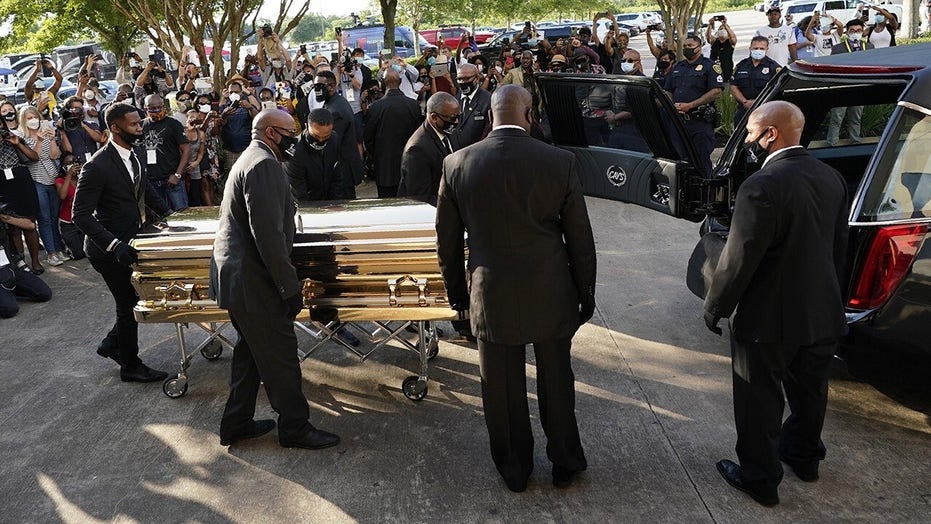 Family and friends gather to attend the private service in Houston before the burial in nearby Pearland; Casey Stegall reports.

Former Vice President Joe Biden directly addressed George Floyd’s 6-year-old daughter, Gianna, in a video message played Tuesday at the funeral of the 46-year old black man who died two weeks ago at the hands of police in Minnesota.

In the recording, the presumptive Democratic presidential nominee recounted the emotional conversation he had on Monday with Gianna as he visited with Floyd’s family in Houston, Texas.

BIDEN MEETS WITH FLOYD'S FAMILY AHEAD OF FUNERAL

“Little Gianna, as I said to you when I saw you yesterday, you are so brave,” said Biden, who is no stranger to severe family loss and tragedy. “Daddy is looking down at you, and he is so proud of you. I know you miss that bear hug that only he could give, the pure joy of riding on his shoulders so you could touch the sky.”

“And I know you have a lot of questions that no child should have to ask, questions that too many black children have had to ask for generations,” Biden continued. “Why? Why is Daddy gone? In looking through your eyes, we should all be asking ourselves why the answer is often too cruel and painful.”

Floyd died after a white Minneapolis police officer put his knee on the handcuffed Floyd’s throat for nearly nine minutes. The now-fired officer – Derek Chauvin – has been charged with second-degree murder.

Floyd’s death and the resulting peaceful protests – as well as violent clashes and rioting in cities across the country – quickly pushed longstanding concerns over police brutality against minorities and the broader issue of the country’s history of systemic racism firmly back into the national spotlight.

While Biden traveled to Texas on Monday to meet with Floyd’s family, he didn’t attend Tuesday’s funeral service, out of concerns his Secret Service protection would disrupt the proceedings.

In the wake of Floyd’s death, Biden has repeatedly spotlighted his push for police reforms and to combat systemic racism. And he made his pitch again in his video message, emphasizing that “now is the time for racial justice. That’s the answer we must give to our children when they ask why. Because when there is justice for George Floyd, we will truly be on our way to racial justice in America.”

“And then, as you said, Gianna, your daddy will have ‘changed the world,’” the former vice president stressed.