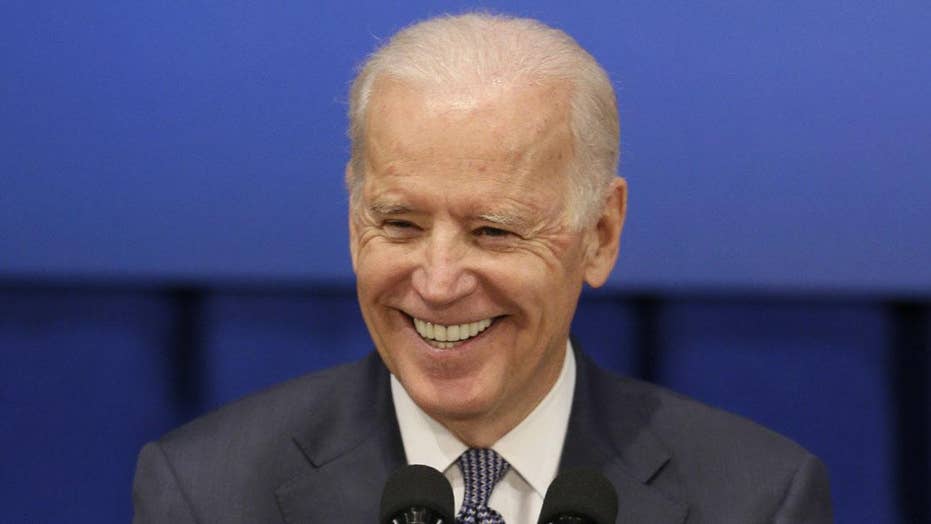 Would Joe Biden be a good person for President Trump to run against in 2020? Democrat youth want someone progressive

Talk radio host Larry Marino weighs in on who the Democrats are most likely to choose for their 2020 presidential nominee.

Former Vice President Joe Biden and Vermont Sen. Bernie Sanders – neither of whom has declared his candidacy for president yet – are the leaders of the pack in the race for the 2020 Democratic nomination, according to the results of a new poll.

A Morning Consult survey released Tuesday of Democrats nationwide and in the first four primary and caucus states also suggests that two declared candidates -- Sens. Kamala Harris of California and Elizabeth Warren of Massachusetts – are third and fourth at this early point in the hunt for the Democratic nomination.

The findings, similar to recent polls from other organizations, indicate that a year out from the start of the primaries, name recognition heavily influences the results.

Morning Consult interviewed 11,627 registered voters who indicated they may vote in the Democratic primary or caucus in their state. The firm said it will release updated results each week going forward.

According to the results, Biden is at 29 percent among Democrats nationwide. The former vice president is seriously considering running in 2020. So is Sanders, who stands at 22 percent in the survey. The independent senator from Vermont battled eventual nominee Hillary Clinton throughout the 2016 primaries.

Harris polls at 13 percent, with Warren at 8 percent. Former Rep. Beto O’Rourke of Texas – who’s considering a White House run – stands at 7 percent, with declared candidates Sen. Cory Booker of New Jersey at 5 percent and Sen. Amy Klobuchar of Minnesota at 3 percent. None of the 12 other candidates or potential contenders listed in the survey topped 2 percent.

It was a similar story among Democratic voters in Iowa, New Hampshire, Nevada, and South Carolina. Biden stood at 33 percent, with Sanders at 21 percent, Harris at 11 percent and Warren a percentage point behind.

Six percent of Democrats in the four early primary and caucus states said they favored Booker, with O’Rourke at 5 percent. None of the other contenders topped 2 percent.

The Morning Consult poll was conducted Feb 4-10. The survey’s overall sampling error was +/- 1 percent, with a margin of error of +/- 4 percent for results in the four early voting states.