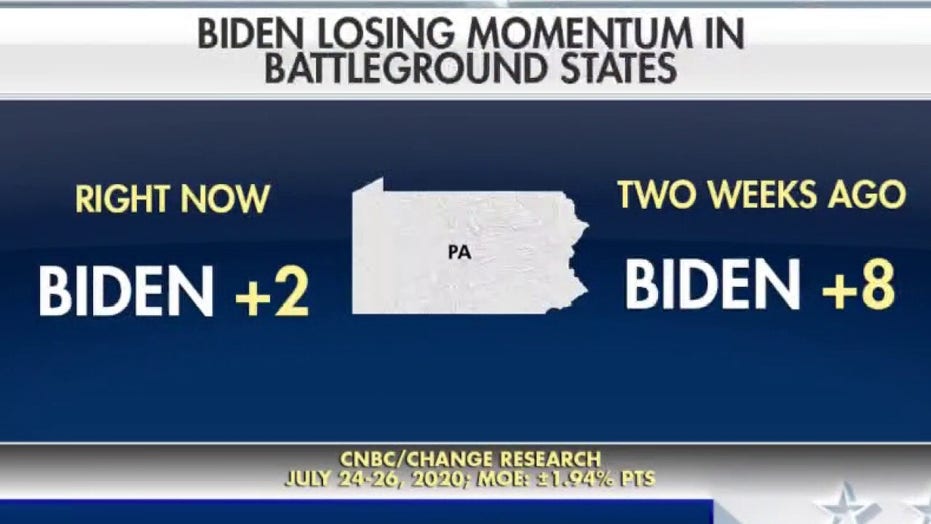 New polling in battleground states shows the presidential race has tightened considerably over the past 2 weeks; analysis from Tom Bevan, co-founder and president of Real Clear Politics, and John McLaughlin, Trump 2020 campaign pollster.

Joe Biden is preemptively doubting whether a coronavirus vaccine will be "real," and has cast doubt on whether the vaccine would be distributed with "any degree of equity and realization" -- seemingly contradicting public health experts even as the White House touts vaccine progress.

The Trump campaign has called out Biden's remarks as "irresponsible," pointing to statements by top National Institutes of Health (NIH) officials promising an effective vaccine.

“How are you going to distribute the vaccine when it arrives, when it arrives, when it’s there?" Biden asked Tuesday. "And the question of whether it’s real, when it’s there, that requires enormous transparency. You got to make all of it available to other experts across the nation, so they can look and see. So there’s consensus, this is a safe vaccine.

"Because already you have, what percent is American people saying if the vaccine were there tomorrow, they wouldn’t take it? And it’s not the usual anti-vaccine crowd. It’s beyond that because people are losing faith in what the president says. Think about it."

Meanwhile, the chief adviser of Operation Warp Speed, the government's vaccine program, said this week in an interview with CNN that he expects efficacy rates "in the 90 percent" range.

"I think it will be a very effective vaccine. That's my prediction," the scientist, Moncef Slaoui, told reporters. "My personal opinion based on my experience and the biology of this virus, I think this vaccine is going to be highly efficacious."

Slaoui predicted that "ideally" all Americans would have access to the vaccine by mid-2021.

Biden's rhetoric comes as his campaign has been stepping up his attacks on the Trump administration's coronavirus testing management. The former vice president has said that the coronavirus crisis in Arizona, for example, is the "direct result of Donald Trump's failure to lead and his desire to 'slow the testing down,' and Americans are suffering the consequences."

Biden specifically called for the White House to "immediately resume operating federally managed community-based testing around the country and establish multiple sites in Arizona." And, in recent weeks, Biden has demanded that Trump "speed up the testing" nationwide, saying Trump has been "putting politics ahead of the safety and economic well-being of the American people."