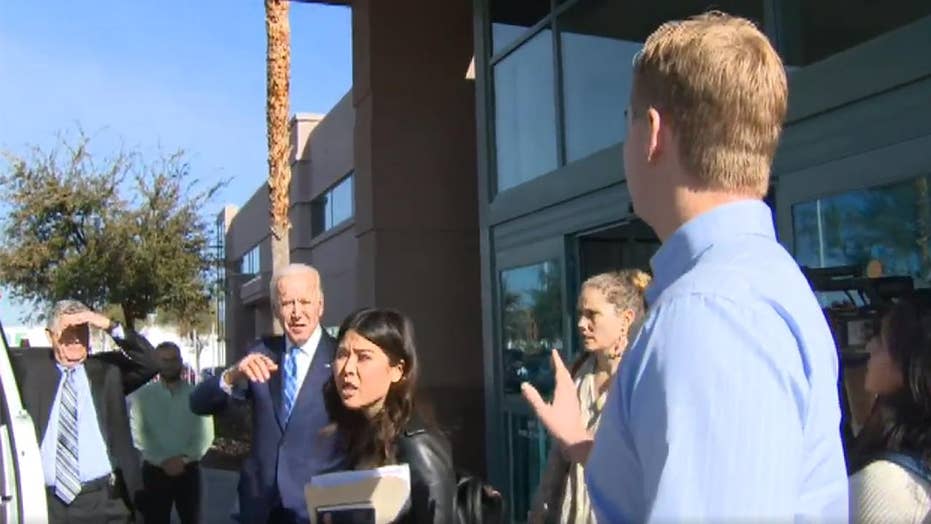 Biden on rumors of single-term pledge: I don't have any plans on one-term, I'm not even there yet

Raw video: Peter Doocy asks former Vice President Joe Biden about rumors he signaled to aides he would only serve a single term if elected president.

Joe Biden is shooting down a report claiming he signaled to top aides that he would only serve one term as president if he wins the 2020 election.

“No, I never have. I don’t have any plans on one-term. I’m not even there yet,” the top-tier Democratic presidential candidate told Fox News during a campaign stop Wednesday in Las Vegas.

The report -- published hours earlier by Politico -- suggested that the former vice president’s top advisers and prominent Democrats outside of Biden’s campaign “have recently revived a long-running debate whether Biden should publicly pledge to serve only one term, with Biden himself signaling to aides that he would serve only a single term.”

Biden, who turned 77 last month, is the second oldest candidate in the 2020 presidential campaign, after 78-year old Sen. Bernie Sanders of Vermont.

“Lots of chatter out there on this so just want to be crystal clear: this is not a conversation our campaign is having and not something VP Biden is thinking about,” Bedingfield wrote, as she dismissed the report.

Sen. Chris Coons of Delaware, a top Biden friend and 2020 surrogate, told Fox News that the former vice president “made it clear to me that he is ready and able and willing to serve two terms if necessary.”

The Politico report included interviews with four people who said they talk to Biden on a regular basis. They indicated that “it is virtually inconceivable” that Biden would run for reelection in 2024 as the nation’s first octogenarian running the White House.

There’s long been talk that Biden -- the front-runner for the nomination in national polling and one of the top-tier of four candidates in the latest surveys in the first two voting states of Iowa and New Hampshire -- could possibly signal that he could serve a single four-year term as president, setting up a younger running mate as his successor in 2024.

But there’s been pushback against such a strategy, amid fears that pledging to serve a single term could turn Biden into an instant lame duck if he won the 2020 election and drain him of any clout or capital as he started his tenure in the White House.