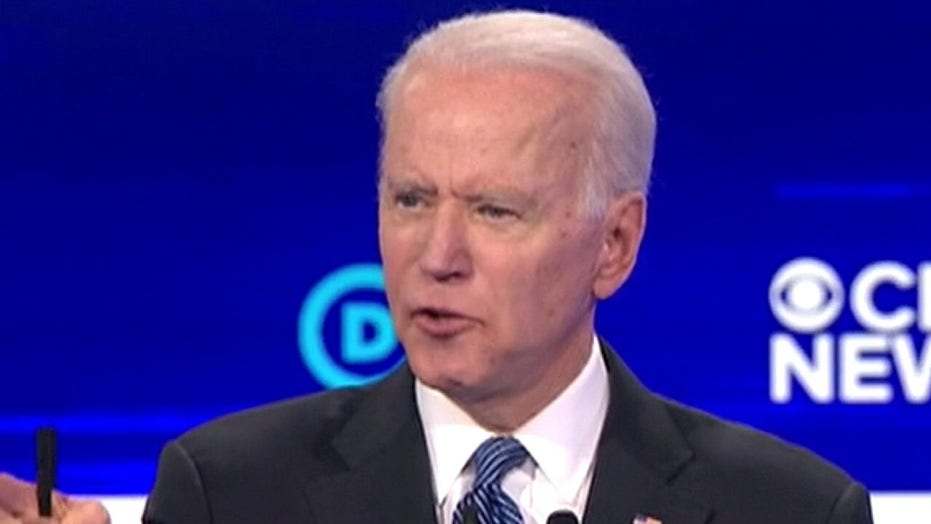 Former Vice President Joe Biden, who has misspoken on a variety of subjects on the campaign trail, blamed President Trump in an interview for pushing a policy that would fingerprint food stamp recipients in order to prevent fraud -- except Trump has never pursued that policy, which is a favorite of billionaire Democratic presidential candidate Mike Bloomberg.

Biden's statement came on Feb. 20 in an interview with the National Newspaper Publishers Association, an organization for black community newspapers. The former vice president's verbal misstep was first reported on by the Washington Post.

"First of all, what we're doing is immoral," Biden said when asked how he would work to eliminate poverty in the U.S. "I know that's not a phrase they often use in politics, but it's immoral. Look what he's doing right — look what this president's doing right now. Look what people have done before. They're going to fingerprint food stamp recipients, they're cutting a billion dollars out of the — all the social safety net, this outfit, whether it's Medicare, Medicaid, whether — across the board."

Trump's proposed budget, which is largely a symbolic document meant to express the president's priorities rather than actually be passed -- especially with Democratic control of the House of Representatives -- would cut spending on entitlements. On food stamps specifically, the president would increase work requirements and tighten eligibility for the program, while cutting spending overall.

But neither Trump's budget nor any other plan out of his White House would force food stamp recipients to submit to fingerprinting in order to get their benefits.

When asked about the apparent falsehood by The Washington Post, Biden's campaign clarified that this particular line of attack was meant for Bloomberg, saying the candidate mixed up the pair of "Republican billionaires."

"Vice President Biden believes that the ultimate test of who we are is how we treat the least fortunate among us, and he thinks it’s outrageous that the Trump administration has been attempting to make it harder for Americans who have fallen on hard times to ensure they can eat," Biden representative Andrew Bates told the Washington Post. "Mayor Bloomberg’s attempt to require families who needed that kind of assistance to submit to fingerprinting fell very much in the same vein as these Trump policies. Sometimes Republican billionaires make it easy to mix up their records."

Bloomberg supported the food stamp fingerprinting policy as mayor, however, which his office said was successful in detecting fraudulent applications and ensuring only the neediest were accessing the program. When asked by the Washington Post about the program, Bloomberg's presidential campaign said the former mayor still supports the idea.

"Mayor Bloomberg consistently said he thought fingerprinting made sense as a way to make sure people only signed up once, and he gave many examples of the different uses for fingerprinting, including that all city employees were fingerprinted," Bloomberg spokesperson Julie Wood told the Post.

In 2012, when New York Gov. Andrew Cuomo was pressuring then-Mayor Bloomberg to end the fingerprinting program, Bloomberg pushed back.

"There’s just no reason that I know of why you shouldn’t do [fingerprinting on] food stamps as a prophylactic measure to ensure the public that the only people who are getting benefits that the public are paying for are those that deserve it," he said, according to New York Magazine.

Though Bloomberg has repeatedly defended the effectiveness of fingerprinting people applying for food stamps, the policy has been criticized for adding stigma to accepting the entitlement and ultimately discouraging some people who may qualify for assistance from taking advantage of the program.

Bloomberg's time as New York City mayor has been closely scrutinized, with fellow Democrats attacking him for expanding the city's "stop-and-frisk" program and comments about the program that were seen as racist. He has also taken incoming from other candidates about his past comments to and about women, with Sen. Elizabeth Warren, D-Mass., repeatedly challenging him to release women with whom he has signed sexual harassment-related nondisclosure agreements from those NDAs.