Vice President Biden is stepping up his argument that rapes and murders could increase if Congress does not pass President Obama’s $447 billion jobs bill – evoking sexual and violent imagery in his sales pitch for the second time in a week.

“I wish these guys who thought it was temporary, I wish they had some notion what it’s like be on the other side of a gun or a 200-pound man standing over you telling you to submit,” he added. “Folks, it matters. It matters.”

Last Wednesday, Biden suggested during a speech in Flint, Mich., that rapes and murders could rise if the jobs bill failed to pass Congress.

The Republican National Committee released a memo calling Biden’s comments “irresponsible and mean-spirited” and calling on the media and women’s groups to condemn the remarks.

“No victim of violent crime would ever wish that others were forced to experience the same trauma they went through – especially to make a brazen political point. So why would the sitting vice president of the United States?”

“Our economy is hurting and the Obama administration’s policies have only prolonged the pain, but that is no excuse for Vice President Biden to wish his political opponents to be subjected to rape or have a gun held to their head,” the RNC said. “Victims of violent crime should never be used for political gain.”

Biden’s comments came after the Democratic-controlled Senate defeated the bill last Tuesday. The White House is pushing Congress to pass the bill piece-by-piece.

The first piece is a $35 billion bill that Senate Democrats proposed on Monday that would provide $30 billion in aid for state and local governments to help keep about 400,000 teachers on the job and another $5 billion to help cities retain about 18,000 police officers and 7,000 firefighters.

But Senate Republicans are expected to block that bill too. They are pushing their own bill that includes tax reform, a balanced budget amendment, a repeal of the federal health care law and lifting prohibitions on offshore drilling – provisions that most Democrats don’t support.

Obama went to rural Virginia on Wednesday as part of his tour pitching the bill and trashing the GOP plan for creating jobs.

Since he addressed a joint session of Congress to announce his jobs plan last month, Obama has given remarks supporting the bill every two days, visiting a new state to pitch it every six days.

Senate Majority Leader Harry Reid accused Republicans of putting their political interests ahead of the country’s.

“Republicans’ No. 1 priority is to defeat President Obama, and their strategy is to keep the economy weak as long as possible,” he said. “So they oppose legislation we know beyond a shadow of a doubt will support 400,000 American jobs without adding a penny to the deficit.”

“It’s completely preposterous at a time when 14 million Americans are looking for a job in this country for the president to be riding around on a bus saying we should raise taxes – on the very folks who create jobs,” he said on the Senate floor.

“Let’s drop the talking points about millionaires and billionaires,” he said. “And let’s work together on bipartisan jobs legislation that’s designed to pass, not fail.” 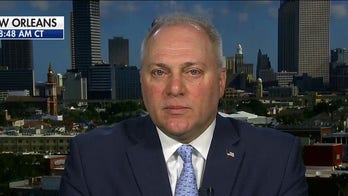