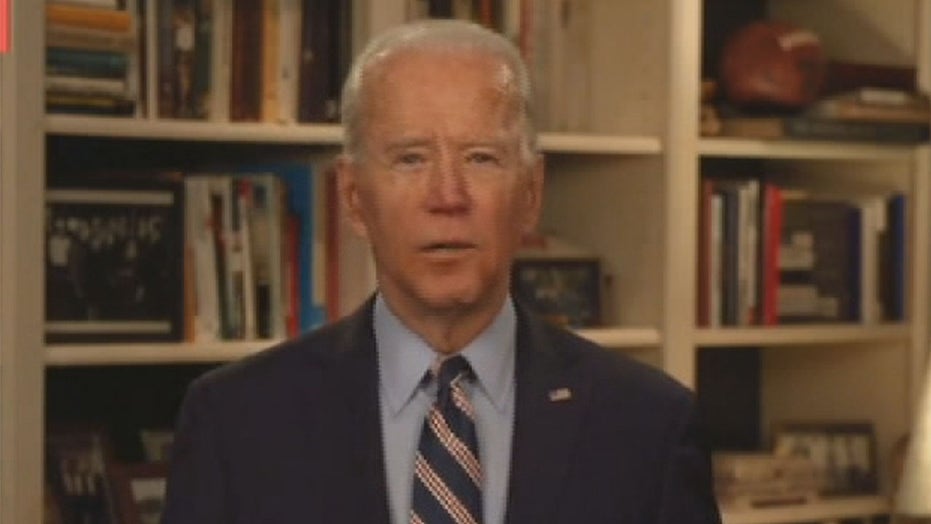 As the race for the White House transitions from a primary battle between former Vice President Joe Biden and Sen. Bernie Sanders, I-Vt., to a likely general election showdown between Biden and President Trump, two new national polls show the former vice president holding the early edge over the GOP incumbent.

But in a potentially troubling sign for Biden, one of the two surveys points to a large enthusiasm gap that favors Trump.

THE LATEST FOX NEWS POLL ON THE 2020 PRESIDENTIAL CAMPAIGN

In another stat that speaks to a lingering divide in the party, 15 percent of Democrats and Democrat-leaning independents who back Vermont Sen. Sanders even say they'd support Trump over Biden in the general election.

Overall, Biden holds a slight 49-47 percent edge over the president among registered voters. But the 2-point advantage is well within the margin of error of the survey, which was conducted March 22-25

The former vice president’s lead over Trump is larger in a Fox News national poll that was conducted  March 21-24. Biden tops Trump 49-40 percent.

Biden’s 9-point lead over Trump is basically unchanged from a Fox News poll in February. Starting with his landslide victory on Feb. 29 in the South Carolina primary, Biden crushed the competition in one primary after another, opening up a large convention delegate lead over Sanders — the former vice president’s last remaining rival for the Democratic nomination. Biden has emerged as the all-but-certain nominee as former rivals and much of the party has coalesced behind him, even with Sanders still in the race.

“Since our last poll, Biden has won enough delegates to make him the presumptive Democratic nominee, but the horse race has not budged. This might be a bad sign for Biden since he has received extensive and largely positive news coverage over the last month,” said Democratic pollster Chris Anderson, whose firm conducts the Fox News poll with Republican Daron Shaw.

But over the past month, the coronavirus pandemic has turned the country upside down, forcing Americans to huddle in their homes to prevent the spread of the deadly virus. Trump has seen his approval ratings jump as he leads the federal response to the pandemic, but the rise has been smaller than past presidents have seen when dealing with a major crisis.

“There appears to be a modest rallying to the flag effect in response to the pandemic that is rewriting our political and social landscape in still unknown ways,” Anderson added.

While Trump has been the center of attention – both positive and negative – as he holds daily White House briefings on the crisis that are carried live on all the major cable news networks, Biden has struggled to increase his media footprint that was instantly erased as the coronavirus outbreak wiped the White House race from the headlines and froze the Democratic nomination battle in place. Without any formal current post in government, Biden has no direct role in combating the crisis and has been overshadowed both by Trump’s daily briefings as well as New York Gov. Andrew Cuomo’s media rise the past two weeks.

As part of his efforts to increase his media profile, Biden on Monday launched a podcast in which he holds conversations with top experts dealing with the pandemic.

“Hey, Team Biden. It’s Joe, and I’m sitting in Wilmington, Delaware,” Biden said as he debuted his podcast. “It’s a scary time, people are confused, things are changing every day, every hour so I wanted to have this conversation with you now if we could.”

The Fox News poll indicates Biden with an 8-point advantage over the president in the key battleground states that will ultimately decide which candidate wins the general election in November. Trump’s edging of Hillary Clinton in a bunch of the battleground states vaulted him into the White House in the 2016 election even though he lost the overall national popular vote to the Democratic nominee by nearly 3 million votes.

Biden’s advantage over Trump grows to 25 points – 57-32 percent – in counties where Clinton and Trump were within 10 points of each other in 2016.

As he turns his attention to Trump and the general election, Biden still needs to clinch the Democratic nomination. But that task has become more difficult, as the coronavirus outbreak has delayed the presidential nomination calendar, with most states holding upcoming contests postponing them until late May or June.

And as Biden tries to unite the party and win the backing of Sanders and his legions of younger and progressive supporters, the populist senator from Vermont who’s making his second straight White House bid appears in no rush to end his White House bid.