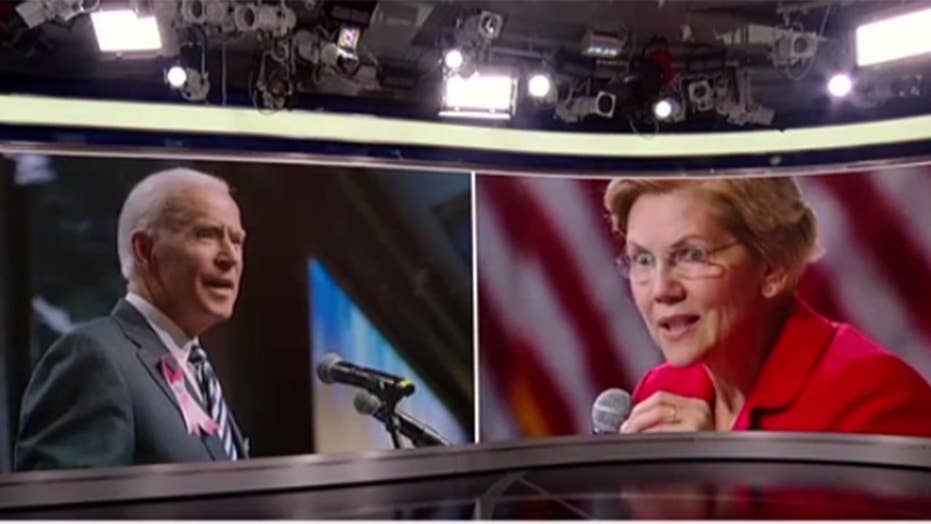 Warren in big trouble? Biden and Buttigieg are doing damage

MANCHESTER, N.H. – A new poll in the state that holds the first primary in the White House race indicates former Vice President Joe Biden with a slight edge over his main rival Democrats seeking the presidential nomination.

The survey – from Quinnipiac University – also suggested that South Bend, Ind., Mayor Pete Buttigieg has joined Biden and Sens. Elizabeth Warren and Bernie Sanders in the top tier of contenders in New Hampshire.

According to the poll – which was released Monday – Biden stood at 20 percent support among likely Democratic primary voters in the Granite State.

THE LATEST FROM FOX NEWS ON THE 2020 PRESIDENITAL CAMPAIGN

Warren, who hailed from neighboring Massachusetts, had the backing of 16 percent, with Buttigieg at 15 percent. Sanders – who’s long lived in neighboring Vermont and who crushed eventual nominee Hillary Clinton in New Hampshire’s 2016 presidential primary – registered at 14 percent.

The survey showed Rep. Tulsi Gabbard of Hawaii at 6 percent, tech entrepreneur Andrew Yang at 4 percent and Sen. Amy Klobuchar of Minnesota and billionaire businessman and environmental and progressive advocate Tom Steyer each at 3 percent. No other candidate in the large field of Democrats seeking to unseat President Trump topped 1 percent.

The Quinnipiac poll differed from a University of New Hampshire survey for CNN that was conducted in late October. Sanders topped that poll, at 21 percent, with Warren at 18 percent, Biden at 15 percent and Buttigieg at 10 percent.

Granite Staters traditionally have been known as late deciders, and with just under three months to go until New Hampshire’s February primary, that’s reflected in the new survey. Fourteen percent of those questioned said they were undecided, and nearly two-thirds of those who said they’re backing a candidate suggested they might change their mind before the primary day.

The poll was conducted as former New York City Mayor Mike Bloomberg started taking steps toward jumping into the presidential nomination race. Aides to the billionaire business mogul and environmental and gun control crusader said Friday that if Bloomberg were to run, he’d likely skip campaigning in New Hampshire and the three other early voting states in the primary and caucus presidential nominating calendar.

The Quinnipiac University poll was conducted November 6-10, with 1,134 New Hampshire likely Democratic primary voters questioned by live telephone operators. The survey’s margin of error was plus or minus 3.8 percentage points.