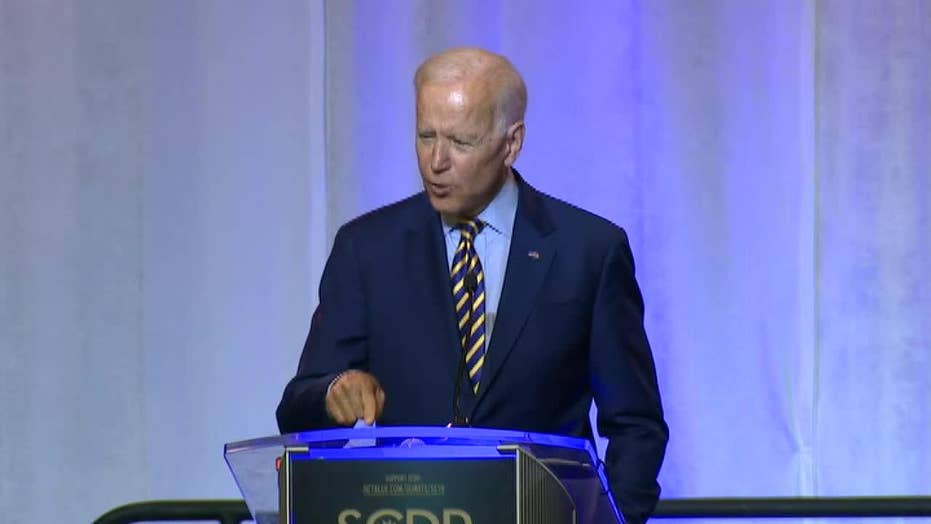 The Democratic presidential primary front-runner’s proposals, published Monday morning in English and Spanish in the Miami Herald and its Spanish publication El Nuevo Herald, were as much of a blueprint of what he would do in the White House as they were a blistering critique of Trump’s record on the divisive issue.

Pointing to the Republican president’s threat last week of Immigration and Customs Enforcement (ICE) deportation raids across the country, Biden argued that it’s “clear Trump is only interested in using his policies to assault the dignity of the Latin community and scare voters to turn out on Election Day, while not addressing the real challenges facing our hemisphere.”

Biden also highlighted the detention of migrant children at the nation’s southern border, implemented last year as part of the administration’s zero-tolerance policy. Accusing Trump of “racist invective,” the former vice president said “under Trump, there have been horrifying scenes at the border of kids being kept in cages, tear-gassing asylum seekers, ripping children from their mothers’ arms — actions that subvert American values and erode our ability to lead on the global stage.”

Trump has repeatedly claimed that he “inherited” the policy from his predecessor, former President Barack Obama.

Biden, who served eight years as vice president under Obama, urged that “the next president must institute effective immigration reform while restoring regional policies grounded in respect.”

“Our asylum system needs to be improved, but the answer is to streamline and strengthen it so that it benefits legitimate claims of those fleeing persecution, while reducing potential for abuse,” he said.

Biden also called for giving U.S. citizenship to the thousands of young undocumented immigrants brought into the country illegally by their parents, saying they are "Americans, and Congress needs to make it official."

These so-called Dreamers were granted legal protections through the Obama-era Deferred Action for Childhood Arrivals (DACA) program. Trump has sought to end that status.

"The millions of undocumented people in the United States can only be brought out of the shadows through fair treatment, not ugly threats," Biden said. "Trump’s efforts to repeal Temporary Protected Status (TPS) across the board have injected unnecessary uncertainty into the lives of thousands of families.”

Still, Biden said “it’s imperative that we secure our borders.” But he argued that Trump’s campaign promise to “build the wall” along the U.S. border with Mexico “is a slogan divorced from reality.”

Biden said, if elected, he would “focus instead on improving screening procedures at our legal ports of entry and making smart investments in border technology. These are sensible policies that will do more for our security than a wall ever could.”

The Republican National Committee touted that the President's "shown real leadership to address the growing crisis at the border.

And taking aim at Biden, RNC spokesperson Mandi Merritt argued that "during eight years in office, the Obama-Biden administration did nothing to curb illegal immigration or pass meaningful reform. Joe Biden may be trying to feign moral outrage now, but Americans know who has had their back in this fight."

Biden also criticized Trump’s diplomatic efforts in Venezuela, arguing Trump "has badly misjudged what it will take to bring democracy back to Venezuela, and his increasing belligerence threatens the international coalition of more than 50 countries that recognize Juan Guaido as the interim President of Venezuela.”

But he didn’t mention that Trump was the first world leader to recognize Guaido as the legitimate leader of Venezuela and helped build a coalition of countries that oppose the regime of Nicolas Maduro.

Trump has accused the Obama administration of failing to place enough tough sanctions on Maduro’s regime.

The release of Biden’s proposal comes three days after not appearing for a National Association of Latino Elected Officials conference that was attended by eight of his rivals for the Democratic nomination. Biden was criticized by Latino leaders for skipping the conference. The event was held in Miami, which will also be the site of this week’s first round of Democratic primary debates.