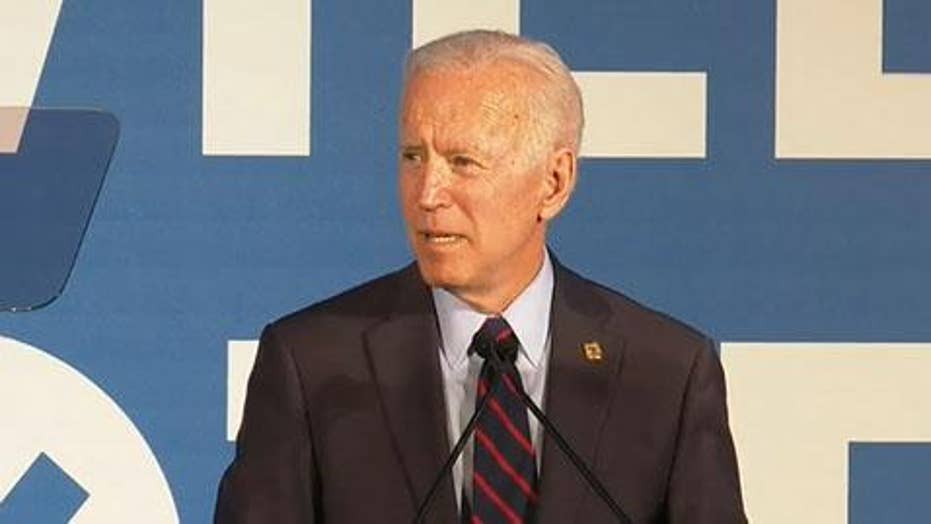 The doctor who treated Joe Biden during his eight years as vice president is giving the Democratic presidential candidate’s health a thumbs-up.

"Vice President Biden is a healthy, vigorous 77-year-old male, who is fit to successfully execute the duties of the presidency, to include those as chief executive, head of state, and commander in chief,” Dr. Kevin O’Connor said Tuesday in a statement released by the Biden campaign.

O’Connor, who served in the Army, was assigned as White House physician to the vice president from 2009 to 2017.

Questions about Biden’s health and age have repeatedly come up since even before the former vice president declared his candidacy in April. In September, Biden committed to publicly releasing his medical records before the Iowa caucuses, to try and put to rest concerns over whether he was fit enough to take on President Trump in a general election campaign -- and whether he would be up to the rigors and stress of serving as president.

Biden is one of five septuagenarian candidates in the race for the White House. Democratic nomination rivals Sen. Bernie Sanders of Vermont is 78, former New York City Mayor Mike Bloomberg is 77, Sen. Elizabeth Warren of Massachusetts is 70, and President Trump is 73.

Biden has repeatedly downplayed scrutiny over his health, at times challenging skeptics to such physical tests as arm wrestling or pushups.

The release of his medical history was the first for Biden since 2008, when he was the running mate on the Democratic ticket headed by Barack Obama. At the time, doctors found that he had an irregular heartbeat.

In his report, O’Connor said that Biden is currently being treated for non-valvular atrial-fibrillation, better known as A-fib, which is an irregular heartbeat. He said Biden is also being treated for hyperlipidemia, which is an abnormally high concentration of fats or lipids in the blood, as well as gastroesophageal reflux, a digestive disorder that occurs when acidic stomach juices, or food and fluids back up from the stomach into the esophagus. And he noted that Biden – as many Americans do – suffers from seasonal allergies.

Last week, Warren released a note from her doctor regarding her health. Dr. Beverly Woo said that the Massachusetts senator was in "excellent health" and shared that Warren’s "only medical condition" was an under-active thyroid gland.

Bloomberg also made public a letter from a physician last week, which said he was "in outstanding health" and "great physical shape."

In February, President Trump had his second full physical exam since winning the White House. His physician, Dr. Sean Conley, said in a statement that a team of 11 doctors had examined Trump and that he was in “very good health.”

Last month there was speculation regarding the president’s health due to an unannounced trip to Walter Reed Medical Center. But Conley said that “despite some of the speculation, the president has not had any chest pain, nor was he evaluated or treated for any urgent or acute issues.”

Sanders was briefly sidelined from the campaign trail in October after suffering a heart attack. Sanders later admitted to missing warning signs of his medical condition.