Oncologist Dr. Zeke Emanuel, one of 10 advisory board members named to Democratic President-elect Joe Biden's coronavirus task force, has pushed the U.S. and other countries to not hoard a coronavirus vaccine.

Emanuel, who served as a key architect of the Affordable Care Act under the Obama administration, co-authored a paper in September in which he encouraged officials to follow the "Fair Priority Model," which calls for a "fair international distribution of vaccine," rather than what he and his co-authors characterized as "vaccine nationalism."

The model allows the country that produces the vaccine to hold onto enough of a supply to reach a threshold for herd immunity ("Rt below 1"). Beyond that, the model supports distributing the vaccine internationally, which means giving away or selling doses of the vaccine before it's available to every citizen in that country, Emanuel explained to Scientific American.

“Reasonable national partiality does not permit retaining more vaccine than the amount needed to keep the rate of transmission (Rt) below 1, when that vaccine could instead mitigate substantial COVID-19–related harms in other countries that have been unable to keep Rt below 1 through ongoing public-health efforts," the Science magazine article titled "An ethical framework for global vaccine allocation" argues.

"Associative ties only justify a government's giving some priority to its own citizens, not absolute priority," Emanuel wrote with his co-authors. 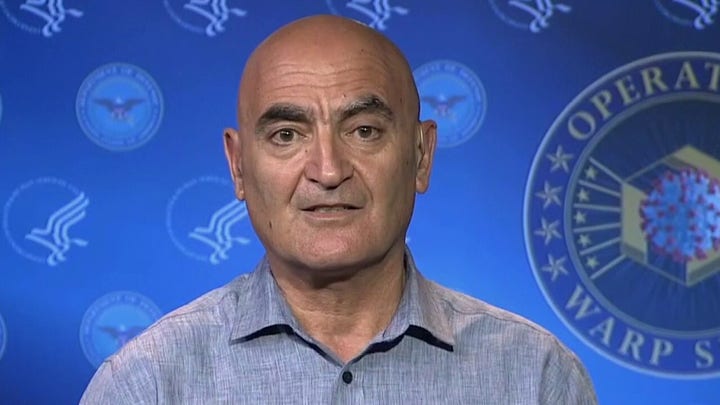 "Our first priority of course is to develop and produce enough quantity of safe and effective FDA-approved vaccines and therapeutics for use in the United States," Health and Human Services Secretary Alex Azar said during an August visit to Taiwan.

"But we anticipate having capacity that, once those needs are satisfied, those products would be available in the world community according to fair and equitable distributions that we would consult in the international community on," Azar said.

Congress approved nearly $10 billion for the Trump administration's Operation Warp Speed, which is working with private companies to produce and distribute a vaccine in the U.S.

On Monday, Pfizer and BioNTech's coronavirus vaccine moved a step closer toward approval, with the company announcing 90% efficacy in its phase 3 clinical trial.

Emanuel and his co-authors argued against a proposal by the WHO to distribute vaccines globally at a rate proportional to each country's population, and dismissed the belief that high death toll could be avoided by providing vaccines to countries based on "the number of frontline health care workers, the proportion of population over 65, and the number of people with comorbidities."

The WHO proposal fails to consider the fact that death is not the only form of harm, Emanuel argued, and that prioritizing seniors at higher risk would mean sending a disproportionate amount of vaccines to wealthier countries, where average life expectancies tend to be longer.

Instead, Emanuel and his co-authors advocated for focusing on preventing premature death, the consequences of school and business closures and reducing general transmission of the virus.

Emanuel came under focus over the weekend after a 2014 essay he wrote, in which he outlines why he doesn't want to live past 75, resurfaced.

Emanuel, 63, wrote that "by 75, creativity, originality and productivity are pretty much gone for the vast, vast majority of us" in his essay titled "Why I Hope to Die at 75."

"Since 1960, however, increases in longevity have been achieved mainly by extending the lives of people over 60. Rather than saving more young people, we are stretching out old age," Emanuel wrote.

Other coronavirus task force advisory board members selected by Biden include Rick Bright, who said he left his position at NIH under President Trump over the administration's embrace of hydroxychloroquine, and Dr. Atul Gawande, former CEO of Haven, a health care venture founded by Amazon, Berkshire Hathaway and JPMorgan Chase in 2018.

Emanuel did not respond to Fox News' request for comment at this time.