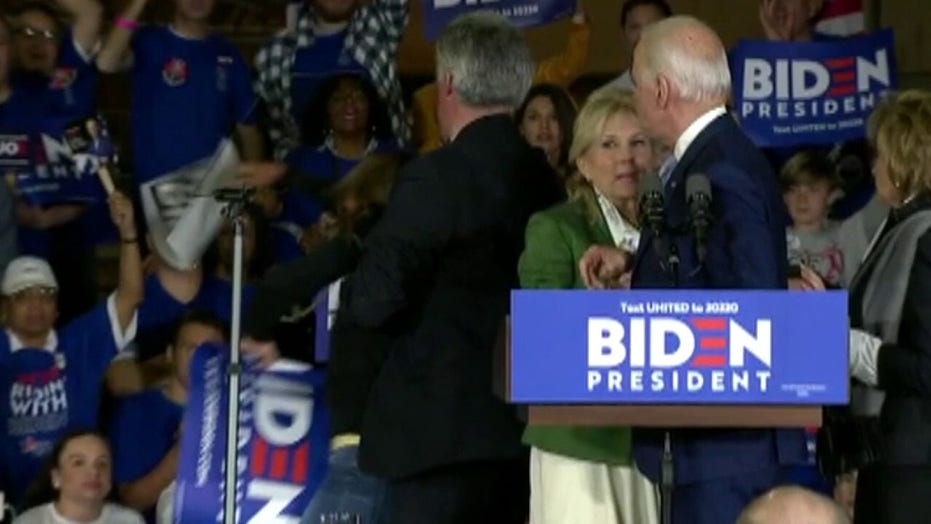 Joe Biden gave a shout out to his bodyguard wife Saturday as he faced more protesters during his first big campaign rally since Super Tuesday's melee.

“Folks, my wife got to meet some of these people last rally,” Biden said with a big smile.

Vegan activists stormed the stage during Biden's Super Tuesday comeback speech in Los Angeles. Jill Biden stopped a lunging protester by grabbing her wrists and blocking her from getting near her husband.

On Saturday, the anti-dairy activists were screaming and chanting from afar, but this time didn't make it close to the stage.

As the protesters continued, holding "Let Dairy Die" signs, an upbeat Biden urged his supporters to ignore them.

“These guys are doing exactly what Trump does, so don’t pay attention to them. OK," Biden said. "The days of Donald Trump’s divisiveness are soon to be over.”

Fresh off of winning 10 of 14 states on Super Tuesday, Biden touted his comeback. He spoke outdoors with the Gateway Arch in the backdrop to about 1,500 people -- a much bigger crowd than he drew in the early states of Iowa and New Hampshire.

"What a difference a week makes!" Biden said.

Biden spoke only for about 10 minutes but took a jab at rival Sen. Bernie Sanders, who has staked his campaign on the ability to bring more Americans -- particularly young people -- out in droves to the polls.

The Democratic turnout overall has risen, with Iowa, North Carolina and Texas topping 2016 levels, but not the 2008 spike with then-Sen. Barack Obama on the ballot. Virginia was an exception, jumping from 986,000 votes in 2008 to 1.3 million.

Much of that increase is coming in American suburbs, which has been a boost to Biden and will be pivotal to the November general election.

"Folks, you are all part of the movement... A movement that is going to defeat Donald Trump and restore this nation," Biden said Saturday.

Meanwhile, Sanders, I-Vt., on Saturday expressed doubt that Biden can “generate enthusiasm” due to the support he is getting from dozens of billionaires -- while promising to back the former vice president if he is the nominee.

“The American people are disgusted with billionaires buying elections. We believe in democracy, one person one vote, not billionaires spending hundreds of millions of dollars ” Sanders told supporters in Dearborn, Mich.

“I just don't think that Joe Biden can generate enthusiasm when you got 60 billionaires contributing to his campaign,” he said to boos.

Biden and Sanders will next face off on Tuesday when voters in Michigan, Idaho, Mississippi, North Dakota, Missouri and Washington state head to the polls.

Fox News' Adam Shaw and Madeleine Rivera contributed to this report, as well as The Associated Press.