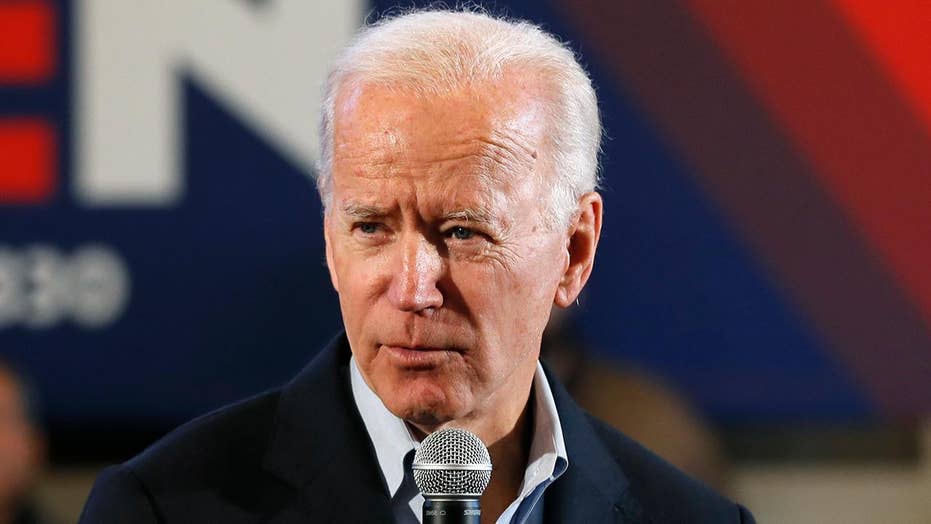 2020 Democrat hopeful Joe Biden tells Fox News' Peter Doocy he will not voluntarily appear if called to testify in a Senate impeachment trial for President Trump.

Former Vice President Joe Biden claimed in a new interview that when his son Hunter was a board member of Ukrainian energy company Burisma Holdings while he was in office, no one informed him that it could pose a problem.

Biden insisted again that Hunter did nothing wrong, but this time appeared to fault his staff for not cluing him in that there could be concerns about his son's involvement with the foreign company that had been under investigation while Biden was in office and dealing with Ukraine policy.

State Department official George Kent addressed this during his testimony as part of the impeachment inquiry of President Trump, acknowledging that he told staff members there was concern over the appearance of a conflict of interest, but that no one told the vice president because his older son Beau was suffering from what was ultimately a fatal battle with brain cancer.

"They should have told me," Biden says now. Hunter's dealings and the elder Biden's role ousting a prosecutor looking into Burisma are being used by Trump and his supporters against the now-2020 presidential candidate, even as Trump's effort to press for an investigation into that conduct has spurred the impeachment inquiry.

"The appearance looked bad and it gave folks like Rudy Giuliani an excuse to come up with a Trumpian kind of defense, while they were violating the Constitution," Biden said.

Trump's impeachment inquiry has focused primarily on his request for Ukrainian President Volodymyr Zelensky to investigate the Bidens, as well as Democratic activities during the 2016 election. Democrats have accused Trump of using a White House visit for Zelensky and the delay of military aid to Ukraine as leverage.

Trump insists he did nothing wrong and that he never called for any quid pro quo with the investigations. His administration claims that Trump was simply concerned about corruption within the Ukrainian government, asserting that is part of why he delayed the aid. Trump has also hammered the Bidens for alleged impropriety, blasting the former vice president for pressuring Ukraine to fire a prosecutor who was investigating Burisma.

In the past, Biden has bragged publicly about threatening to withhold money from Ukraine in order to force the prosecutor's termination, but he claims it was due to suspicions of corruption, not because of his son's role with Burisma.

Former Secretary of State John Kerry, who recently endorsed Biden for president, also claimed following a Biden campaign event Sunday that he "had no knowledge" of Hunter's involvement with Burisma while he was secretary.

This, despite Kerry's stepson Christopher Heinz reportedly notifying two of Kerry's aides after Hunter Biden became a Burisma board member. Heinz and Hunter Biden had been business partners, co-owning the private equity firm Rosemont Seneca. According to the Washington Examiner, an email from Heinz to Kerry's aides distanced Heinz from Burisma, saying "there was no investment by our firm in their company," and claiming ignorance as to why Hunter became involved in the Ukrainian firm.