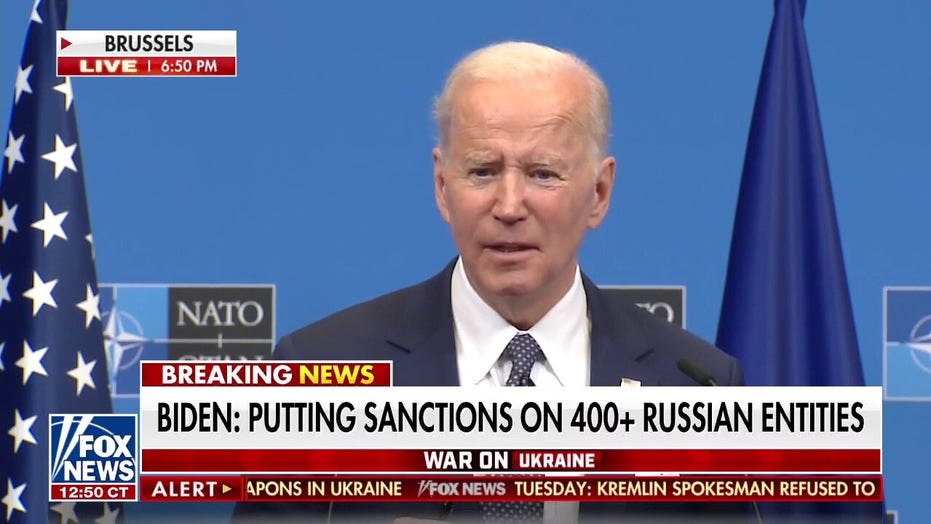 President Biden announces the U.S. will send $1 billion in humanitarian aid to Ukraine and takes questions from the press following emergency meetings at the NATO summit in Brussels, Belgium.

President Biden on Thursday said he believes that China’s desire to be competitively engaged on the global market will deter it from aiding Russian President Vladimir Putin during his deadly war in Ukraine.

"China understands that its economic future is much more closely tied to the West than it is to Russia," Biden told reporters speaking from a NATO summit in Brussels. "And so I'm hopeful that he does not get engaged."

President Biden speaks about the Russian invasion of Ukraine during a news conference after a NATO summit and Group of Seven meeting at NATO headquarters, Thursday, March 24, 2022, in Brussels.  (AP Photo/Evan Vucci)

NATO CALLS ON CHINA TO REFRAIN FROM SUPPORTING 'RUSSIA'S WAR EFFORT,' USE 'SIGNIFICANT INFLUENCE' FOR PEACE

The president's comments echoed statements made by NATO earlier Thursday after the 30-member alliance called on China to abandon any notions of aiding Moscow militarily or economically.

Reports have surfaced in recent weeks suggesting that the U.S. and its European allies had received credible evidence to suggest China has considered backing its ally.

But in speaking to Chinese President Xi Jinping last week, Biden warned there would be consequences if Beijing is found to be providing "material support" to Putin.

"I made no threats, but I made it clear to him [to] make sure he understood the consequences of him helping Russia," the president told reporters.

Biden said he and Xi have had "long discussions" about China’s interest in economic relations and growth with the U.S. and Europe.

"And I indicated that he'd be putting himself in significant jeopardy and those aims," Biden added, pointing to the number of corporations and businesses that have left Russia following its invasion of Ukraine.

Biden said the U.S. and its European allies will look to establish a systematic review of any nation that has helped Putin to skirt the heavy sanctions he, along with other Russian social and government elites, banks and businesses, were placed under.

The president on Thursday additionally called for Russia to be barred from the G-20, a coalition of 19 nations and the European Union that seeks to establish global economic stability.

Biden said that if nations like Indonesia, which has strong ties to Moscow, opposed removing Russia from the intergovernmental forum, then Ukraine should be allowed to "attend" the meetings.