The Biden administration is reportedly planning to allow child migrant shelters to fill to full capacity as the administration scrambles to handle the border crisis, dropping a previous requirement that they limit themselves to just 50% amid COVID-19 precautions.

Axios first reported that the Centers for Disease Control (CDC) has drafted a memo that would allow them to fill to 100% capacity and tells facilities that they should "plan for and expect to have COVID-19 cases."

TRUMP TEARS INTO BIDEN FOR 'SPIRALING TSUNAMI' AT THE BORDER, AMID SPIKE IN MIGRANT NUMBERS

Health and Human Services later said in a statement to Fox News that, "based on CDC guidance, [HHS' Office of Refugee Resettlement] has notified facilities they may temporarily reactivate capacity within their full licensed capability up to safe occupancy levels."

"The same instruction applies to influx facilities up to what ORR and the contractor determine to be safe for influx. In both instances, reactivating beds must be done in a way that maintains a safe and healthy environment for [unaccompanied children] and staff," the statement said.

The agency said that guidance also called for strengthened COVID mitigation strategies in order to avoid outbreaks at facilities. It also said it is committed to "aggressively" move toward acquiring enough state beds to reduce the need for influx facilities.

"Additional shelter capacity will minimize the likelihood that children remain in Border Patrol stations longer than necessary, where they are also exposed to COVID-19 transmission risks as well as child welfare concerns associated with such settings," the statement said. "Over-capacity Border Stations pose a greater infection risk to children than ORR program sites that are operating at full licensed capacity but use other COVID-19 mitigation measures."

The move marks the latest action by the Biden administration to cope with a surge in migrant encounters at the border, particularly of unaccompanied children. It has opened a new facility in Carrizo Springs, Texas, to handle unaccompanied children. Additionally, it is looking at sending child migrants to a military base in Virginia.

The migrant surge has quickly morphed into a crisis and major political headache for the Biden administration, as Republicans point to a number of measures by Biden to roll back Trump-era border protections as the reason for the surge.

The administration has rolled back the Migrant Protection Protocols (MPP), which kept migrants in Mexico as they waited for their hearings to process, and has narrowed enforcement priorities for Immigration and Customs Enforcement (ICE.) Additionally, Mexico's refusal to accept additional families with children under age 12 in areas where migrants camps grow increasingly large has contributed to the release of families into the interior of the U.S. 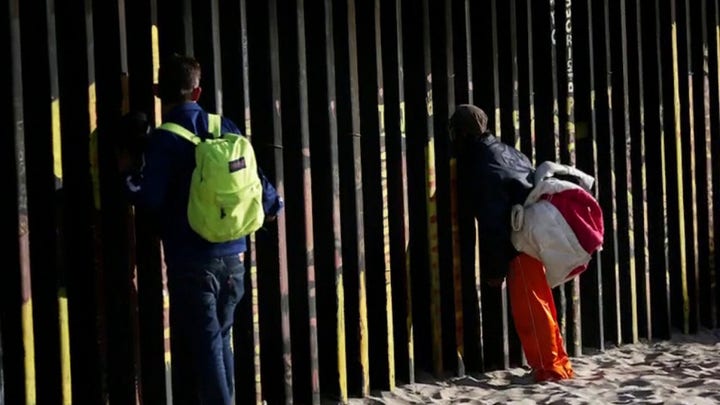 Additionally, it has ended asylum agreements with Northern Triangle countries and proposed a sweeping immigration proposal that would see citizenship granted to millions of illegal immigrants.

The administration has denied there is a crisis, describing it as a "challenge" instead, and promising to end the "cruelty’ from the Trump administration and replace it with "an orderly humane and safe immigration process."

Republicans, on the other hand, have urged Biden to reinstate a national emergency declaration and change course on policy. Former President Donald Trump on Friday issued a rare statement in which he accused his successor of creating a "spiraling tsunami" at the border.

"Our border is now totally out of control thanks to the disastrous leadership of Joe Biden," Trump said in a lengthy statement.

"We don't take our advice or counsel from former President Trump on immigration policy, which was not only inhumane but ineffective over the last four years," she said.