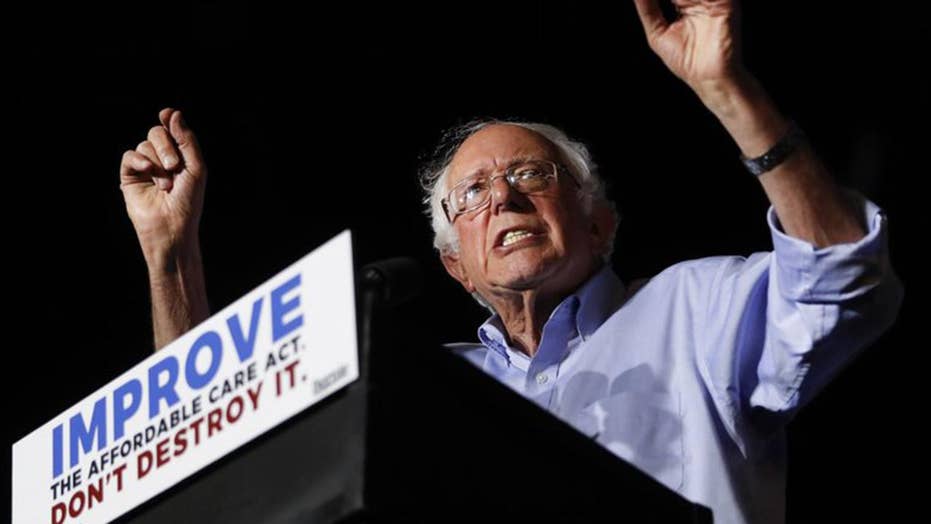 How the Bernie Sanders approach to health care is becoming mainstream. Leland Vittert has more.

Vermont Sen. Bernie Sanders was ripped on Reddit for shamelessly promoting his new book after being asked to name his favorite book.

The Democratic Socialist appeared on Reddit’s “Ask Me Anything” (AMA) on Friday, where supporters and foes alike can directly pose questions to the senator.

“I'm on @reddit_AMA right now answering your questions about the election on Tuesday - the most important election of our lives. AMA!” Sanders tweeted before the session.

But one Sanders’ answer in particular prompted mockery and criticism after brazenly plugging his book when quizzed about his favorite book.

“My favorite book at the moment is a brand new book that I wrote that will be coming out in a couple weeks called ‘Where We Go From Here,’” he wrote in an answer.

“This book talks about the work that I and other progressives have been doing over the last two years in opposition to Trump’s reactionary agenda and how we go forward in creating a government that works for all, and not just the wealthy few.”

STATE OF THE MIDTERMS: SENATE 'TOSS-UPS' COULD STILL LEAD TO DEMOCRATS WRESTING CONTROL FROM GOP

One answer by Bernie Sanders prompted mockery and criticism after brazenly plugging his book when quizzed about his favorite book. (Reddit)

The answer wasn’t met with the excitement Sanders may have hoped for, with most Reddit users “downvoting” it and making it the most disliked comment of the day across the whole platform.

“This is honestly a terrible answer. It's egotistical, unrelatable, and is simply to push your book. Sorry, you can do better than this Bernie,” said one Reddit user in reply to Sanders’ answer.

"This is honestly a terrible answer. It's egotistical, unrelatable, and is simply to push your book. Sorry, you can do better than this Bernie."

“I've been passionately following Bernie since 2015 and this is the first time I went ‘BOOOOOOOO’ when reading something ‘he’ wrote,” wrote another user. “This is stupid and you should rectify it immediately. Don't come here and ‘fellow kids’ us.”

Others pointed out the grifting nature of Sanders’ comment. “Bernie just cares about money to buy his next lake house,” said a commentator. “As if he was trying to sell something in an almost Capitalist way,” another one added.

"Bernie just cares about money to buy his next lake house."

Sanders was commissioned to write the book by Macmillan-St. Martin's Press and received a hefty $505,000 book advance, according to his 2017 financial disclosure report.

“This is actually quite refreshing to see,” a Reddit user said in reference to the backlash the senator received. “This generation will f------ eviscerate you if you're inauthentic, regardless of star power.”