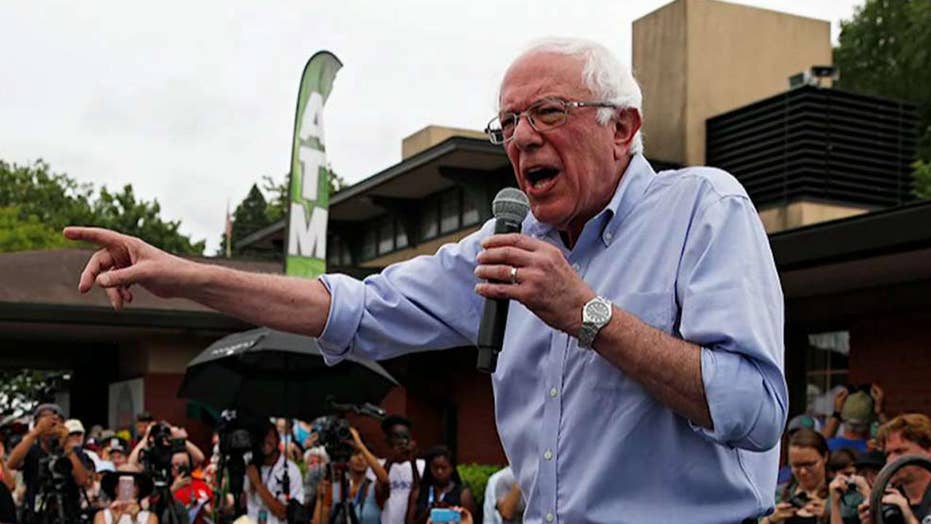 Democratic presidential candidate Bernie Sanders was discharged from a Nevada hospital on Friday, as his doctors acknowledged for the first time that the 78-year-old had suffered a heart attack earlier in the week.

The Sanders campaign released statements from his treating physicians acknowledging Sanders was diagnosed with a myocardial infarction – commonly known as a heart attack.

“After presenting to an outside facility with chest pain, Sen. Sanders was diagnosed with a myocardial infarction,” the doctors, Arturo Marchand Jr. and Arjun Gururaj, said. “He was immediately transferred to Desert Springs Hospital Medical Center.”

Sanders' campaign announced Wednesday that the senator from Vermont was recovering after an emergency procedure Tuesday to repair a blocked artery and that campaign events were being canceled. On Friday, Sanders said he feels "great."

“I want to thank the doctors, nurses, and staff at the Desert Springs Hospital Medical Center for the excellent care that they provided,” Sanders said in a statement released by his campaign. “After two and a half days in the hospital, I feel great, and after taking a short time off, I look forward to getting back to work.”

SANDERS WILL ATTEND NEXT DEBATE DESPITE PAUSE AFTER HEART PROCEDURE, CAMPAIGN SAYS

Soon after, he posted a video on Twitter showing him standing at a Las Vegas park with his wife Jane

"I just got out of the hospital a few hours ago and I'm feeling so much better," Sanders said. "See you soon on the campaign trail."

Sanders and his wife both thanked people for their warm wishes. The candidate was expected to return to Vermont.

“The senator was stable upon arrival and taken immediately to the cardiac catheterization laboratory, at which time two stents were placed in a blocked coronary artery in a timely fashion. All other arteries were normal,” they said.

The doctors added: “His hospital course was uneventful with good expected progress. He was discharged with instructions to follow up with his personal physician.”

Sanders himself posted a message on Twitter Wednesday afternoon to reassure his followers that he was on the mend and to do some campaigning for his push for universal healthcare dubbed "Medicare-for-all."

"Thanks for all the well wishes," Sanders tweeted. "I'm feeling good. I'm fortunate to have good health care and great doctors and nurses helping me to recover."

He added: "None of us know when a medical emergency might affect us. And no one should fear going bankrupt if it occurs. Medicare for All!"