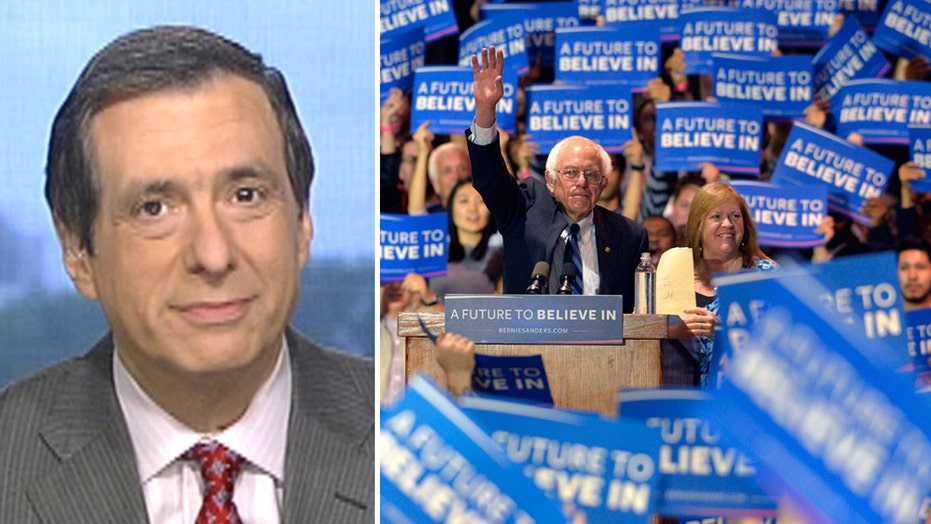 So maybe the crazy convention won’t be in Cleveland after all, but in Philadelphia.

Bernie Sanders is taking plenty of heat from the party and the press over some of his out-of-control supporters. Debbie Wasserman Schultz is openly scolding him. And while Sanders has no hope of keeping the nomination from Hillary Clinton, especially after her razor-thin victory in Kentucky, this spells nothing but trouble for the Democrats.

Suddenly, the Republicans aren’t the only party divided by protests and civil war.

The tone is captured by this Sacramento Bee editorial:

“A lot of Democrats don’t want to admit it, but Donald Trump isn’t the only presidential candidate playing with fire and recklessly courting an angry mob.”

The editorial says that Sanders “has largely weaseled out of his responsibility to make it clear to his supporters that this is not acceptable behavior.”

All this was triggered by some ugliness at the Nevada convention, in a state already won by Clinton. Bernie supporters felt they were being treated unfairly when the delegates were allocated. Some of them threw chairs and disrupted the proceedings. And Democratic state chairwoman Roberta Lange received a series of threats, some of them using the C-word and other slurs.

“I just wanted to let you know that I think people like you should be hung in a public execution to show this world that we won’t stand for this sort of corruption. You cowardless bitch, running off the stage! I hope people find you.”

I can’t quote most of the others.

Sanders, in a statement, dutifully denounced “any and all forms of violence,” but added: “If the Democratic Party is to be successful in November, it is imperative that all state parties treat our campaign supporters with fairness and the respect that they have earned.”

That led to this blast by Wasserman Schultz on CNN: “With all due respect, when there is a ‘but’ in between condemnation of violence generally, and after the word ‘but’ you go on to seemingly justify the reason that the violence and intimidation has occurred, then that falls short of making sure that going forward this kind of conduct doesn’t occur in the future.”

If you doubt this is turning into a grudge match, look at what Sanders campaign manager Jeff Weaver told MSNBC: “It’s been pretty clear almost from the get-go that she has been working against Bernie Sanders — I mean, there’s no doubt about it — for personal reasons.”

Salon says the Bernie fanatics seem to direct their ire at women like Debbie and Barbara Boxer, “which isn’t to say this is all about sexism. A lot of the problem is because the Sanders campaign is a dead campaign walking. There’s no way Sanders can win at this point. It creates a situation where some of the more realistic and sober-minded Sanders supporters are cutting their losses and moving on…

“Without the moderating force of the more realistic Sanders supporters, the voices of the dead-enders — who are more prone to rage, misogyny, and conspiracy theories — have a disproportionate influence.”

I have no doubt that the Vermont senator doesn’t condone violence. But in a broader sense, I have no idea what he wants as he continues to hammer Hillary in the late stages of a race he must know he is going to lose. It doesn’t feel like he’ll settle for a few platform tweaks in Philly. And while I don’t blame his supporters for being frustrated if they’re maneuvered out of a few delegates, can anyone seriously argue that Clinton, who is ahead by 250 pledged delegates, hasn’t won this nomination fairly? The superdelegates may give her an unfair edge, but that’s been the Democratic system for many years.

And here’s why the media’s inevitable comparisons to Trump are off the mark. Some of his events were disrupted by protestors, and in some cases thugs, who despise him. Now it’s true that in some instances Trump supporters hit back at protestors, at times encouraged by Trump, and that was fair game for criticism.

But in this case the unrest is being driven by Bernie’s own supporters. And if they misbehave at the convention, it could be a long four days for Hillary Clinton.