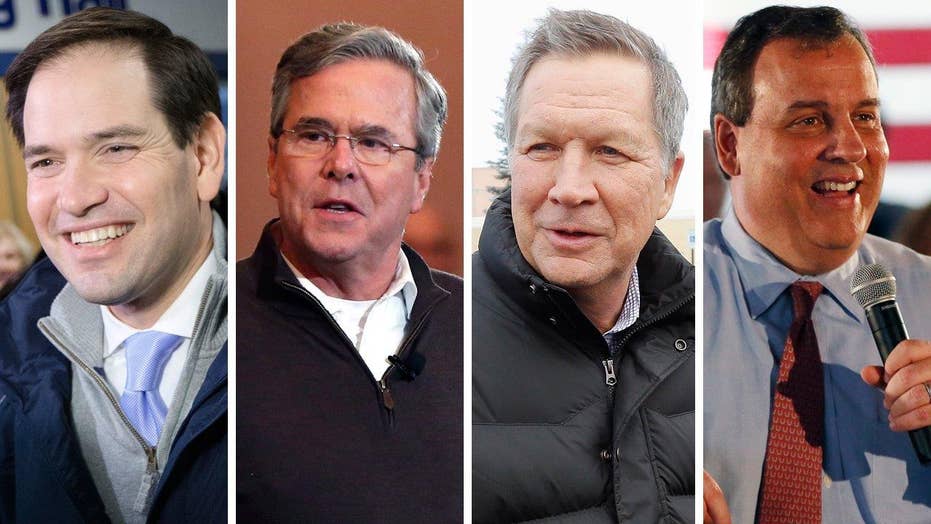 Race for second place heats up in New Hampshire

When is second place a victory? When you’re running against Donald Trump in New Hampshire.

With the billionaire businessman leading just about every Granite State poll going into the first-in-the-nation primary, the big question when returns come in seems to be who will snag the coveted No. 2 slot.

The race for second – and for that matter, third – is a crowded one on the Republican side. On the heels of the Iowa caucuses, Florida Sen. Marco Rubio seemed to be the one with the momentum, surging in the polls after his strong third-place finish. But he was thrown off his stride at Saturday’s debate where New Jersey Gov. Chris Christie challenged his readiness and mocked him for relying on scripted anti-Obama “talking points.”

Rubio, for his part, is not backing off the anti-Obama “talking points” Christie hammered him for at Saturday’s debate. The senator told Fox News he’s only saying what he believes, that “Barack Obama is changing America.”

He stressed that no matter how New Hampshire decides, there’s plenty of presidential race left to go.

“Obviously, we want to do well here in New Hampshire and get as many delegates as we can.  The same is true in South Carolina and in Nevada,” he said. “I feel very confident that as we move forward in this process, that's what we're going to wind up at.”

The New Hampshire race has shaped up in a sense as a contest between governors and senators -- with the three current and former governors in the race pitting their on-the-job experience against the popular appeal of the contest’s two senators. Cruz and Rubio placed first and third in Iowa, respectively.

Bush, Kasich and Christie all failed the make the leaderboard in the leadoff caucuses, though, and the pressure is perhaps highest on them to do well in New Hampshire.

Bush has revived a long-simmering feud with Trump in the run-up to the primary, first going after him at Saturday’s debate for his support as a developer for eminent domain powers and then on Twitter for his past criticism of Sen. John McCain’s war record.

Their dispute has essentially devolved into a nasty bout of name-calling.

In a tweet, Bush called Trump a “whiner” and a “loser” – after Trump called him “desperate” and “not a man.”

Trump, though, told Fox News that Bush is “weak” on the issues of immigration and more.

Despite the drama surrounding candidates like Bush and Christie, it is Kasich who – with an upbeat message and approach focused on his Ohio record – has gradually been climbing in the polls ahead of the New Hampshire vote. The RealClearPolitics polling average showed him in third position in the state, just ahead of Cruz and Bush.

The polls in New Hampshire are not always the greatest indicator of success, however, as the state allows “undeclared” voters to affiliate with a party at the polling site and vote in that party’s primary.

A large break of unaffiliated voters for one candidate could lead to a primary night surprise.

On the Democratic side, meanwhile, Vermont Sen. Bernie Sanders is looking to answer Hillary Clinton’s narrow Iowa caucus victory with a win of his own Tuesday night.

The Vermont senator, like Trump, has been leading in New Hampshire polling for months.

Polls begin to close in the state starting at 7 p.m. local time, and all are set to close by 8 p.m.