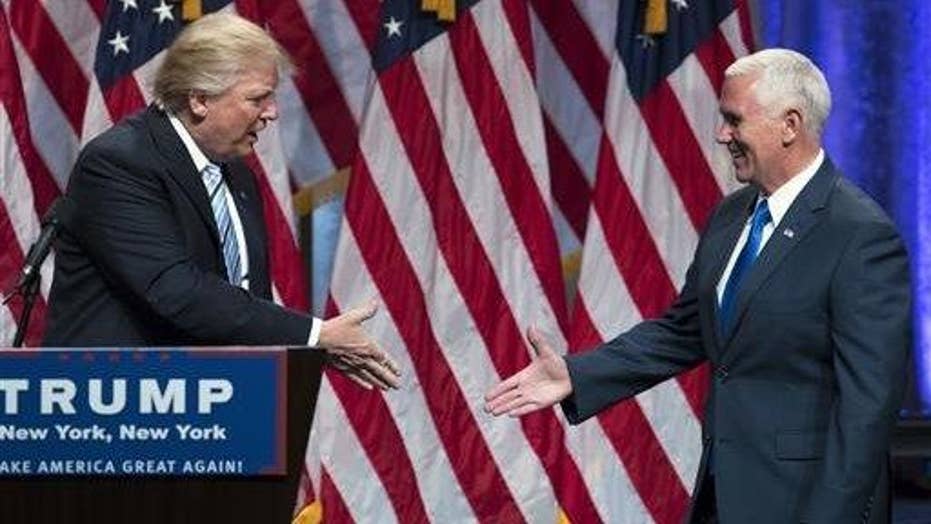 Donald Trump and Indiana Gov. Mike Pence appeared on stage for the first time as a presidential and vice-presidential ticket Saturday, warning Americans about the perils of electing Hillary Clinton and vowing to make the country safe and prosperous again.

“I am here to introduce the man who will be my partner in the campaign and in the White House to fix the rigged system,” Trump said at a Hilton hotel in New York City. “I found a leader who will help us deliver a safe society and a prosperous society.”

Before bringing Pence on stage, Trump delivered a blistering stump speech that touted his agenda and attacked Clinton, the presumptive Democratic presidential nominee. The real estate mogul argued that Clinton's failures as secretary of state have led to a rise in global terror attacks that are destroying the world.

“The Middle East is out of control,” said Trump, who planned to hold an event Friday announcing Pence as his running mate but was forced to postpone it because of Thursday's terror attack in Nice, France, that killed at least 84 people.

Trump instead tweeted on Friday that he’d selected the 57-year-old Pence, taking away much of the drama that typically comes with announcing a vice presidential nominee.

“I thank Donald Trump for having the confidence in us. I accept your invitation to run and serve as vice president of the United States,” Pence said Saturday.

“Let’s come together as a party, as a movement, to make America great again," Pence also said, while suggesting that he knew as early as Wednesday that he would be the nominee.

Pence, who also acknowledged growing up as a Democratic supporter, called Trump a “builder, a fighter and a patriot."

“Americans can choose a leader who will fight to make America great again, or we can elect someone who personifies failed establishment,” he said. “Seven-and-a-half years of Obama and Hillary Clinton weakened the world.”

The selection of Pence, who went from dark horse to leading contender in a matter of days, should help Trump galvanize support from the party’s conservative base ahead of the Republican National Convention, which starts Monday in Cleveland.

Pence, a former member of the House Republican leadership, was among a handful of finalists in a public vetting process that included meetings and campaign events with New Jersey Gov. Chris Christie and former House Speaker Newt Gingrich.

He was selected from a relatively small short-list of candidates -- those liked by Trump and willing to stake their political future on the unconventional and unpredictable White House contender.

Despite the claim, the Clinton campaign on Saturday released a web video contrasting clips of Trump touting his decisiveness with the timeline of the past few days. As the video ends, the words on the screen read, "Donald Trump. Always Divisive. Not so Decisive."

And Trump said Saturday that he locked onto Pence in early May when he won Indiana’s presidential primary, in large part due to Pence’s fiscal record -- delivering a balanced budget, creating a $2 million state surplus and allowing Indiana to have a AAA bond rating.

“That’s as good as it gets. The turnaround has been incredible,” said Trump, calling Pence’s early support for Texas GOP Sen. Ted Cruz his “single, greatest non-endorsement.”

Pence, who emerged relatively late in the vice presidential stakes, almost immediately gives the Trump campaign much-needed social conservative credentials without the kind of political baggage that Democrats had hoped to exploit in other finalists like Christie or Gingrich.

Still, the Clinton campaign has already gone on the attack, calling Pence “the most extreme pick in a generation.”

Pence, who spent 12 years in Congress and until Friday was in a tough gubernatorial re-election bid, could also help Trump with critical fundraising, considering his general election campaign has roughly $1.3 million in the bank as of the last filing.

Clinton’s campaign has $42 million and a network of donors assembled through the candidate’s lengthy career in politics.

Pence’s deputy chief of staff was a former spokesman for Koch Industries, and his chief of staff in Congress later ran the Koch brothers’ political umbrella organization.

The original law allowed Indiana residents and companies being sued by a private party to cite their religious beliefs as a defense. The national criticism was so damaging that it forced Pence and the state legislature to revise the law to clearly prohibit businesses from denying services to customers based on their sexual preference or gender choice.

However, both dropped out earlier this month. Corker declined after appearing with Trump at only one campaign event.

Pence, a Catholic, earned a law degree from Indiana University in 1986 and ran two unsuccessful congressional campaigns before getting elected in 2000.