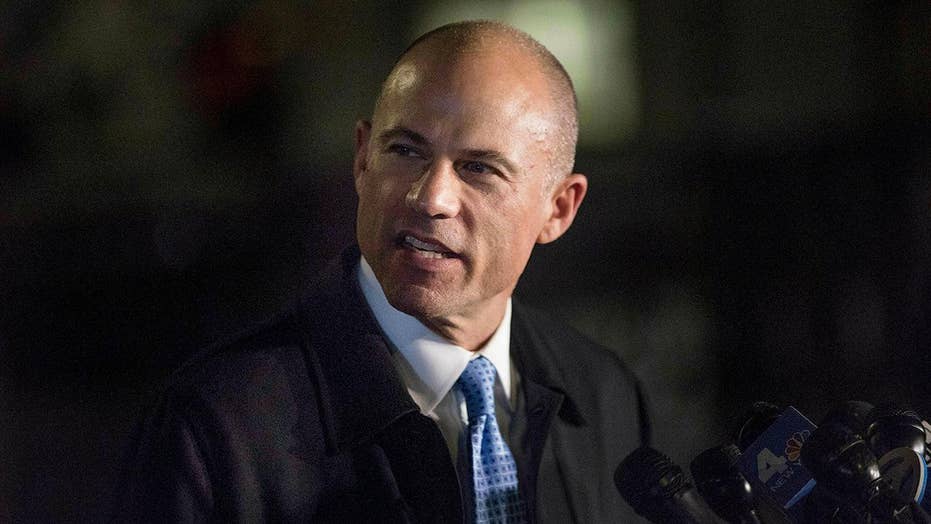 Lawyer accused of trying to extort up to $25 million from Nike; SteynOnline.com's Mark Steyn reacts on 'Tucker Carlson Tonight.'

Celebrity lawyer Michael Avenatti suggested in a fiery statement to Fox News late Monday that the Los Angeles lawyers suing him for allegedly stealing from a former client's settlement fund -- a matter that prompted California prosecutors to slap Avenatti with federal criminal fraud charges earlier in the day -- have political motivations and are "close" to the Trump administration.

Avenatti is looking at up to 47 years in prison on the New York charges if convicted, and 50 years in the California case, which resulted from a much longer-running investigation involving a lengthier paper trail. Avenatti has strenuously denied wrongdoing, and in a tweet early Tuesday morning, thanked his supporters for their "kind words," adding, "It means a lot to me."

Fox News has exclusively obtained text messages and email conversations between Avenatti, 48, and the former client, Gregory Barela, which documented Barela's efforts for several months in 2018 to locate and obtain funds he was owed pursuant to a settlement agreement that resulted from his intellectual property dispute with an out-of-state company.

Financial documents also reviewed by Fox News show that the money had been wired to an account designated by Avenatti on Jan. 5, 2018, but that Avenatti apparently continued to dodge increasingly frantic questions from the client as to where the funds were.

"We did nothing wrong and were entitled to every dollar received," Avenatti told Fox News. "And of course, [Barela] is represented by a person close to Trump."

Avenatti's comments came just a day after Attorney General William Barr announced that Special Counsel Robert Mueller had cleared Trump and his campaign of illegally colluding with Russians -- a matter that, among others, Avenatti had said would bring down Trump's presidency.

Just weeks ago, Avenatti announced that he was no longer representing adult film star Stormy Daniels, following a rocky relationship in which Daniels accused Avenatti of suing Trump on her behalf but without her permission and behaving "dishonestly." A judge has ordered Daniels to pay Trump's legal fees in that matter. On Monday, Daniels said she was "saddened but not shocked" by the charges against Avenatti, and said ominously, "there will be more announcements to come."

Stephen G. Larson, a former George W. Bush-appointed U.S. District Court judge who founded Larson O'Brien LLP and now represents Barela in his civil complaint against Avenatti, told Fox News he was grateful that prosecutors filed criminal charges. Barela's complaint is currently in arbitration, but may soon be moved to state court if Avenatti does not pay the required arbitration fees.

“We and our clients applaud the US Attorney and IRS Criminal Investigation for addressing this matter and we intend to carefully follow its progress through the criminal justice system," Larson told Fox News.

Responding to Avenatti's attacks on his law firm, another partner at Larson O'Brien LLP, Steven Bledsoe, said simply: "Falsification of legal documents and theft of client funds is not a political matter."

"This day has been a long time coming."

Federal prosecutors in California charged that Barela's settlement "called for $1.6 million in settlement money to be paid on January 10, 2018," but that instead, Avenatti gave Barela a "bogus settlement agreement" with a false payment date of March 10, 2018. According to prosecutors' affidavit, Avenatti misappropriated his client’s settlement money, in violation not only of federal law but also state ethics requirements, and used it to pay expenses for his coffee business and other ventures.

"When the fake March 2018 deadline passed and the client asked where the money was," prosecutors said, "Avenatti continued to conceal that the payment had already been received."

Attorney Michael Avenatti leaves Federal Court after his initial appearance in an extortion case Monday, March 25, 2019, in New York. Avenatti was arrested Monday on charges that included trying to shake down Nike for as much as $25 million by threatening the company with bad publicity. (AP Photo/Kevin Hagen).

In March 2018, according to the statement of claims filed in arbitration by Barela's attorneys, Barela visited the Eagan Avenatti law firm in Newport Beach, Calif., to ask about the money -- only to see two attorneys who work with Avenatti, John Arden and Ahmed Ibrahim, allegedly try to keep quiet about it.

In an email dated April 5, 2018, and reviewed by Fox News, Barela wrote to Avenatti that he would "like to discuss my options for collections" on the settlement funds. Ten days later, Barela again sought Avenatti's advice on the "status" of the transfer, and "next actions" to take if the funds were not collected.

On May 7, 2018, Barela wrote that if the company "does not pay soon," he might "need a little help" financially from Avenatti. On May 15, Barela again asked if the company had "respond[ed] or paid." Barela also noted in one conversation that he was planning to host a watch party at his home for an upcoming Avenatti appearance on "60 Minutes."

After several advances of funds from Avenatti, on Oct. 10, 2018, Barela wrote, "I was hoping to have an update" on the settlement funds and "get our money." He tells Avenatti, "I need 8K by Tuesday or I'm in deep sh**," and on Oct. 22, he emailed a dire assessment.

President Donald Trump speaks with the media after stepping off Marine One on the South Lawn of the White House, Sunday, March 24, 2019, in Washington. The Justice Department said Sunday that special counsel Robert Mueller's investigation did not find evidence that President Donald Trump's campaign "conspired or coordinated" with Russia to influence the 2016 presidential election. (AP Photo/Alex Brandon)

"Michael, I was waiting for your call and I know you get busy," Barela wrote on Oct. 22. "I send updates like this so you don't have to dig up old emails. I know your [sic] under pressure so let's discuss what you can or can't do? ... Just so you know I am in real financial trouble and am working on trying to get another loan. I am trying to use the [settlement] agreement to secure it. I need to know that we really have the ability to collect and timing to the best of you [sic] opinion."

The email concluded by asking whether the company had "responded" and "if not what is our next action."

Avenatti did not disclose that he had received the wire transfer in his conversations with Barela, according to Barela's attorneys and a review of emails between Avenatti and Barela, stretching throughout most of 2018.

AVENATTI CUTS TIES WITH STORMY DANIELS -- OR IS IT THE OTHER WAY AROUND?

Avenatti, who briefly considered a bid for the 2020 Democratic presidential nomination and posted a $300,000 bond in New York on Monday, told Fox News earlier this year that Barela's story was "ridiculously false" and "fraudulent," adding that "we previously represented Mr. Barela in multiple matters and he has received 100 percent of what he is entitled to."

Avenatti also insisted that Barela lacks credibility, in part because of legal troubles. Court records obtained by Fox News show that Barela is on probation related to his work on a construction project without having proper licensing, and was ordered to pay nearly $50,000 in restitution.

But Bledsoe, on Monday, asserted that the paper trail was simply damning, telling Fox News, "This day has been a long time coming. ... I wouldn’t have believed this case if I had not seen the documents myself.”

"Mr. Avenatti is a big talker, but I don’t think there is anyway to get around the written record that we believe shows that he falsified the terms of the settlement agreement, denied receiving the settlement payment, and then spent his client’s settlement money," Bledsoe told Fox News, adding that the Los Angeles case involves an accusation of the "falsification of a settlement agreement and theft of client funds that is supported by straightforward documentation, including bank records, text messages, and emails."

Calling Avenatti's attacks on his client "disgraceful" attempts to misdirect, Bledsoe added: “Falsifying settlement documents and taking a client’s money is about as low as a lawyer can get. It appears that is what Mr. Avenatti has done."

"[Avenatti] is a corrupt lawyer who instead fights for his own selfish interest," Hanna said, adding that the allegations against the attorney "paint an ugly picture of lawlessness and greed."

Avenatti became famous as the lawyer for Daniels, the adult-film actress who alleged she had an affair with President Trump in 2006 while his wife Melania was pregnant with the couple's son, Barron. In the last year, Daniels and Avenatti became household names in their fight against Trump, dominating cable news shows for months and taunting the president in interviews.