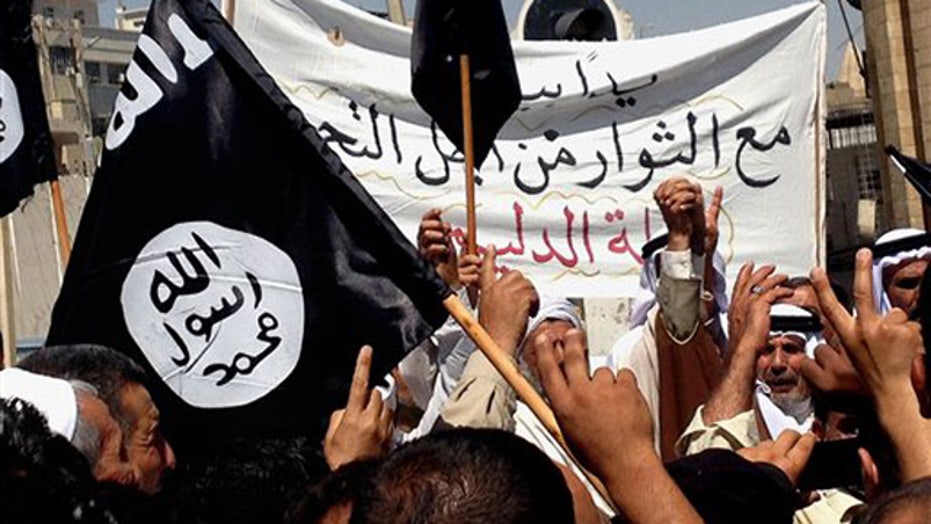 Will America fight al-Qaida in Iraq?

More Dirt at the V.A.

As Katie Interviews Kerry, A Debate Over Who Can Debate the Iraq Mess

It was like a scene out of 2003: Katie Couric interviewing the secretary of State about what to do in Iraq.

But rather than the “Today” co-host chatting with Colin Powell, it was the post-television Katie, now working for Yahoo, pressing John Kerry about the terrorists marching toward Baghdad.

With network correspondents like NBC’s Richard Engel again reporting from Iraq and Anderson Cooper having arrived there, the Kerry interview was a reminder that in 2014 you don’t need television to make news.

I can’t help being struck by the way events on the ground in Iraq have thrust the media back into a debate that the country thought it had left behind. And how the partisan blame game now extends to questioning which pundits should be “allowed” to weigh in on the crisis.

Kerry told Couric that the terrorists are posing “an existential challenge to Iraq itself,” that he’s willing to consider “what Iran might or might not be willing to do” in terms of cooperating with the U.S., and that “we are open to any constructive process here that could minimize the violence, hold Iraq together.”

On Sunday’s “Media Buzz,” Brit Hume told me why he believes the coverage of Iraq all but vanished, with a few exceptions, until last week:

“This was a war that was thought to be George Bush’s war, and it was also thought to have been concluded, even though we were still in the process of withdrawing. The story looked in the eyes of a lot of people to be over…So the decision was made to bail out of there. All hell was breaking loose in other parts of the Middle East, and Iraq looked relatively stable.”

And we noted that it’s expensive for news organizations to maintain Baghdad bureaus, especially after American troops departed and foreign conflicts erupted elsewhere.

Perhaps the most interesting debate about the media’s role in the current crisis is over who’s entitled to participate. Some of the early Iraq War enthusiasts from the right are resurfacing, and some left-leaning critics say their lousy advice in the Bush administration should discredit them and their opinions.

Two of the most prominent of the war-drum-beaters against Saddam, Bill Kristol and Fred Kagan, are back with a Weekly Standard piece. They say there is a consensus that a terrorist victory in Iraq would be disastrous:

“Th[e] alternative is to act boldly and decisively to help stop the advance of the forces of the Islamic State of Iraq and Syria (ISIS)—without empowering Iran. This would mean pursuing a strategy in Iraq (and in Syria) that works to empower moderate Sunni and Shi’a without taking sectarian sides…

“This would require a willingness to send American forces back to Iraq. It would mean not merely conducting U.S. air strikes, but also accompanying those strikes with special operators, and perhaps regular U.S. military units, on the ground. This is the only chance we have to persuade Iraq’s Sunni Arabs that they have an alternative to joining up with al Qaeda or being at the mercy of government-backed and Iranian-backed death squads, and that we have not thrown in with the Iranians.”

President Obama isn’t considering boots on the ground, and there is hardly a public groundswell for that course of action.

The Huffington Post declares a renewed war on the neocons under the headline “Iraq Hawks Are STILL Dominating the Media Debate”:

“The Sunday shows were heavily tilted in favor of guests who had supported the Iraq invasion or who supported current military intervention.

“‘Meet The Press’ was a veritable parade of hawks and war supporters. First up were Mitt Romney and Democratic senator Joe Manchin, who said he would support airstrikes in Iraq.

“David Gregory then turned to David Ignatius—who has apologized for his support of the Iraq War—New Yorker writer Dexter Filkins, Republican congressman and hawk Peter King and, last but not least, Paul Wolfowitz, one of the main architects of the war in the Bush administration. Gregory asked Wolfowitz if the administration had underestimated the sectarian divide in Iraq. Wolfowitz ducked the question. The conversation then moved on.

I’m always in favor of balanced bookings, but viewers can certainly assess the arguments of the Iraq hawks on their own.

The ultimate big-picture narrative here is the Obama versus Bush argument, which has resonance because in many ways the current president ran as the un-Bush, particularly on Iraq. Politico encapsulates it this way:

“Obama supporters see a president who found himself so deep in so many holes from his very first day in office that cleaning up the aftermath of the previous eight years was going to take at least eight of his own: getting out of Iraq and Afghanistan, stabilizing the housing market and repairing the larger economic collapse, all while chopping a $1.2 trillion deficit in half.

“To detractors, particularly those with allegiances to Bush, that argument comes off as another excuse for a president who’s been unable to deliver much — a man they see as so driven to be different from his predecessor that he’s often blundered into catastrophe. To them, the 2011 withdrawal from Iraq — on what they say was a politically driven timetable, not a strategic one — was the latest clear case in point.”

It is true that the terrorist victories would not be taking place without Bush’s 2003 invasion—but that Saddam might still be in power. It is also true that Obama’s 2011 withdrawal may have played a role in the current chaos—but we don’t know whether a residual force could have stopped this sectarian violence.

One thing is clear: It’s easier to point fingers than to figure out what to do now.

More Dirt at the V.A.

After Eric Shinseki was forced out, I questioned whether the media would move on or continue the hard work of digging into the scandal. Sadly, the story has largely faded.

But the New York Times has a great investigative piece, with on-the-record sources, that should make your blood boil. It’s not just that the long waiting times were covered up, it’s a culture of retaliation:

“Staff members at dozens of Department of Veterans Affairs hospitals across the country have objected for years to falsified patient appointment schedules and other improper practices, only to be rebuffed, disciplined or even fired after speaking up, according to interviews with current and former staff members and internal documents.”

Speaking of the NYT, Dean Baquet only recently ascended to the executive editor’s job, after the ouster of Jill Abramson, when he found out there was a malignant tumor on his kidney.

“Doctors discovered the tumor on Thursday, Mr. Baquet said, and felt that it required ‘immediate attention.’ He had ‘minimally invasive, completely successful surgery,’ he said, ‘and my doctors have given me an excellent prognosis.’”

That’s good to hear. He’ll be out of action for about a week.