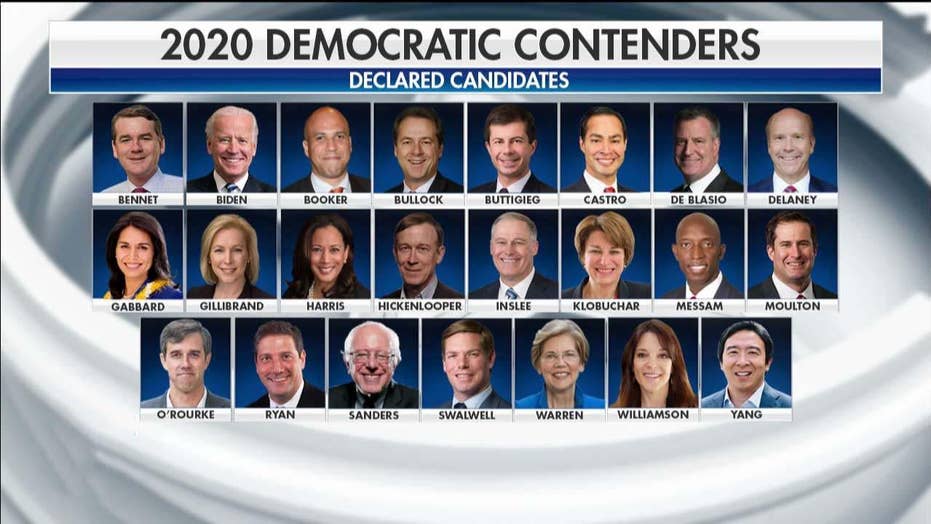 What do 2020 Democrats need to do to stand out? Reaction and analysis on 'Outnumbered.'

The Democratic National Committee is making it more difficult for presidential candidates to qualify for the third and fourth round of primary debates.

The doubling of the thresholds comes as some of the White House hopefuls still gunning to make the first and second rounds of debates – being held in late June and late July – are criticizing the DNC’s mandates to make the debate stage. They say it’s not the national party committee’s job to be “winnowing the field” so early in the race.

The DNC announced on Wednesday that to qualify for the third round of debates – which they say will be held on September 12 and 13 -- candidates must receive two percent or more support in at least four national or early voting state polls recognized by the national party. The threshold for the first two rounds of debates is one percent in three polls.

To make the third and fourth round – which the DNC says will be held in October – candidates must also receive contributions from a minimum 130,000 unique donors, as well as 400 unique donors in at least 20 states. The 130,000 threshold is double the 65,000 needed to make the debate stage at the first two rounds, and the 400 donors in each state is double the 200 currently needed.

The DNC’s mandating that the candidates clear both the polling and donor thresholds is a switch from the first two rounds, when the contenders only had to hit one of the criteria.

WHO'S RUNNING FOR THE WHITE HOUSE IN 2020

The party committee’s limiting the first two rounds of debates to 20 candidates – ten each during two consecutive nights. That means with an historic two dozen candidates now vying for the Democratic nomination and the chance to go head to head with President Trump, some of the White House hopefuls won’t make the cut.

"I don’t think the DNC should be winnowing the field early in the process,” Sen. Michael Bennet told Fox News on Tuesday as he was campaigning in the first-in-the-nation primary state of New Hampshire.

Bennet, whose entry into the race was delayed as he underwent cancer surgery in early spring, appeared to take a jab at the DNC, saying “I hope the metrics that they picked put the strongest candidates on the debate stage.”

His concerns were echoed by a rival, Rep. Tim Ryan of Ohio, who was also campaigning in the Granite State

“To start winnowing the field this early in the process I think isn’t the best way to go about doing it, because you need a chance for the American people to see you,” he told Fox News.

“It’s probably a little premature to start cutting people off, but it is what it is. The rules are what they are. I’m not going to complain about them,” Ryan added.

A few hours after the DNC released its new thresholds, another Democratic presidential candidate called for more transparency in the process.

Former Rep. John Delaney of Maryland, in a letter urged DNC Chair Tom Perez to "disclose the process you engaged in to determine the Criteria."

Delaney stressed that "the American people deserve a full and inclusive debate."

But longtime New Hampshire Democratic Party chair Ray Buckley – who served for years as a DNC vice chair – had a message for the candidates.

“If they believe they have a better plan, other than having three back to back debates each month with nine of the candidates at each, I’d be interested in hearing it.”

The DNC also announced on Wednesday that ABC News, in partnership with Univision, will host the third round of debates.