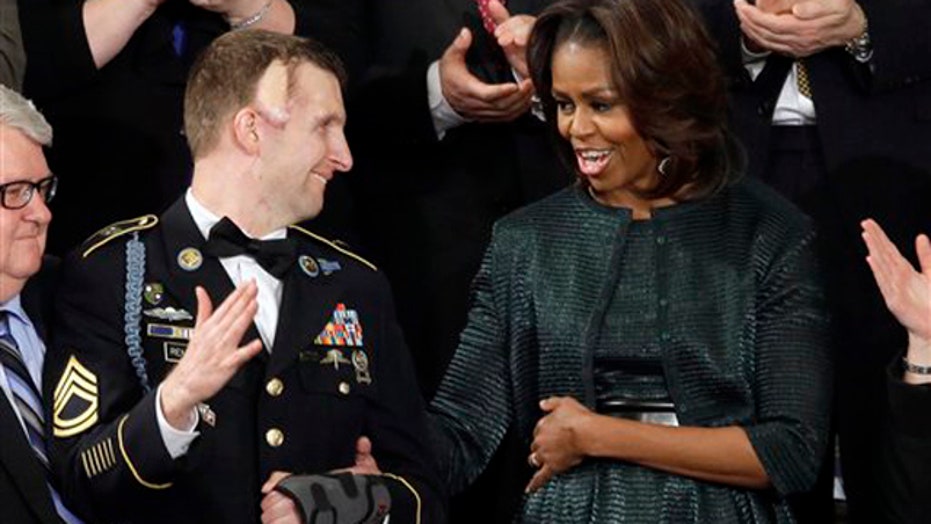 Army Ranger gets long standing ovation at State of the Union

President Obama's State of the Union address Tuesday night was interrupted more than 80 times by applause, but the longest ovation was for an Army Ranger recovering from injuries sustained on his 10th deployment.

Sgt. 1st Class Cory Remsburg, of Phoenix, Arizona, sat in the gallery between his father, Craig, and first lady Michelle Obama. He wore a bow tie under his uniform and had his left hand in a brace. He applauded by patting his right had on his chest.

At the rostrum below, Obama described how he first met Remsburg in 2009, at ceremonies commemorating the 65th anniversary of the D-Day landings in Normandy, France. The president described Remsburg as a "strong, impressive young man  [who] had an easy manner [and] was sharp as a tack."

A few months later, Remsburg was nearly killed by a roadside bomb near Kandahar, Afghanistan. his fellow soldiers found face-down in a canal, underwater, with shrapnel in his brain.

"The next time I met him, in the hospital, he couldn't speak; he could barely move," Obama said to the now-silent crowd in the House chamber. "Over the years, he's endured dozens of surgeries and procedures, and hours of grueling rehab every day."

Obama said that Remsburg remains blind in one eye and struggles to move his left side. But he's slowly learned to speak, stand and walk again. He's been awarded the Bronze Star and the Purple Heart.

"Like the Army he loves, like the America he serves, Sgt. 1st Class Cory Remsburg never gives up and he does not quit," Obama said.

Everyone in the chamber stood and applauded Remsburg for a minute and 44 seconds, the most sustained applause of the evening.

Remsburg stood, waved and gave a thumbs up. Obama returned it.

As Obama made his way out of the House chamber, Remsburg was helped up the steps of the gallery by his father. What was left of the crowd turned toward him again and applauded.