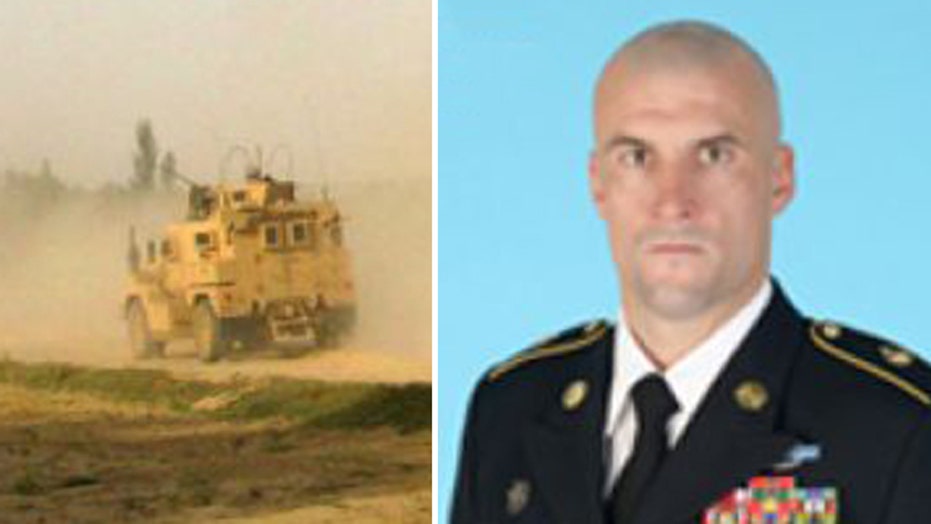 EXCLUSIVE: The U.S. Army is kicking out a decorated Green Beret after an 11-year Special Forces career, after he got in trouble for shoving an Afghan police commander accused of raping a boy and beating up his mother when she reported the incident.

"I am once again dismayed by the Army's actions in this case," Hunter, R-Calif., wrote in a letter to Carter.

Martland is described by many of his teammates as the finest soldier they have ever served alongside.

But his Army career changed course during his second deployment to Afghanistan in 2011. After learning an Afghan boy was raped and his mother beaten, Martland and his team leader confronted a local police commander they had trained, armed and paid with U.S. taxpayer dollars. When the man laughed off the incident, they physically confronted him.

They were punished by the Army at the time -- but why exactly Martland is now being discharged is a matter of dispute. Army sources cited his accolades, including being named runner-up for 2014 Special Warfare Training Group Instructor of the Year from a pool of 400 senior leaders in Special Forces, in questioning the decision.

As for the incident in 2011, Hunter told Carter: "To intervene was a moral decision, and SFC Martland and his Special Forces team felt they had no choice but to respond."

Casey, a former Green Beret teammate who would only use his first name since he is now a member of a federal counterterrorism team, told Fox News, "If I was a commander, I would have given him an award. They saved that kid's life."

Martland grew up south of Boston, in Milton, Mass. An all-state football player in high school, he set his sights on playing college football after graduating in 2001. Martland went for the Florida State University team, which just finished a season ranked #4 in the nation.

He made the team, impressing legendary head coach Bobby Bowden and famed defensive coordinator Mickey Andrews. Still, he often remained on the sidelines. When Pat Tillman, a former NFL football player who volunteered for the Army Rangers, was killed in Afghanistan in 2004, he saw Tillman's sacrifice as motivation to apply for another elite program. Martland dropped out of college and graduated in 2006 from Special Forces Qualification Course, one of the U.S. military's toughest training programs. Over the years he became a jumpmaster, combat diver and sniper.

After a deployment to Iraq in 2008, he deployed to Afghanistan in January 2010 as part of a 12-man unit. He and his team found themselves fighting large numbers of Taliban militants in volatile Kunduz Province.

On one mission, one of their vehicles was struck by an IED, setting off a Taliban ambush. Fox News is told Martland rushed to the scene. He jumped in the turret of a damaged Humvee, exposing himself to enemy bullets while returning fire to help his teammates gather sensitive equipment.

"I thought he was gone, then he comes out of nowhere to save us," said an active-duty Green Beret who requested anonymity.

Martland was awarded a Bronze Star with Valor for his actions. According to one evaluation, he also was "praised" by Gen. David Petraeus, then commander of U.S. and allied forces in Afghanistan.

But very quickly, the Green Berets realized they had a problem with many of the Afghans they were training to become local police officers.

"We had been hearing for months about raping in our province, not just in Afghanistan," said Daniel Quinn, a West Point graduate and the team leader of the detachment sent to Kunduz.

One day in early September 2011 at their remote outpost, a young Afghan boy and his Afghan-Uzbek mother showed up at camp. The 12-year-old showed the Green Berets where his hands had been tied. A medic took him to a back room for an examination with an interpreter, who told them the boy had been raped by another commander by the name of Abdul Rahman.

After learning of the meeting, Rahman allegedly beat the boy's mother for reporting the crime. It was at this point, the Green Berets had had enough. Quinn and Martland went to confront Rahman.

"He confessed to the crime and laughed about it, and said it wasn't a big deal. Even when we patiently explained how serious the charge was, he kept laughing," Quinn said.

According to reports of the incident, Quinn and Martland shoved Abdul Rahman to the ground. It was the only way to get their point across, according to Quinn. "As a man, as a father of a young boy myself at the time, I felt obliged to step in to prevent further repeat occurrences," Quinn said.

Rahman walked away bruised from getting shoved and thrown to the ground, but otherwise okay, according to teammates. But Rahman quickly reported the incident to another Army unit in a nearby village. The next day a U.S. Army helicopter landed and took Quinn and Martland away, ending their work in Kunduz Province.

For the next few weeks, both soldiers remained in Afghanistan but were not allowed to continue their mission. They were given temporary jobs in Mazar-i-Sharif in northern Afghanistan and later in Herat. Pending the outcome of the investigation, both men were relieved from their positions and sent home. Their war was over.

Quinn has since left the Army and started a job on Wall Street.

Martland, though, has been fighting to stay in the Army. In February 2015, the Army conducted a "Qualitative Management Program" review board. His supporters suspect because Martland had a "relief for cause" evaluation in his service record, the U.S. Army ordered Martland to be "involuntary discharged" from the Army by Nov. 1, 2015.

The U.S. Army could not confirm the specifics of Martland's separation from service due to privacy reasons, according to Wayne Hall, an Army spokesman.

Critics point to the Army drawdown as a reason. One former Green Beret said any negative mark on a soldier's record can get them kicked out, given the drawdown.

Martland still has received the highest scores in evaluations since the incident.

"It's sad to think that a child rapist is put above one of our elite military operators. Sergeant Martland was left with no other choice but to intervene in a bad situation. ... The Army should stand up for what's right and should not side with a corrupt Afghan police officer," Hunter told Fox News.

A childhood friend who went on to play in the NFL, Tim Bulman, said of Martland: "You would want him in your corner and protecting our freedom."